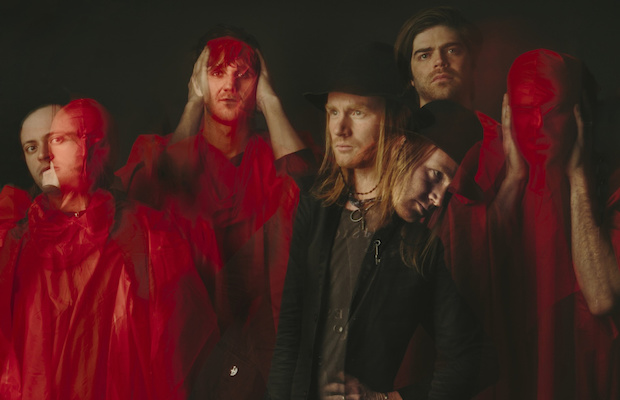 One of our most-anticipated package tours of the fall, beloved Omaha dance punk/new wave group The Faint return to Nashville for the first time in four years Oct. 10 at Mercy Lounge in support of their new career retrospective, CAPSULE:1999-2016, and they’re bringing along post-punk legends Gang of Four (what’s left of ’em in anyway), who are celebrating a new live album. Groups of monumental influence in two different eras of two different, but complimentary sounds, this pairing is all at once weird and exciting, and with opener Pictureplane, it’s likely to be not just one of the fall’s best shows, but one of the best of the whole year. You can still grab tickets right here, or, if you’re feeling lucky, we’re also giving away a pair of tickets to one lucky reader! Enter for a chance to win and find out more about the lineup below!

Formed just over 20 years in Omaha, Nebraska, at a time when the unlikely midwest town would become a musical hotbed, giving birth to beloved acts like Bright Eyes and Cursive, The Faint spent their earliest years embracing influences of post-hardcore, punk, and noise rock, before adopting a broader indie, dance punk, new wave, and post-punk sound with breakthrough 1999 effort Black-Wave Arcade. Their third album, 2001’s Danse Macabre, would propel the group to new heights, and is remembered as something of a modern classic and one of the seminal releases from tastemaking Omaha label Saddle Creek. Remaining active in the ensuing years, and producing several more fantastic records, The Faint finally began to slow down towards the end of the ’00s, never disbanding but largely retreating to the world of remixes and DJ work, before triumphantly springing back to life in time to support the deluxe rise of Danse Macabre, crafting a long-awaited sixth album, Doom Abuse, in 2014. Back with Saddle Creek, The Faint will release CAPSULE:1999-2016, a retrospective of cuts from their golden era plus a couple new tracks, on Sept. 30, celebrating a beloved musical history while keeping an eye on the future. Their latest singles prove that the group haven’t lost an ounce of their edge, and if they’re sounding half as good as they did when we saw their Danse Macabre tour a few years ago, the band’s Nashville return promises to be one epic, nostalgic night.

Perhaps the single most criminally under-appreciated post-punk band in regards to lasting and profound influence, UK rockers Gang of Four have been active off and on since 1977, famously and most prominently reuniting with their original, seminal lineup a decade ago. And, while members have ebbed and flowed, the team of vocalist Jon King and vocalist/guitarist Andy Gill remained the essential glue to keep the heart and soul of the group alive. Since the 2012 departure of King (following Content, their first album in over 15 years), and the exit of original drummer and bassist Hugo Burnham and Dave Allen in years prior, Gang of Four have become something of a shell of themselves, pairing Gill with newcomers, and leaning heavily on collaborators like Alison Mossart to share vocal duty with new single John Sterry on their latest recordings (specifically last year’s post-King LP, What Happens Next). While this is surely not the ideal incarnation of the group for hardcore fans, especially since the real deal existed not long ago, their latest tunes are not half bad, and their live show, for what it is, is still pretty stellar. The band seem to be feeling good about their sound these days too, as they released their first live LP (and accompanying DVD) in over 30 years, Live… In the Moment, earlier this month.

Winner will be announced Thursday, Oct. 6 at 1 p.m. CDT, and will receive one pair of tickets. Good luck!