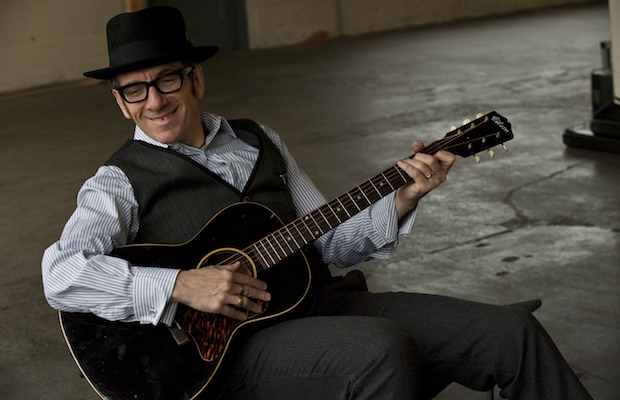 Legendary songwriter, performer, producer and musical trailblazer Elvis Costello is returning to The Ryman Auditorium on Oct. 17 for a night of incredible music from throughout his illustrious career. Dubbed the “Detour,” this solo run is a sort of an extended musical book tour in support of Costello’s recent memoir, Unfinished Music & Disappearing Ink, and marks his third Music City outing in just as many years. This stop, in particular, is extra special though, because New Orleans’ own Preservation Hall Jazz Band have been tapped to provide accompaniment, making Elvis’s performance a lot less “solo” than any other Detour stop, and adding an extra special element just for the Nashville crowd. Soulful and rootsy rockers Larkin Poe have also been tapped to open, and you can still snag tickets for this one of a kind show right here. We’re also excited to announce that we’re giving you the chance to win a pair of tickets on us, so read on for more info on the show and enter for your chance to win below!

One of England’s best musical exports, Elvis Costello has become one of the most influential artists, producers and songwriters in modern music. After signing a record deal in the 1970s, he became one of the pioneers of the British punk and new wave movement. Costello, along with his backing band The Attractions, initially climbed the charts in the U.K. with hits like “Watching the Detectives” and “Oliver’s Army.” In the 1980s, he crossed over into America with his signature track, “Everyday I Write the Book.”

Winner will be announced Thursday, Oct. 13 at 12 p.m. CDT, and will receive one pair of tickets. Good luck!