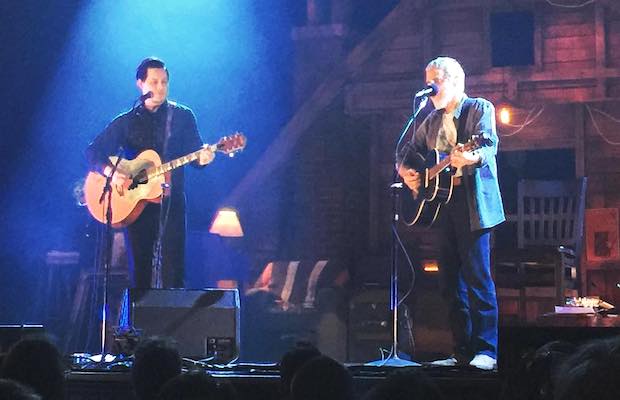 Yusaf Islam, commonly known by his former/musical stage name Cat Stevens, and now frequently referred to as Yusaf/Cat Stevens, played his first Nashville show in 40 years last night at the historic Ryman Auditorium. Unsurprisingly, the iconic singer-songwriter delivered an epic, career-spanning set, and even invited out a few guests, one of which was resident local rocker Jack White. Joining Stevens for a stripped down rendition of 1970 single “Where Do the Children Play,” towards the end of the first of two full sets, White’s presence was a definite surprise, though a natural fit for Yusaf’s wise, timeless folk-informed style. Later in the night, Louisville’s Bonnie ‘Prince’ Billy also emerged, to lend his talents to encore tracks “Welcome Home” and “All Kinds of Roses,” and, though he didn’t perform, rocker Kurt Vile appeared to be hanging around as well.

Check out a few Instagram clips of Jack’s collaboration below!

What a night! Could it be Jack White? Playing w/ Cat Stevens at the Ryman tonight! Singing “Where do the children play” this definitely made my day. #catstevens #jackwhite #ryman #nashville #wheredothechildrenplay #concert #livemusic #rhyminattheryman