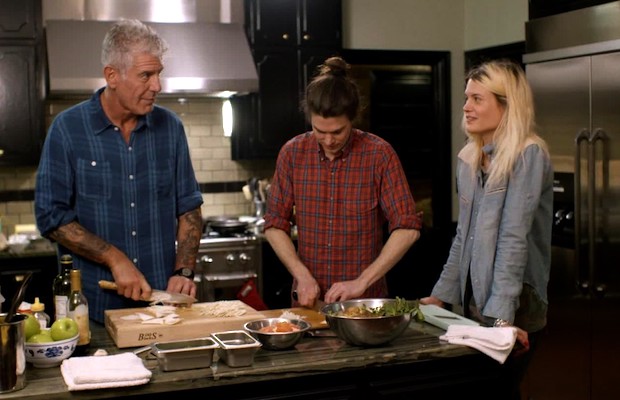 Back in the spring, we heard about continued sightings of acclaimed chef and television personality Anthony Bourdain, apparently in town to film an episode of his popular CNN show Parts Unknown, where he explores lesser known establishments, cuisine, and culture of cities around the world. This Sunday, the Nashville episode is finally set to air, and ahead of its release, CNN has debuted a few teaser clips. In one, Bourdain visits downtown meat and three Dandgure’s with famed musician and music industry figure Jesse Boyce. In another, he drops by Patterson House and the Catbird Seat to discuss new Nashville with restauranteur Josh Habiger.

The clip that really caught our eye, however, is one where Bourdain lets loose at local rocker Alison Mosshart’s Nashville home, nicknamed “Disgraceland,” making snacks alongside her chef brother Matthew, for an epic house party featuring a living room performance from Mosshart’s band The Dead Weather, attended by various local musicians and Third Man entourage. Check it out below!

Anthony Bourdain: Parts Unknown airs Sunday, Oct. 2 at 8 p.m. CDT on CNN. Other spots Anthony was spotted at include Husk (chef Sean Brock, a close friend of Bourbain’s, is also said to have served as his guide for other stops), Dino’s, Pinewood Social, The Crying Wolf, Edgefield, Duke’s, City House, and the home of pitmaster Patrick Martin (Martin’s Bar-B-Que), encountering guests like Margo Price, Ben Swank, and William Tyler. What may or may not make it to air is anyone’s guess, but you can tune in Sunday to find out!