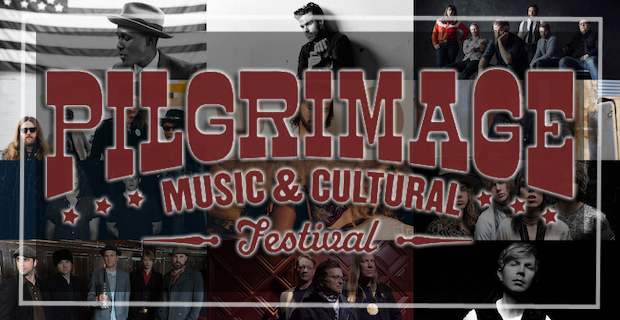 We’ve been buzzing about it for months, and the week has finally arrived, as we prepare to head to Franklin’s Park at Harlinsdale this weekend, Sept. 24 & 25 for the second annual Pilgrimage Music & Cultural Festival. We had a blast at last year’s inaugural event, and expect year two to be bigger and better in every way, thanks to an impressive lineup, even more buzz, and a year of positive experience to help streamline the event. With around 50 acts, both local and national, slated to perform across four stages over two days (not to mention a kids stage), plus local artisans and vendors, Pilgrimage is a community-rooted fest designed for music lovers of all ages and wakes of life, and we feel incredibly happy to have such a great new event in our backyard. Single day tickets and VIP options are still available here, so secure your spot if you haven’t already, be sure to download the official app, and start planning out your weekend with our handy festival guide. To get you ready to make the Pilgrimage, we’re counting down our 14 most-anticipated Saturday performers below!

New York bred, Nashville based singer and fashion designer Jonny P channels both the look and sound of a classic ’60s era Motown artist, funneling a timeless sense of soul and r&b into his personal and uplifting sound. A friend and collaborator of Leon Bridges, and, with his wife, the owner of local clothing brans J&HP, Jonny released his debut EP, Right to You, a couple years ago, and has new music in the works.

Hailing originally from Iceland, but now based in Austin, folk-tinged, bluesy garage rockers Kaleo first found success is their home country and throughout Europe with their eponymous, 2013 debut LP, before breaking through stateside with last year’s A/B, fueled by tacks like “Way Down We Go” and “No Good.” Eclectic, complex, and broadly accessible, Kaelo have proven to be a a great rising fixture on the festival scene in recent years.

While, lately, you might best recognize local singer-songwriter Trent Dabbs for his role as one half of buzzy duo Sugar & The Hi-Lows, along with Amy Stroup, his long running solo career has been just as celebrated and even more prolific. Dabbs’ poppy, soulful rock music has been featured in countless films and TV shows, and the list of big names he’s written for, collaborated with, and performed alongside is jaw-dropping.

Though Canada’s The Strumbellas have been around since ’08, there’s a good chance that if you recently discovered them, it’s thanks to inescapably catchy single “Spirits,” from last year’s Hope, their third album. Blending elements of folk, alt country, and indie pop, the Juno-winning sextet are unique and fresh, managing to stand out in a musical landscape stuffed with folk-infused pop, and bridging two sides of the fest’s musical focus.

Made up of siblings Elliot and Natalie Bergman, Chicago’s Wild Belle incorporate broader world music influences with afrobeat rhythms and jazz, funk, reggae, and ska elements to form a unique and electro-laced flavor of indie pop. After their gorgeous debut Isles, a Major Lazer collaboration helped introduce them to a wider audience, and this year’s Dreamland marks an even more focused, experimental effort with wide commercial appeal.

Local rockers Blackfoot Gypsies are a group we’ve been raving about for a number of years now. Their frenetic live show is a call back to rock and roll’s golden age, and with a nod to blues and country in their driving rock sound, the band, originally a duo but fleshed out with a full lineup since their latest, Handle It, are one of Nashville’s best, most underrated acts. Absolutely primed for a festival stage, expect them to steal the show!

LISTEN | “Don’t Know About You”

We’ve seen Texas troubadour Shakey Graves at more festivals than we can count at this point, and we’ll never stop recommending him as a must-watch act. Originally conceived as a one-man band, though he regularly invites a backing band out these days, Graves’ earnest, Americana stylings and versatility have earned him something of a cult following, and, especially in Nashville, his shows are consistently unique and memorable.

Given his immense talent, big-name fans and collaborators, and constant critical acclaim, it’s amazing that Nashville based, Mississippi raised alt country singer-songwriter Cory Branan isn’t yet a household name. His personal, insightful style and live humor and charisma make Branan one of the best around, and he frequently crosses genre lines to collaborate with musicians from the indie rock and even punk world. Fittingly, he’s playing the most intimate Pilgrimage stage.

When local transplants Nawas played Pilgrimage last year, we knew very little about them, other than they’d formed in New Orleans and had a handful of promising early tracks floating around. They blew us away at that performance, and have since released a serious of polished, poppy, and primed new electro-laced singles, fast establishing them as one of the buzziest bands to watch amidst Nashville’s flourishing pop scene. Show up early and see what they’re all about!

Best known and celebrated for fronting Vermont-based roots rock group Grace Potter and the Nocturnals, skilled singer-songwriter Grace Potter has been trying her hand at a solo career for the last couple of years, landing an impressive debut with last year’s glorious pop rock effort Midnight. An accomplished and transformative performer, Potter, in any incarnation, is a wonderful addition to any festival lineup, and we’re happy to see her back in Nashville so soon!

Having seemingly erupted out of nowhere to become rock and roll’s next big “it” band, The Struts hail from the UK, and harbor something of a retro sound funneled through a modern lens, pulling from classic and arena rock, hair and glam metal, ’80s post punk, and contemporary indie, punk, and alternative. With only one full-length to their name, The Struts have already opened for legends like The Rolling Stones and Guns N’ Roses, with frontman Luke Spiller drawing comparisons to Mick Jagger and Freddie Mercury. Perhaps the biggest buzz band on the lineup, this set is sure to be a highlight.

LISTEN | “Put Your Hands Up”

WATCH | “Could Have Been Me” (Official Music Video)

25 years into their career, west coast alt rockers Cake are certifiable modern legends in the alt rock scene, remembered best for smash singles like “The Distance” and “Shirt Skirt/Long Jacket,” but rounded out by a catalogue of some unbelievable songs. Incorporating elements of hip hop, folk, Mariachi, funk, and more into their eclectic, trumpet-laden rock sound, and noted for singer John McCrea’s sarcastic lyricism and monotone style, the long-running act, despite some lineup shuffles, have never slowed down, their last LP arriving in 2011, and the promise of new music on the way.

Since forming in 1980 in Madison, Wisconsin, Violent Femmes have served as something of underground punk trailblazers, finding recognition at a time when the first wave of American punk had all but died down. Since reuniting in 2013, the band, helmed by core duo Gordon Gano and Brian Ritchie (original drummer Victor DeLorenzo remains on-again off-gain), have experienced some of a second (er, third?) wind, producing their first album in 16 years, We Can Do Anything, earlier this year. Their offbeat, folk-influenced alt punk sound is now legendary, and live, the Femmes are an uncontainable and infectious force.

LISTEN | “Blister in the Sun”

Above any other performer announced this year for Pilgrimage, legendary artful alt rocker Beck served not only as perhaps our most anticipated, but also the clearest sign that year two of the fest is set up to surpass the first. Something of a musical chameleon, Beck first catapulted to critical and commercial acclaim more than 20 years ago, and has since crafted some of the most diverse, eclectic, experimental, and beloved albums in modern musical history. A certifiable icon, and sure to be remembered as one of the greatest artists of his generation, Beck’s live show is a transcendent experience, and he’s an invaluable addition to any festival lineup. Sure, it’s easy to rank the headliner at #1, but in this case, the headliner happens to be one of the greatest living artists of all time.