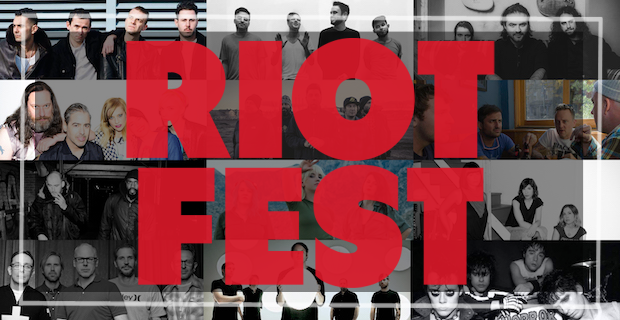 What began as a modest multi-venue club festival in Chicago just over a decade ago, and has, over the years, grown to become the city’s second-largest music fest, just behind Lollapalooza, the punk-centric Riot Fest is now a certifiable institution, spawning spinoffs in various other cities across North America (this year, Denver), while doubling down on its Chi-Town roots, with jaw dropping, headline grabbing lineups and major reunions in recent years. This weekend, Sept. 16-18, Riot Fest returns to its new home of Douglas Park, adopted last year, and with a bill headed up by Morrissey, The Flaming Lips, and a reunion of the original Misfists more than 30 years in the making, the event reigns as not just one of the year’s best punk festivals, but one of the best festivals around period. Per usual, Riot Fest Chicago’s entire bill is absolutely stacked from top to bottom, even including a few Nashville favorites, and we’re thrilled to announce that we’re road-tripping north to bring you full coverage, winding down what has been one stellar, busy festival season! In case you’re ready to Riot too (or if you’re joining us from elsewhere), we’ve put together another handy festival guide, where we’re counting down our top picks for each day. Grab tickets here if you still need ’em, find full festival details (along with after party info and more) right here, and check out our picks below for 15 Sunday acts you don’t want to miss!

Hailing from Brooklyn, buzzy up and comers The So So Glos are a punk outfit we’ve long had our eye on, and we’ve told you about their numerous Nashville outings in the past. With a raw indie punk sound and a fiercely DIY attitude, the band have quickly become a fixture in the New York punk scene, and 2013’s Blowout along with this year’s latest Kamikaze, are among some of our favorite releases in recent memory!

One of the smaller, newer bands on Sunday’s bill, New Jersey post-punk outfit Can’t Swim are a definite group to keep an eye on. Newly signed to tastemaking Pure Noise Records, the genre-bending band, who formed just last year, snuck in one of 2016’s best efforts, their Death Deserves a Name EP earlier year, and it’s so good that they’re likely to ascend to new punk heights in no time. See what all the hype is about in person.

Regular readers and those of you joining us from Nashville surely know the name The Wans by now, and hopefully you’ve also seen them rocking out around town in recent years. Channeling a sound that blends ’60s fuzz and proto-punk attitude with ’90s alternative and grunge, the group set the bar even higher with their latest EP, Run Baby Run, and their frenetic, loud, and straight up rock and roll live show never disappoints.

Reunited as their “classic” They’re Only Chasing Safety era lineup, beloved post-hardcore outfit Underoath recently mounted a reunion tour where they played both that album and Define the Great Line in full. Their Riot Fest set likely won’t be long enough to do the same, but expect a show heavy on cuts from both classic efforts, and perhaps even some new tunes, as the band seem intent on keeping this thing moving forward once more.

LISTEN | “Writing on the Walls”

Fronted by Kathleen Hanna (ex-Bikini Kill), New York’s The Julie Ruin came together in 2010, but have really hit a stride this year thanks to their fantastic new album Hit Reset. Their punk-derived pop and dance rock sound, along with strong feminist and social themes, make them feel like a logical extension to Hanna’s prior work, and their live show is very bit the smart, electrifying, fun, and solidly punk experience you’d expect.

A bombastic and ever-changing musical force, the Deftones have been going strong for almost 30 years at this point, proving along the way to be one of the most enduring, evolutionary, and influential acts in the metal scene. Their visceral, intense live show and genre-bending sound gives them a transcendent appeal, making them phenomenal festival performers, and with eight albums to date , their catalogue is rich and eclectic.

Rob Zombie‘s Riot Fest appearance alone would be welcome news, but the heavy metal trailblazer turned accomplished horror director has something extra special in store: a full performance of his former band White Zombie’s 1995 fan-favorite final album, Astro-Creep: 2000. Since it seems like a proper White Zombie reunion is not in the cards, this could be the closest, most authentic experience you’ll ever find.

Discreetly added to the Riot Fest lineup without any fanfare, and sandwiched among some brutal scheduling conflicts, Chevy Metal are a band you should still prioritize, if only for a few songs. Led by Foo Fighters drummer Taylor Hawkins, the band play classic cover songs, largely hits from the ’70s and ’80s, with a sincere, fun-loving spirit. At times they’ve served a full-on alter ego for the Foos, but don’t expect o see Dave this time around.

LISTEN | “Width of a Circle”

Based in Chicago, The Falcon are something of a punk rock supergroup, featuring Brendan Kelly of The Lawrence Arms, Neil Hennessy (current Lawrence Arms, ex-Smoking Popes), Alkaline Trio’s Dan Andriano, and Dave Hause of The Loved Ones. The band just released their sophomore album, Gather Up the Chaps, after a 10-year wait, and given their local cred and intermittent activity, their Riot Fest set feels just not appropriate, but essential.

As much as an experimental, visual art exhibition as they are a band, west coast experimental hip, punk, and industrial rock group have been often lauded for their high-concept, genre-bending, and intense style and compelling presentation and performance. Edgy, unique, and all over the map, the band, despite “breaking up” a couple years ago only to form shorty after, are one of the most bombastic and progressive modern musical entires in existence.

Bleached released their sophomore LP, Welcome the Worms, earlier this year, and the buzz and recognition since has been swift. Formed by Jennifer and Jessica Clavin of Mika Miko, Micayla Grace of Leopold & His Fiction, and Nick Pilot, and LA band’s breezy pop punk sound and personal writing style has made them one of the most exciting up and coming acts in punk, with a fun, earnest, and engaging live show to match.

LISTEN | “Dead in Your Head”

Formed during the punk boom of the Pacific Northwest in the early ’90s and forged by the riot grrrl movement, Sleater-Kinney are, without a doubt, one of the best rock bands of the generation. Finding  critical acclaim in the ’90s and broader commercial appeal in the ’00s, the now legendary group called it quits a decade ago, only to reform in 2014, producing their first LP in 10 years and an instant classic, No Cities to Love, last year.

Seminal Los Angeles punks Bad Religion are nearing 40 years as a band, and have, so far, forged a legacy that makes them one of the greatest punk acts in history, influencing countless other bands and largely helping shape the punk explosion of the ’90s. Though they’ve remained pretty consistently active, and even continue to produce new music, the group’s prestige and the vibe of Riot Fest makes theirs feel like a unique  and important set, and you absolutely should not miss.

Riot Fest Chicago marks Thursday‘s fourth show since mounting a surprise reunion earlier this year, the others being Riot Fest Denver and two spots at Wrecking Ball. One of the most beloved and successful post-hardcore bands of the ’00s, the group’s return feels especially genuine and fan-focused. They only have two more shows on tap, and an uncertain future beyond that, so whether you want to welcome back an old favorite or experience a band you never had a chance to during their run, you should see them in person while you can!

LISTEN | “War All the Time”

Obviously, The Misfits made our top spot (we normally don’t just put every headliner at #1, we swear, Riot Fest just knocked them out of the park). Being billed as “The Original Misfits,” this incarnation of the legendary horror punk group reunites Glenn Danzig, Jerry Only, and Doyle Wolfgang von Frankenstein (plus Slayer drummer Dave Lombardo) on stage for the first time in 33 years. Their debut at Riot Fest Denver drew unanimous praise, and, despite the name staying in use for less-complete versions of the group, don’t be fooled: this is about the most authentic incarnation of the Misfits you’re ever going to get, and it could be your only chase to see them until we’re told otherwise. Stay to the end, thank us later.