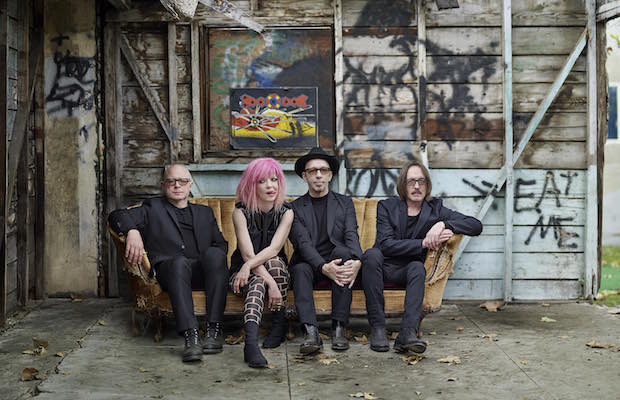 Alt rock legends Garbage are still going strong more than 20 years after their eponymous debut made them a household name. Out in support of their new sixth album, Strange Little Birds, the influential rockers return to Nashville tonight, July 20 for the first time in 14 years, along with Kristin Kontrol (formerly of Dum Dum Girls), for a performance at The Ryman that’s sure to go down as one of the year’s best. This is a show you absolutely don’t want to miss, and, fortunately, a handful of tickets still remain right here. Secure your spot to soak up a piece of musical history, and find out more about the show below!

It’s been just over two decades since Garbage triumphantly debuted amidst the booming ’90s alternative scene, propelled by the critical and commercial success of their eponymous 1995 LP. Fronted by Scottish singer Shirley Manson, the group formed when bandmates Duke Erikson, Steve Marker, and Butch Vig sought to form a new musical project that complimented, but differed the grunge boom of the era (which Vig helped cement with his production work on Nirvana’s Nevermind), and discovered Mason when they saw a music video from her former project, Angelfish, on MTV. The band’s chemistry clicked, and soon, propelled by hits like “Vow,” “Queer,” “Stupid Girl,” and “Only Happy When It Rains,” they were fixtures of the ’90s rock landscape and certifiable stars. Always hard to classify, Garage have benefitted from their eclectic palate of influences and their ingrained production chops, seamlessly weaving between elements of alternative, pop, trip hop, shoegaze, techno, and more. After a series of successful followups throughout the ’90s and ’00s, high-profile world tours, and even a James Bond theme, the band went on something of a hiatus around 2005, only to reemerge in 2012 with fifth album Not Your Kind of People, their first independent effort. Following a 20th anniversary run in celebration of Garbage last year, the iconic rockers just dropped another new LP, Strange Little Birds, reasserting their relevance, innovation, and adaptability more than two decades in. A seasoned and compelling live force, Garage should, without a doubt, be on your musical bucket list.

Best known for founding and fronting indie rock group Dum Dum Girls (under the name Dee Dee), Kristin Welchez, now operating as Kristin Kontrol, just released her first solo effort under the new musical moniker earlier this year, X-Communicate. Much more contemporary, poppy, and sweeping than her former outlet, Kristin Kontrol is a distinct new chapter for Welchez, and an exciting start to what we hope will be a long and prolific solo run. She’s well paired for this show, so show up early and take in something new and exciting!