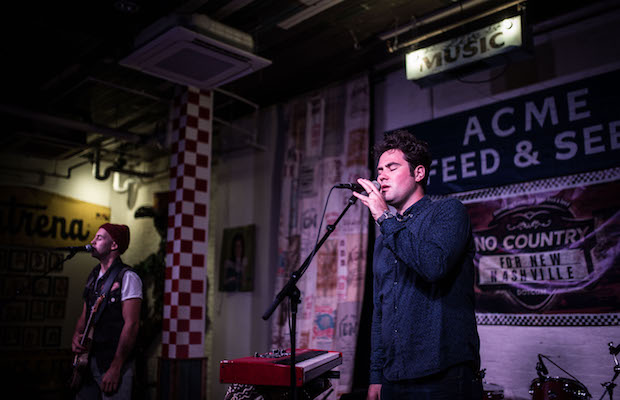 Our long-running, free Acme Feed & Seed showcase series has switched to a bi-montly format for 2016, but that doesn’t mean that the showcase is ever lacking in awesome local, and sometimes national, talent. For the May 24 installment of No Country Presents we were pleased to welcome traveled folksters The Walking Guys, the big band sounds of Doran Danoff, and, for a return Acme/No Country performance, Walking Man. Read on for a full recap, and check out some great shots from contributing photographer Nolan Knight. 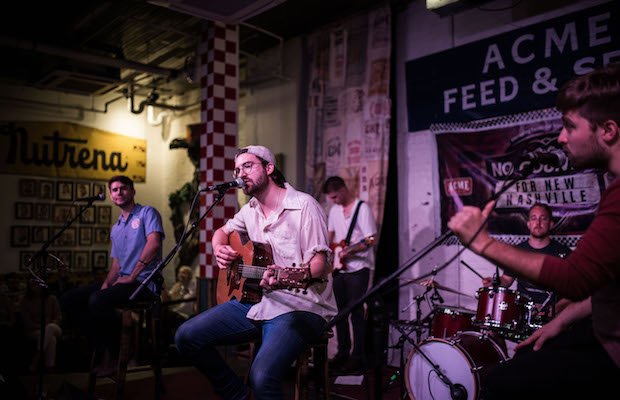 After strolling several blocks from my sometimes available, secret, free parking alley downtown, I couldn’t help but think of our first band; The Walking Guys. After doing some research for the preview post I’d written about the showcase, I’d learned that members of the band had hiked the Appalachian Trail with their instruments, from Maine back to Tennessee, playing wherever they felt welcome along the way. This simple concept and lust for adventure has now turned into a full blown southern flavored folk/Americana band, and I was stoked to be catching them live.

Switching off lead singing responsibilities between the three core members, but always maintaining beautiful harmony, The Walking Guys had the perfect level of mellow and guitar strumming charm. They were the ideal way to warm up the very large dinner crowd at Acme. Depending on who was taking the lead, their sound had some country fried twang, or Bob Dylan resonance, or even pop polish. On acoustic guitars they hammered out the rhythm, while an electric Fender and drum brushes laced the background. The local talents seem to have brought a sizable fan base as well, as many people in the standing room only crowd were singing along. They played a great song about the worst woman any of them had ever met, a number I really liked called “Wondering Man”, but the highlight had to be the sing-songy ditty about PBR they did towards the end of their set. All in all it was obvious that the extended hiking trip had created a chemistry in this group that will only  improve as they continue to grow as a band. 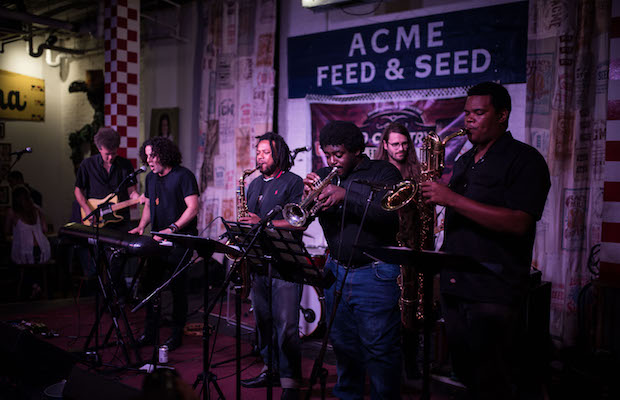 Next up was Doran Danoff and his impressive stable of musicians. One of the larger bands to grace our showcase with Acme, Doran’s group featured him on keys/lead vocal, tenor sax, baritone sax, trumpet, electric guitar and bass, plus drums. From the jump, it was obvious every single one of them had performed together before. The seemingly well rehearsed set was as clean and precise as any we’ve hosted, and I was thoroughly impressed with the frontman’s natural flowing charisma. After sound check was complete, and the players were in place, they immediately they hit us with the funk. It was their first time ever playing Nashville, let alone the hallowed gutters of Broadway, and they did not disappoint. Danoff was truly the band leader, allowing all the performers the chance to shine, although the brass bravado is what I was liked the best. When he sent the brass section off to focus on a more stripped down interpretation of “Tallest Man,” I was genuinely moved by the quality of his lyrics as well.

His brass returned for a newer song, “World War Five,” and brought the vibe back up to full blown rock ’n’ roll dance party. He writes arrangements similar to an Elton John or Billy Joel, but manages to keep it extra fresh and more grounded than the sometimes flamboyant and slightly ego-centric piano-man super stars. His first ever attempt at performing “Party Treats” live with a band also went exceedingly well, and got most of the people still in attendance on their feet. By the time they’d finished it was safe to say their Music City debut was an astounding success. 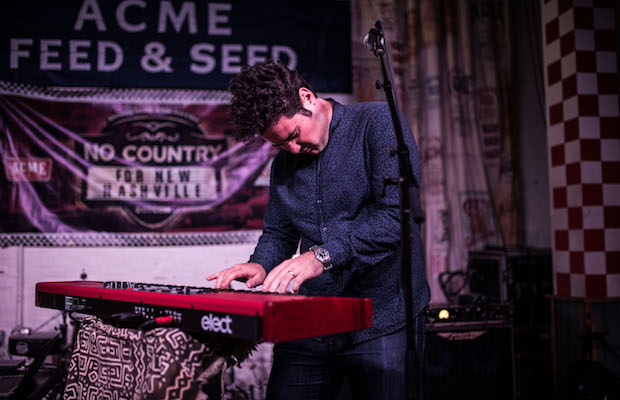 Topping off yet another great night of tunes were return performers Walking Man. They played Acme for us once already in the middle time slot, and we enjoyed them so much we asked them back as closers. This time opting for their typical two-man arrangement (the first time they performed a bassist had been added), their minimalist but profound psych folk meets LCD Soundsystem analog electronica was never clearer. Despite having just two members, their sound is huge, and it’s obvious they’ve put a lot of time into building layered songs through the keyboard and effect pedals. There isn’t a wasted moment, not a second when they aren’t intensely focused on what comes next in a particular arrangement. The lead vocal is very authoritative without being overbearing, a much oft-maligned skill, considering I’ve seen so many push their voices too hard, sounding intrusive to the harmony of any given song.

They jammed some of the more familiar tracks from their self-titled EP, and played some quality new stuff too, mentioning that a new record is due out this summer. The crowd that stayed seemed to thoroughly enjoy what Walking Man (no relation to openers The Walking Guys) had to offer, and we can’t wait to hear more off the new record! And that was that, another showcase in the books, but while you’re here, enjoy the photo gallery courtesy of photographer Nolan Knight, and join us June 21 for Canyon Spells, The Deer, and Rebecca.