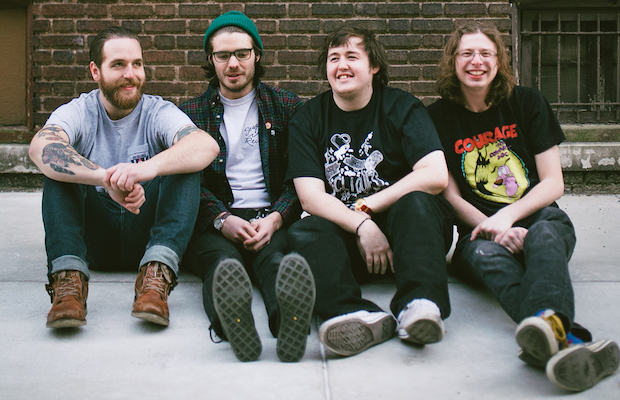 Out in support of their fantastic third album, Holy Ghost, Philadelphia indie/emo/punks Modern Baseball return to Nashville tonight, May 25 to play Exit/In with like-minded buzzworthy rockers Joyce Manor and up and comers Thin Lips. This trio of acts showcase some of the best of the DIY punk scene, with pop sensibilities, earnest and emotional songwriting, and personal and engaging performance styles, exemplifying why this genre has found a well-deserved resurgence in attention in recent years. Tickets for this evening’s show are still available right here, and, below, you can find out more about the lineup!

Modern Baseball began, as many bands do, simply as a musical bond between teenage friends, Jake Ewald and Brendan Lukens, who serve as the group’s co-frontmen and core songwriters. Soon after self-releasing their first EP in 2011, the pair moved from their native Maryland to attend separate colleges in Philadelphia, where they continued work on Modern Baseball, self-recording and self-producing their full-length debut, Sports, and recruiting bassist Ian Farmer and drummer Sean Hubber to round out their lineup. A wave of positive attention would soon follow, and, embraced by the DIY scene in Philly and beyond, the band began to tour, nabbing the attention of tastemaking label Run For Cover Records, who released their self-produced, breakout sophomore LP, You’re Gonna Miss It All. Hard to pin down, Modern Baseball navigate the waters of emo, indie rock, and pop punk, characterized by a juxtaposition of goofy self-awareness and heartbreaking and raw emotional earnestness. Now focusing full time on music, the group have clocked countless hours on the road, sharing the stage with big names like The Wonder Years, all the while gaining a reputation for being one of the best, most authentic acts of the revivalist indie punk scene. On their latest LP, Holy Ghost, Modern Baseball have achieved their most cohesive, mature effort to date, chronicling the past few years of life events and personal struggle, some of which nearly ripped them apart, before triumphantly emerging with more focus and purpose than ever. The record is effectively a split, with Ewald taking lead on the A-side songs, and Lukens on the B-side (think emo Outkast), and, already, it’s a strong contender for one of the year’s best. Be there tonight and see what all of the buzz is about.

Like Modern Baseball, Torrance, California’s Joyce Manor have managed to achieve both organic, indie punk authenticity and broader critical recognition from outlets too “cool” to cover anything that might be labeled pop punk or emo just a few short years ago (that “emo revival” is really just a revival in interest; the bands never left). Over three fantastic full-lengths, their best and most recent 2014’s Never Hungover Again, the band have honed a knack for crafting driving, loud, resonant punk songs about heartbreak, loneliness, drunken nights, and broken homes, winning over fans and critics with their genre-bending sound and raw honesty. Influenced as much by artists like Weezer and Morrissey as by ’90s emo, early ’00s pop punk, and scene peers like Hop Along, Tigers Jaw, and Title Fight, Joyce Manor are an absolute band you should know if you’re a fan of the modern, flourishing, indie punk landscape.

Philly punks Thin Lips are signed to Lame-O Records, the boutique indie label founded by Eric Osman to release Modern Baseball’s debut. They only dropped their debut full-length, Riff Hard, last week, but, already, have been building up buzz in their hometown with their hard-hitting, personal and charming flavor of pop-laced punk. Needless to say, they’re perfectly selected to kick off this show, and you’ll definitely want to show up early to see what they’re all about.