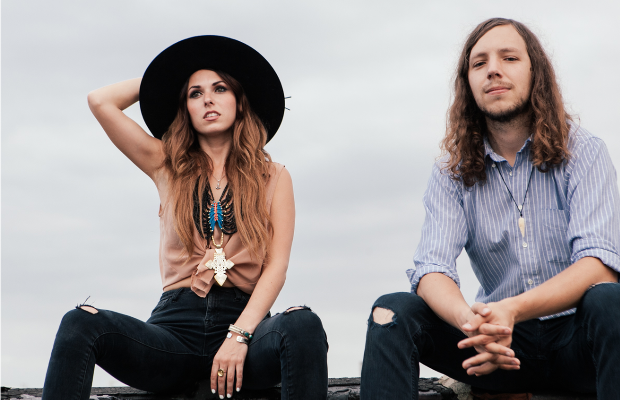 Come out and party with super cool alt-country, cowboy-noir rock band Escondido as they celebrate the release of their brand new (and very amazing) album, Walking With a Stranger, tonight, April 22 at Mercy Lounge! If you’re anything like us, you’ve been hearing echoes of these new songs at the groups’ local shows over the past year and are so excited to finally see this record come to fruition. Take advantage of living in a town like Nashville and rock out like a hometown crowd should. Show starts at 9 p.m. with opener Birdtalker. Tickets are just $10 and the show is 18+. Read on for more info!

Escondido are comprised of two powerhouse singer/songwriters, Jessica Maros and Tyler James, who joined forces in Nashville after moving here separately. The pair released their eerie, twangy debut album The Ghost of Escondido in 2013, and it quickly earned such amazing descriptions as sounding like “desert sex.” New album Walking With A Stranger opens the same as their debut does, with a single lonesome desert trumpet. However, one can also hear in the new album a more defined, refined, better-focused and more mature sound for the band. Plus the songs are super catchy. (Have we mentioned that we’ve been hearing this songs for a little while now and are VERY excited to have a recording of them?) They’re fresh off the west coast leg of their nationwide tour in support of the record and long story short, this is a local band Nashville should be proud of. Go catch their release show tonight and buy a record, you won’t regret it.

Birdtalker are the outcome of a slow coming together of friends and spouses until all of a sudden a band was formed! You may have caught the Nashville-based act playing around town, including recently at the World Water Day Celebration or at The High Watt opening for The Strumbellas. Melodic and melancholic, the band is currently working on their debut EP. Catch a preview tonight at Mercy Lounge!