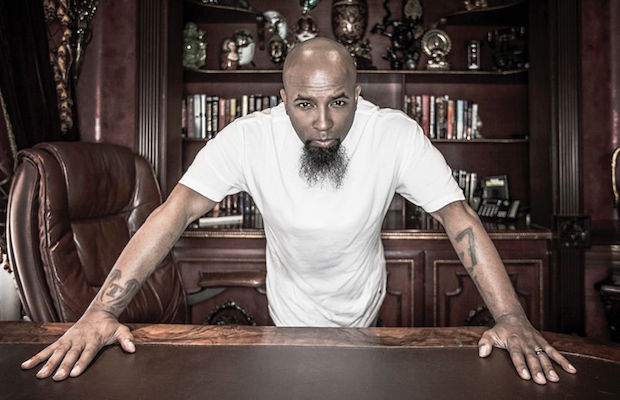 Acclaimed underground rapper and Strange Music labelhead Tech N9ne returns to Nashville tonight, April 7, for a performance at Marathon Music Works with a huge stable of talented artists on his label: Krizz Kaliko, Rittz, ¡Mayday!, Stevie Stone, CES Cru, and Brian Brown. Tech has seen a big boom over the last few years, thanks to some of his most polished efforts, and highest-profile collaborations, to date, so there’s never been a better time to see this underrated MC in action! Grab your tickets here and read on for more about the show!

Hailing from Kansas City, MO, Tech N9ne, born Aaron Yates, became attracted to hip hop at a young age, finding a taste of success through his first group Black Mafia in the early ’90s. After several years of more collaborative efforts to varying degrees of attention, Tech and his business partner launched their own record label, Strange Music, in 1999, opening the door for a barrage of independent success throughout the ’00s. Known for his “chopper style” technical flow (his stage name was derived from a “TEC-9” handgun, but he’s since added the “technical” implication to its meaning), often dark lyrical themes, and expansive and genre-bending influences, Tech has become one of underground hip hop’s most prominent and well-respected figures, with 16 albums (six a part of his guest-heavy “collabo series”) under his belt in just 13 years, and another slated for release this fall. If you need further confirmation of his respect with the scene, just take a peak at all of the features on his records, which include Kendrick Lamar, Eminem, Snoop Dog, Lil Wayne, T.I., Cee Lo, Busta Rhymes, Wiz Khalifa, and even The Doors.

A longtime collaborator of Tech N9ne, rapper and songwriter Krizz Kaliko also hails from Kansas City, and is signed to Tech’s Strange Music label. His sixth album, GO, is slated to drop tomorrow, so expect to hear lots of new tunes.

We’ve told you about rising MC Rittz in the past, thanks to his associations and tours with localish rapper YelaWolf, but his ties to Tech N9ne run even deeper. Also signed to Strange Music, Rittz harbors a quick, clipped, technical flow similar to his labelhead, and will drop his third LP, Top of the Line, this May.

Known for helming production duties and collaborating on lots of Tech N9ne’s work, Strange Music group ¡Mayday! hail from Miami, and are made up of  rappers Bernz and Wrekonize, producer and multi-instrumentalist Plex Luthor, percussionist NonMS, drummer L T Hopkins, and bassist Gianni Cash. Their style is expansive, composition heavy, and influenced by rock almost as much as it is hip hop.

St. Louis rapper Stevie Stone has been releasing albums with Strange Music since 2012, and his latest, last year’s Malta Bend, has garnered the most attention yet. With a ferocious flow and heavy production, Stone seems poised for mainstream crossover appeal.

Also from Kansas City, CES Cru are made up of Donnie “Godemis” King and Mike “Ubiquitous” Viglione. After a few early lineup changes, the now-duo came to the attention of Tech N9ne in 2009, and he subsequently signed them ahead of their two most recent, and best efforts. Their energetic flow and in your face delivery is unparalleled.

We’re actually not entirely sure who Brian Brown is, but given the caliber of the rest of this Strange Music crew, we’re sure you’re going to like him.