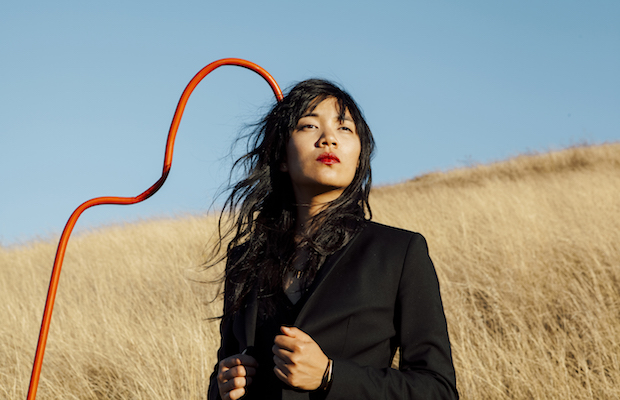 Alternative folk rock band Thao & the Get Down Stay Down are just coming off the release of what critics are calling songwriter and frontwoman Thao Nguyen’s most confessional, and risk-taking, album to date, Man Alive!. The group are swinging by Mercy Lounge tonight, April 6 during their tour supporting the new record along with indie folk rock quintet Saintseneca.

Man Alive! was produced by Tune-Yards’ Merrill Garbus and features heavier experimentation with electronic sounds, bass, and beats than Nguyen’s previous music. Going off that theme of sonic experimentation, Nguyen and Garbus recently appeared in a hilarious Funny or Die video spoofing the collaboration between Skrillex, Diplo, and Justin Bieber profiled by the New York Times. Honestly the original video hardly needs a parody, but the version with Thao & the Get Down Stay Down features her lovely single “Astonished Man.”

Read on to find out more about the lineup. If you didn’t win the pair of tickets we gave away, then you can still grab some while they last for $15.

THAO & THE GET DOWN STAY DOWN

Man Alive! is the followup to Thao & The Get Down Stay Down‘s acclaimed 2013 album We the Common, and is getting praise for being personal where Common was social and political. Nguyen uses Man Alive! to explore her relationship – or lack thereof – with her father, who left her family when she was a child. She has said that this is some of her most personal songwriting to date, and critics have loved this vulnerability that alternates between anger and forgiveness. The record was produced by Tune-Yards’ Merrill Garbus in Nguyen’s native San Francisco, and is more driven by beats and bass than her previous music. Even though she’s hitting her audience with heavy themes, she still really wants them to get down.

Last year, the folky outfit from Columbus, Ohio, Saintseneca, focused on a more rock and roll format for the songs on their third album Such Things. The group are known for their diverse instrumentation, including balalaika, mandolin, and dulcimer just to name a few. Songwriter Zac Little is influenced by everything from quantum physics to English rock. However, the group’s latest record is more straightforward alternative indie rock than folksy weirdness.