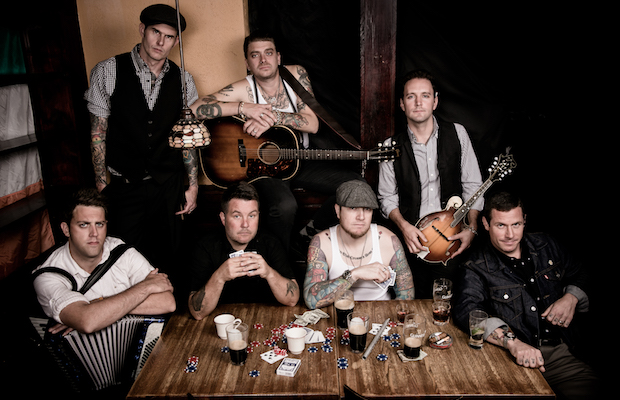 Like clockwork, you can always count on Boston-bred celtic punks the Dropkick Murphys to do something special for St. Patrick’s Day; typically a full-on tour, which has brought them to Music City at least twice in recent years, though not since 2013. This season, the Murphys are plotting an extra special run, celebrating not only St. Paddy’s, but their own 20th anniversary, for a tour that returns them to Marathon Music Works on March 2, along with Tiger Army and Darkbuster, both of whom also just turned 20. Tickets for this punk party of a tour package are still on sale here, but we’re also giving away a pair of tickets to one lucky reader! Entry below, and read on for full details!

It’s hard to believe, but it’s been 20 years since seminal celtic punk group the Dropkick Murphys first formed in the Boston-adjacent town of Quincy, Massachusetts. Two years later, in 1998, the band made an early splash with their beloved debut, Do or Die, the one and only LP to feature original vocalist Mike McColgan (who would depart shortly after, paving the way for Al Barr), and toured relentlessly, building a dedicated, underground following in their early years through a tenacious live show and an unorthodox mix of punk rock and traditional Irish music. The band began gaining buzz in the punk world in the early ’00s, before breaking through to broader mainstream recognition thanks to standout singles “Tessie” and “I’m Shipping Up to Boston,” the latter of which appeared on the group’s 2005 fifth album, The Warrior’s Code, which marks their most commercially successful effort to date. Over the last decade, the Murphys have released another three successful full-lengths, and have found more stability in their lineup, which was something of a revolving door in their early days. Especially loved in their hometown on Boston, the band’s music has been used in countless hometown team sporting events, films, and for social causes, and the group are frequently invited to perform at special outings. Champions for the working class, Dropkick Murphys have spent their career speaking out against injustice, fundraising for charities, and supporting unions. These days, they might be just as likely to appear on Warped Tour as to share the stage with Bruce Springsteen, but one thing that’s become increasingly dependable is their annual St. Patrick’s Day tour. Given the 20th anniversary celebration, and the fact that they haven’t released a new album since 2013, expect one career-spanning, retrospective celebration.

Signed to Dropkick Murphys’ original label home Hellcat for many concurrent years in the late ’90s though mid-’00s, California punk group Tiger Army are also celebrating their 20th anniversary. Like the Murphys, the trio have taken edgy, old school punk and fused it with something distinctly different, in this case rockabilly, helping popularize a sub-genere dubbed psychobilly. Also harboring an affinity for alternative, pop, and British post-punk, the band released four well-received full-lengths between ’99 and ’07, continuing to rise in prominence, before entering a state of dormancy over the past few years, during which frontman Nick 13 explored a solo run in the realm of folk and Americana. Last year, the band regrouped in the studio, and have pledged to release new music in the near future; we’d wager of a high probability of catching a preview on this tour.

Also from Boston and also celebrating 20 years since first forming, Darkbuster bear similarities to Dropkick Murphys’ old school pop punk influences, Oi! punk tendencies, and occasional brushes with hardcore. Marked by lighthearted, jokey songs in their earlier days, Darkbuster settled on a more mature sound in the early ’00s, and released a string of albums before becoming increasingly inactive towards the end of the decade, with various members adopting other projects or leaving the band outright. The band have intermittently reconvened to perform in recent years, and, after a decade of on and off recording since their last release, finally unveiled a new album, No Revolution, last year. This run is as much a reunion tour as it is an anniversary, so catch Darkbuster while you have the chance!

Winner will be announced Tuesday, March 1 10 a.m. CST, and will receive one pair of tickets. Good luck!