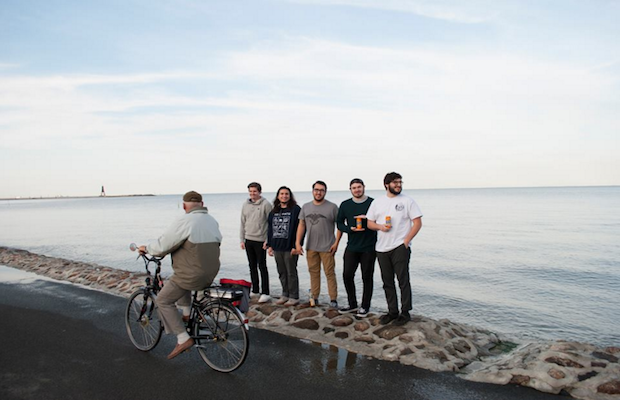 After announcing a tour and then keeping quiet for the holidays (the last month or so), Nashville beer-loving emo kings Free Throw are coming out of the gate at a full sprint. Heading out on a month-long stint across the U.S. with Young & Heartless, the tour kick-off show is tonight, Jan. 7 at The End, with Daisyhead and Sinai Vessel opening up. You can snag a ticket here, or, if you’re not the buying in advance type, at the door for $12.

This isn’t Free Throw’s first tour, or even their first one headlining. Still, every emo kid in Nashville knows that it’s another big step for the band,  who were opening tiny shows at defunct DIY space The Owl Farm just two years ago. Find out more about Free Throw and the rest of the lineup after the jump!

Free Throw have been honing in their sound since their first release in 2012. Drifting away from a more pop punk bent to something a little grittier, they’ve carried on the spirit of bands from the ’90s like American Football and Jets To Brazil, while at the same time giving the sound their own unique twist, complete with gang vocals, throat-scraping yelling, with mild-mannered guitar tones and self-depricating lyrics. Unlike many bands in the genre who just can’t help but be mildly sad, Free Throw will take you from crying during “Now Kith,” to pulling your hair out and screaming on “Tongue Tied” (featured below), to smiling and laughing on “An Hour Pissed.” They’ve found more success than many of their local peers already, and with increasing national buzz, it’s pretty clear why.

Young & Heartless sit in the same vein, coming from a shouting, distorted Jawbreaker-esque past then moving to something a little softer, a little (a whole shit-ton) sadder. Oh man is it sad. Most bands try a little too hard to be sad and it just doesn’t come through, while the Harrisburg, PA quartet make it seem like there’s nothing else to write about. Their most recent release, 2014’s The Pull of Gravity, is about just that. The things that weigh you down, ended relationships, depression, loss of loved ones. It is pure heartbreak, with well thought out melodies and a touch of strings that make it a perfect album to lie face down in bed and listen to with the lights off.

Last March, No Sleep Records signees and Nashville natives Daisyhead released a sensational debut full-length, The Smallest Light. While it has been completely slept on by the world at large, that doesn’t change the fact that they really know how to make beautiful alternative music. Intricate yet subtle guitars fill a massive space while hushed vocals keep you relaxed, yet at the edge of your seat at the same time. It’s hard to beat, but No Sleep Records just released a demo of their new song “Never Know,” and it may trump all works prior. Take a listen below and decide for yourself!

North Carolina’s Sinai Vessel play so many shows with Free Throw, they may as well be considered a Nashville band. Not like that’s a bad thing, in fact we could stand to see them around more often! Their spastic, dynamic brand of emo feels a little like Tiny Moving Parts, just with a little more melody (and lyrics that make sense). In gruff-voiced songs they discuss social altercations, sex culture, religious dominance, with a few sad stories thrown in the mix.