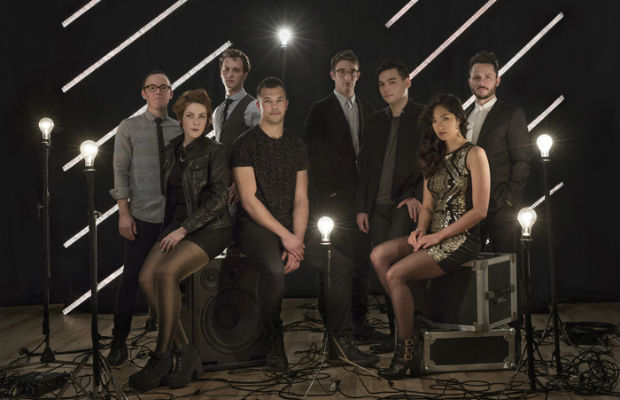 If you’re looking for something to do Saturday night, go check out Brooklyn’s own San Fermin. Making their return to the Exit/In stage, bandleader Ellis Ludwig-Leone and his band of 7 will be doling out tunes from their latest album, Jackrabbit, out earlier this year. Combining elements of classical music with modern, intelligent pop, the dual-vocalist group is not to be missed. Joining them for their December run is folk artist Sam Amidon, who will be kicking off the 18 and up show at 9 p.m. (doors at 8 p.m). Grab your tickets here now because with a price tag in the $9-$15 range, these babies are sure to go fast. Keep reading for more info, song samples and band bios!

Following a 5-week stint opening for Alt-J earlier this fall, the now 8-piece touring act continues their tour in support of their sophomore effort, Jackrabbit. Penned by founder, band head and composer Ellis Ludwig-Leone, San Fermin’s latest album takes classical elements from the band’s self-titled debut released back in 2013, while utilizing the extra members for a modern pop/rock edge. The beautifully blended, male and female vocal tradeoff (courtesy of Allen Tate and Charlene Kaye) is peppered with trumpet (John Brandon), saxophone (Stephen Chen), violin (Rebekah Durham), guitar (Tyler McDiarmid) and drums (Michael Hanf), to create their own brand of sophisticated pop. Perfectly showcasing Ludwig-Leone’s classical background with his excellent composition skills, combined with the pop/rock outfit’s musicianship and vocals, the album strikes an emotional cord leaving you feeling it all and wanting even more. Peep the video for the title track from Jackrabbit below.

Opening the show is the very enjoyable, very folky Sam Amidon. The Vermont native and banjo maven pulls components from old folk tunes for his sixth studio album Lily-O, released in 2014. The multi-instrumentalist—add guitar and fiddle to his repertoire—displays an Americana vibe with this 10-song effort he calls a “collage.” The album incorporates lyrics and musical elements from folk songs of past, with Amidon’s personal, instrumental touches for a unique combination of folk goodness. Check out the music video for “Blue Mountains” off the album below.