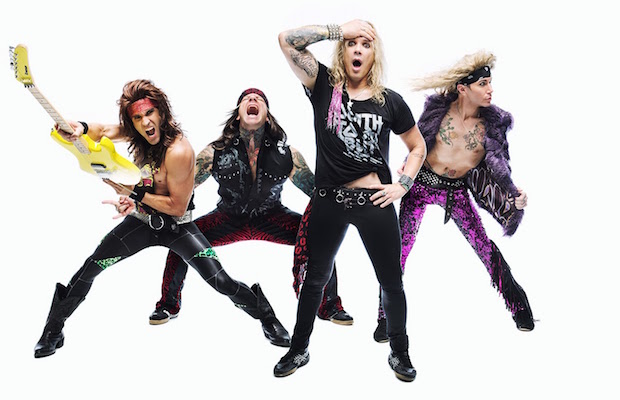 Almost exactly a year after their last local outing, LA’s Steel Panther, a satirical throwback to ’80s and glam metal, are set to roll back through Marathon Music Works tonight, Dec. 8 with locals The East Side Gamblers. If you’re an old school metalhead, or if you just like to laugh, you’ll definitely be entertained; tongue in cheek though they are, Steel Panther sincerely crank out some great tunes, and their raunchy, raucous persona is something you just don’t see much of these days. Head here for tickets, and read on for a preview!

Steel Panther‘s story is a long and unlikely one. Emerging from the LA scene, and formerly participating in actual, unronic metal groups, the band first rose to prominence as a part glam metal cover act, part joke/parody band with a residency at the Key Club under the moniker Metal Skool. As they increased their output into original material, Steel Panther began to amass viral buzz, and, by 2009, they had released an album under their new name, and began to tour with many of the acts who pioneered the sound they satirize. Adopting the look and sound and ’80s SoCal glam metal decadence, and lampooning the culture in the most loving and retrospective way, Steel Panther’s real defining quality comes from the ironic fact that they’re making better hair metal in the 2000s than any of the leftover ’80s acts could hope to muster in this day and age, and, despite their joke-band-edness, at their core, they seem to genuinely love and miss that era of music (as do their hardcore fans). Their live show is as fun as it is funny, so dust out your leopard striped pants and bandana, and get ready to rock.

Unlike Steel Panther, Nashville’s own The East Side Gamblers are a sincere, un-ironic rock act, who pull largely from alternative and call back to the best of retro hard rock and metal (think more ’70s and non-gimmicky ’80s). They’re a live powerhouse, and a great, albeit serious, choice to kick things off.

Steel Panther and The East Side Gamblers will perform tonight, Dec. 8 at Marathon Music Works. The show is 18+ begins at at 8 p.m. (doors at 7 p.m.), and tickets are available to purchase for $25.