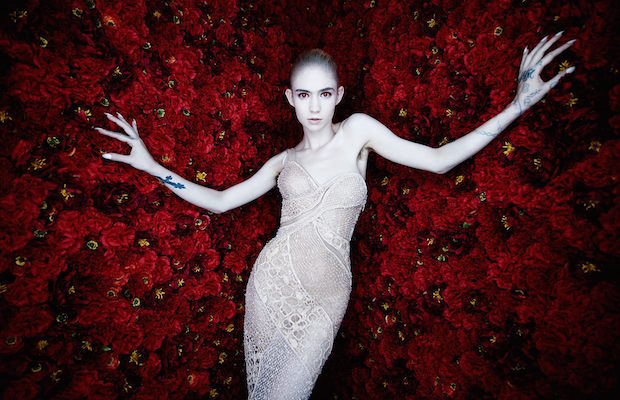 Celebrating the release of what is, without a doubt, one of the most amazing records of the year, Canadian experimental pop singer Grimes stops at Marathon Music Works TONIGHT, Nov. 10 with Nicole Dollanganger, for what is sure to be one of 2015’a best shows. It’s been over three years since we last saw the enchanting performer live, so tonight is beyond highly-anticipated, to say the least. You can still grab tickets here, and read on below for details!

It’s been nearly four years now since Canadian experimental/electro pop singer Grimes amassed global attention and critical praise for her breakout third full-length, Visions, one of our unequivocal favorite releases of 2012. It’s also been just over three years since the beloved singer played her last (and, so far, only) outing in Music City. Needless to say, we’re seriously craving our Grimes fix. After several years of teases and false starts, Grimes’ fourth album Art Angels was released last week, following a quick announcement and a couple of weeks of singles and video teases. As we already raved, it is not only Grimes’ best effort yet, but is also unequivocally one of the year’s best albums; a transcendent, sweeping, modern masterpiece that you absolutely must hear immediately.

Born Claire Boucher, Grimes is a producer, visual artist, and video director in addition to being an accomplished musician. From 2010 to 2012, she had a prolific early run, blowing up the blogosphere with her electronic laced, eclectic, DIY sound, combining elements of pop, r&b, electronica, hip hop, and experimental music, landing on a unique, refreshing, smart, and immersive sound. Straddling the line between indie and mainstream, Grimes has allowed her broader, more accessible influences to reign free in recent years, finding a culmination of eclectic sensibilities and a wider pop appeal with her unchained, layered, new LP. Grimes is one of the most gifted artists of our generation, and her dense, etherial, dreamy, dark, and immersive aesthetic and live show are unparalleled. Do not miss this unique and amazing singer live.