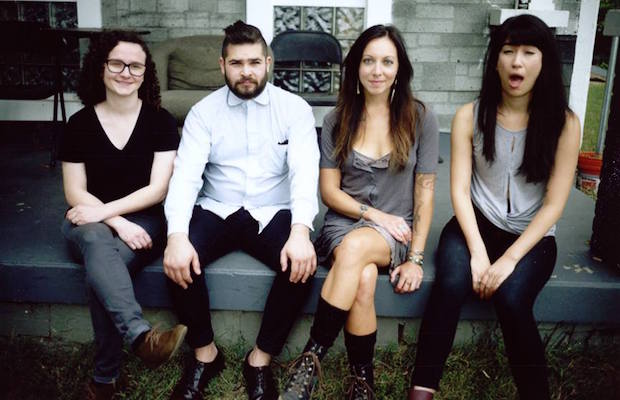 Awesome East Nashville garage band Churchyard are finally releasing their debut album on Saturday night, Nov. 7! They’ll be joined by lo-fi pop band Mom And Dad and riot grrrl trio Roman Polanski’s Baby. The whole shebang will go down at Drkmttr, a volunteer-run music and arts collective on the outskirts of the Wedgewood-Houston neighborhood. The all ages show is $5 at the door and starts at 9 p.m. Read on for more details about all the bands!

Members of awesome band Churchyard have graced bands such as Downtown Fever, Scandaliz Vandalistz, Joey and the Revolution, 13th Disciple, and Joey and the Pussycats. The four-piece comprised of Alice Buchanan, Meghan D’Amico, Rachel Warrick and Joey Dykes have now come together to form Churchyard, a band which is half garage rock and half dreamy ’60s pop. We must say, it’s a combination that really works, the music simultaneously dreamy and groovy, sultry and grungy. The group released a set of demos in 2013 and are excitedly releasing their debut full length studio album recorded by Harry Koniditsiotis at 5 and Dime Recording. Be sure to go to the show and get a copy of the new record before anyone else!

Despite the sheer amount of fuzz and noise that is released when Mom And Dad play, the band still defiantly self-describe as pop music. One need not do anything but listen to the track conveniently embedded above to catch their drift. It’s a sound that may question our definitions and ideas of what pop music is and means, but it is a sound that is undeniably catchy, anthemic and danceable. It is also fuzzy and lo-fi and much more alive than most pop music of the day.

Featuring Churchyard’s own Rachel Warrick, Roman Polanski’s Baby, equal parts punk and riot grrl, will bring the cathartic mania that this show (and every show) needs. Screaming the things that most people won’t even say, they self describe as “pussy rock” and are awesome.

Churchyard, Mom And Dad, and Roman Polanski’s Baby will perform Saturday, Nov. 7 at Drkmttr. The show is 18+, begins at 9 p.m., and tickets are available for $5.