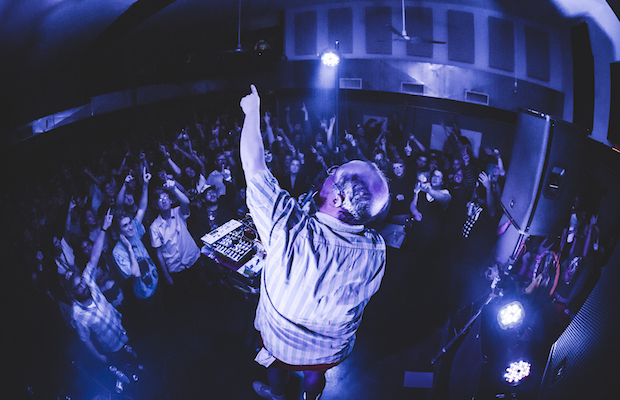 When you go to enough shows, they start becoming routine. Maybe you show up a bit after doors open and grab a beer. Then the opener comes on and you half pay attention while chatting with your friends. Finally the headliner plays, you party hard (or, you know, sit calmly and enjoy depending on the show) for an hour and a half then you head home. It’s not a bad routine, but it can sometimes feel stale. That’s why it’s good to shock the system every once in  awhile, and no local show has done that better recently than Star Party’s “Witching Hour Halloween Trip-Out”, which went down at The East Room last Friday, Oct. 23. Dan Deacon headlined the mini-festival, with opening sets from Pineapple Explode and Hypochondriak & Madwarrior, but that’s just scratching the surface of the night that was. Read on after the jump to find out more about one of the strangest shows of the year!

We knew this show would be something else entirely from the minute we walked in the door. Before we could even have our tickets scanned at the counter, we were already being offered “special” cookies. We made our way in to see “Rocky Horror Picture Show” on the screens playing backwards on mute, while a healing session was happening on the floor of the venue. After participating with the group for a few minutes, we made our way to the back yard, which was the hub of all the extracurricular activities for the night.  Half of the outdoor area was filled with picnic tables that were covered in sketch books, paint and other art supplies so everyone had a chance to be creative. The other half looked like a miniature version of Bonnaroo’s infamous “shakedown street,” with vendors galore selling glass pipes, cacti, healing crystals, veggie burgers, and more, plus a reiki healing area where the teacher of the indoor healing session was working with people one on one. This area was presided over by a DJ rig, with a hippie-Jesus looking conspiracy theorist DJ sporadically manning the deck, alternating between playing techno music and spouting off rants about government mind control chips, government-created cancer, and any other conspiracy you can think of. If you’ve ever wanted to step into a Portlandia sketch without having to travel to Portland, this is probably the closest Nashville has come in a long time. 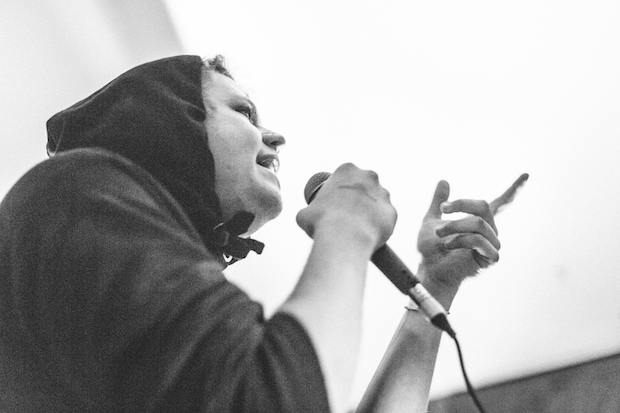 Once we made it back inside, the first opener had hit the stage – Hypochondriak & Madwarrior. Something of a BZRK side project – the hip-hop duo were solid, with killer beats and some clever wordplay on the mic, but the crowd was still small inside the venue due to everything happening outside. After their short set, spoken word artist Edwin R. Perry took the stage and read a few impassioned poems. We went back outside to find a band called Oli Endless & the Possibilities playing on top of an air conditioning unit, with just a guitarist and a drummer with only one drum. At first they had no amplification, so the singer would try to sing loud enough for people to hear, but then kept stopping to yell at people for talking too loud. Whether or not it was in jest wasn’t clear, but either way it wasn’t really gelling with the vibe of the rest of the night. They later got a mic and the singer calmed down, but by that point we were heading inside to catch the next opener, Pineapple Explode. 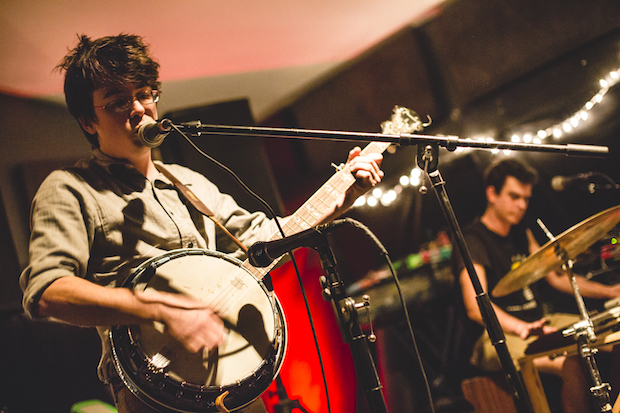 We got back in the main venue to find the healing crystals seller holding a show and tell session by passing the crystals around so everyone could get a feel of their powers. Once he was finished, Pineapple Explode hit the stage and started a set that was unlike any I’d seen, and stood out even amongst all the craziness of the night. Utilizing a wide variety of resources, they made music that was both intimate and complex. They played everything from guitar and banjos to toy xylophones, bells, whistles, tape machines and more. Landing somewhere between the Books and Holy Fuck as far as “found object” music goes, with vocals close to the lead singer of Beirut, they didn’t stick to one style – seamlessly moving from moody acoustic to upbeat, sample-based tracks. About halfway through their set, the crystal man came on stage to make an announcement pleading with the crowd to give his fluorite back to him – the “show” part of show and tell apparently didn’t go too well. As soon as Pineapple Explode finished, the venue started to fill in anticipation of the night’s main event. 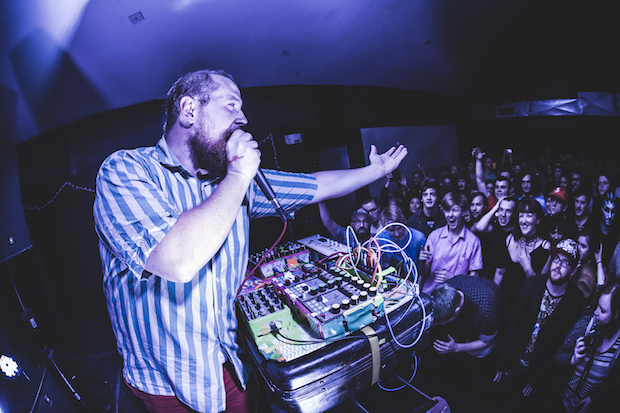 After an introduction from the night’s de facto host, Dan Deacon finally hit the stage around 11:45. He started his set with a few jokes and a “Hakkunah Matata Nashville!,” joking that he wanted to name his last album that so that Disney would sue over using a phrase that means “no worries.” He also claimed that while he’s played plenty of unique shows, this one takes the cake. He then led the crowd in an exercise to release their anxiety so we could all enjoy the show to the fullest. Then without warning he kicked the party off by opening with “The Crystal Cat” – washing the crowd over with a wave of constant, colorful lights, and we ate it up. It wasn’t long before the usual Dan Deacon shenanigans began, as he had the crowd open up a dance circle right in the middle. He had two people go head to head as he played, and laid down the rules that if they tagged you in, you couldn’t say no. The system worked for a while until it just became one big dance party across the whole floor, which was a running theme for the night.

His next stunt was to create a human tunnel that stretched from inside the venue, out the side door to the back porch and then back around to the main entrance of the venue. The idea worked for a while, but the line was long and I never had a chance to find out if it did reach around the whole venue because it didn’t take long for it to once again just become one big dance party. While the venue was less crowded during the tunnel experiment, some extremely passionate Dan Deacon fans made their way to the front and looked as if they were having the time of their lives, crying and screaming along with the songs at the top of their lungs. It was a delightful reminder of the power of music – even the spastic, high pitched electronica of Dan Deacon can mean the world to someone.

The last thing he had the audience do was split right down the middle and kneel, giving each side a leader to initiate dance moves that their respective sides would mirror as best they could. He played “When I Was Done Dying” while the two sides dance battled, eventually becoming one again to dance even more. These group activities led to a heightened sense of community amongst the crowd. When Dan said during a song that he was thirsty and hoped someone would bring him water, it didn’t take long for someone to hop on stage to hand him a bottle, then trust fall onto the front rows and crowd surf away. Before his final song, Dan made an impassioned speech against the police violence that has plagued his hometown of Baltimore and many other places in America by invoking the faces of people you love and comparing their face to the faces of the people who have lost their lives unjustly in recent months. It was eloquent and heartfelt, and beautifully set the stage for his uplifting final song – “Feel the Lightning”. It was the perfect ending to a night full of dancing, energy, art, healing and everything else you can imagine.