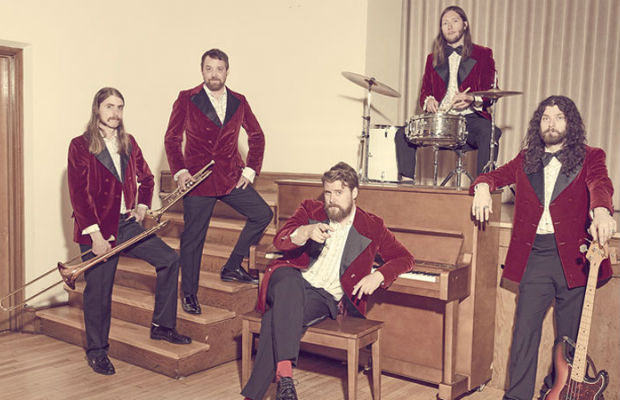 The bearded band of brothers that are The Sheepdogs will be making a stop in Nashville this Sunday night, Oct. 25, to play a show at 3rd & Lindsley. The Canadian rockers are on their fall tour following the release of their new album, Future Nostalgia, out earlier this month. This latest effort is the followup to the band’s 2012 self-titled release, produced by The Black Keys’ Patrick Carney. Luckily for fans, that guitar heavy, southern rock influence is here to stay. Opening the show is acid rockers Radio Moscow, so be sure to get there early in order to get the full experience. Keep the magical era of traditional rock and roll alive by checking out this killer show Sunday night. $15 puts you front and center, so grab your tickets here! Keep reading to learn more about this rock dream bill.

The Canadian, born-to-be Southern rockers are back in full swing, releasing their first album in three years. Their gig at 3rd & Lindsley will be the band’s first show in Nashville since 2012, and this time the boys are bigger and badder. Their lineup is headed up by singer/guitarist Ewan Currie, and is completed with bassist Ryan Gullen, drummer Sam Corbett and newest members guitarist Rusty Matyas and keyboardist Shamus Currie, who also happens to be Ewan’s brother. The rock n’ roll five piece have toured with rock royalty ranging everyone from Kings of Leon to John Fogerty. The guys made the cover of Rolling Stone back in 2011 as the first unsigned band to grace the front of the iconic magazine. After a stint playing music festivals like Bonnaroo, the band went back to work to put out their latest album, Future Nostalgia, released by Warner Music. The release serves as a much-anticipated follow up to their 2012 self-titled release, produced by Patrick Carney of The Black Keys. Fans of The Sheepdogs’ classic 60s vibe and unmistakably groovy rock riffs will be super into their latest release. Listen to the single, “Downtown,” off their new album below.

Psychedelic rock band Radio Moscow will be kicking off the show this Sunday night. The three-piece, ’70s inspired rock act, hailing from Iowa, are fronted by mastermind Parker Griggs. The founder and lead singer/guitarist is the sole original band member remaining. The trio are rounded out by Paul Marrone on drums and Anthony Meier on bass. The guys are currently touring with The Sheepdogs following the release of their fourth studio album, Magical Dirt, out last year. Like their tour mates, Radio Moscow also got a little help from fellow blues rockers The Black Keys, only this time it was frontman Dan Auerbach producing their self-titled debut back in 2007.  Come to the show to see first hand why one the biggest modern rock acts is a fan of this bill.  In the meantime, check out the video for the band’s single, “Death Of A Queen,” off their last album below.