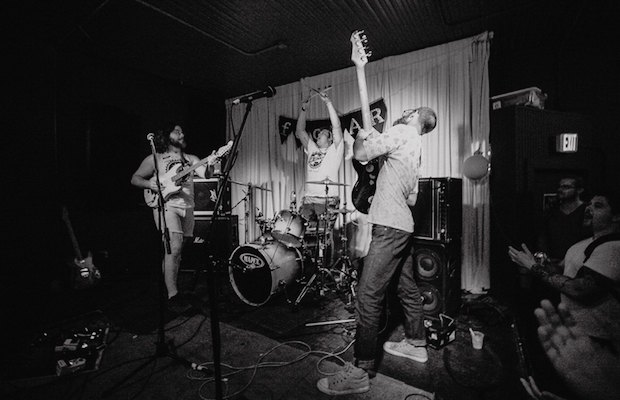 If you’re looking for a little mid-week excitement to spice up your normal routine, head to Queen Ave Art Collective tonight, Oct. 21. The lineup begins with locals Danny Melonz and includes Majesty, Iji and Murfreesboro’s Awesome Shirt. This show is jam-packed with DIY goodness and a good mixture of locals, touring veterans, and those fresh to the scene. Read below to learn more about the artists and to preview their music.

Awesome Shirt are local Murfreesboro rockers. If you listen to It’s Your Funeral, you’ll be able to tell they keep things extra loud. They’re part of Owlhead Collective alongside other DIY artists such as Meth Dad. The group gives rowdy performances while being on the strange and interesting side of things. Check out a track from their album below, and download it for free on Bandcamp.

Iji are something special. The Seattle five-piece have been releasing albums and touring for years. Their latest album, Whatever Will Happen, is a culmination of their career so far. It centers on themes about traveling through the country- the excitement as well as discontent. Iji’s sound is non-replicable and honestly, rare these days. On the surface it is fresh new wave, but with just one listen you can find hints of jazz, pop, and punk. This band is the definition of DIY. Watch their new video for Cruisin’ USA below, check out their album, and see them in person tonight!

Local pop punk trio Majesty recently released a debut, self-titled demo EP. With a charmingly lo-fi sound, the group straddle the line between classic emo and the more indie side of modern pop punk. We don’t know much else about them, but we’re eager to see how their earnest sound translates live.

Danny Melonz are an electronic act consisting of two Nashville locals. The group create new wave and ambient electronica, also sampling jazz, hip hop, and everything in between. They test the limits on sound and the confines of the genre, pushing to something really unique. Check out a track below, and hear their tunes live tonight.

Awesome Shirt, Iji, Majesty and Danny Melonz will perform tonight, Oct. 21 at the Queen Ave Art Collective. The begins at 9:30 p.m. (doors at 8 p.m.), and tickets are available for $5.