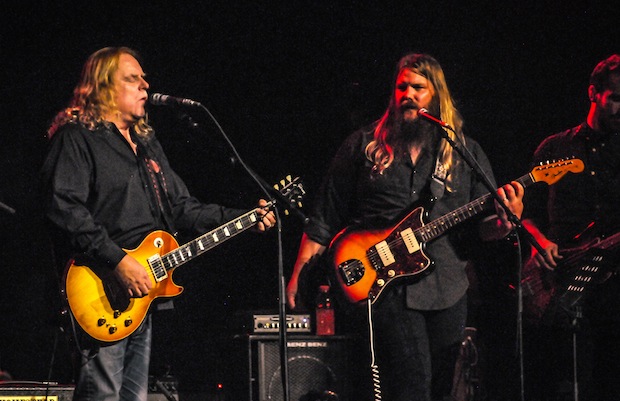 Last week was one hell of a good one for live music in Nashville. As the summer weather is finally dying down and fall is starting up, the concert schedule is remaining just as hot as it always is. The beginning of the week brought a very exciting bill to The Ryman, as former Allman Brothers guitarist and Gov’t Mule leader Warren Haynes brought his Ashes and Dust tour to town. Hundreds of blues and jam band fans packed into the Mother Church with their bandanas and tie-dyed t-shirts to watch the Asheville native serve up a healthy portion of Allman Brothers classics, covers, and songs from his new record. Haynes was joined by local Nashvillians Chessboxer and former Old Crow Medicine Show member Gill Landry.

Keep reading after the jump for our full review from this smoking show. We also have a collection of photos from the night taken by Brad Hochstetler.

First up were Chessboxer.  The group are an acoustic three piece that is the brainchild of Matt Menefee and Ross Holmes. With the addition of Royal Masat, the band have managed to hone in on a groundbreaking bluegrass style. They give the  age-old genre a modern feel with their inclusion of intricate compositions, delicate improvisation, and light textures that resemble the likes of Bela Fleck and Jazz Mandolin Project. Their set also displayed their versatility in song choice, ranging from everything from original material to an alt-j cover, providing a wonderful opening to the night. The early crowd roared with loud applause at their extended instrumental sections and their voices, which were perfect in complementing the group’s talented instrumentation. Chessboxer finished their set, but weren’t done for the night. More on this later.

Next it was time for Gill Landry. As mentioned before, Landry is a former member of Nashville heroes Old Crow Medicine Show; however, he has gone on to successful solo career. Landry just released his self-titled third album earlier this year. Recorded in South Nashville, the LP is another testament to Landry’s personal and intelligent songwriting.

Gill’s set was most certainly an example of his effective songwriting. His voice sounded very full and traveled seamlessly through the auditorium. Everyone in the crowd listened with great interest and willingness to hear Landry’s story. He played old material and plenty of new songs as well such as “Just Like You,” and his solid band knew how to hold back when appropriate. This was seen in such methods as the drummer putting blankets over his drums in order to control the sound in such an open room. The set was an overall calming and valuable way to warm the audience up for what was to come next. 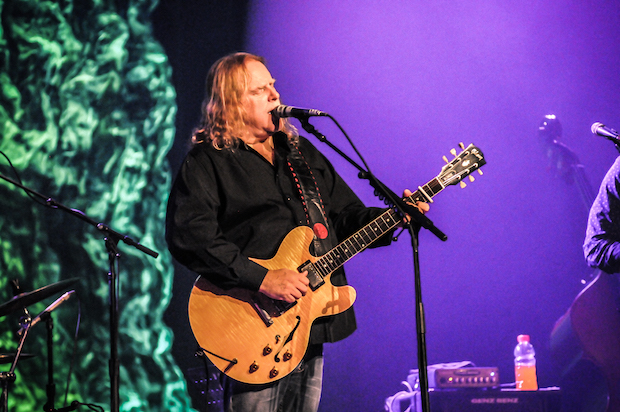 It was then time for the headliner of the night. In our preview for the show, we reported that Railroad Earth would serve as the backing band, but it turns out that they weren’t able to join Warren for this show. Warren Haynes walked on stage with his backing band for the night which was none other than the openers Chessboxer. Haynes acknowledged this change in lineup by saying to the crowd “You’re probably wondering what’s going on here. Well, welcome.” Behind the group was a lush purple backdrop of a pattern that made it look like the band were playing in the Rocky Mountains, which gave an organic and special feel to the set from the very beginning. Warren Haynes and his band offered up a set of originals and covers. The most impressive choice was a rocking version of Radiohead’s “Karma Police>Paranoid Android>Karma Police” medley that had the entire crowd going nuts.

It was quite impressive to see how Chessboxer and the rest of Haynes’ backup band had been able to adapt to his style. The composed parts of songs were very exciting and the improvisational jams were even more thrilling. Haynes brought out a number of special guests throughout the night as well. Banjo master Bela Fleck came out for “Tough Mama,” “All Along the Watchtower,” and “Troubled Mind Jam.” Towards the end of the show, Nashville local and one-time Allman Brothers guitarist Jack Pearson came out for the classic “Blue Sky.” Pearson and Haynes did an outstanding job with the classic duel guitar solo that closes this song out. After a full two plus hour show, Haynes and the band left the stage but only to be immediately called back for an encore. They went with the Tom Waits song “Get Behind The Mule” from the album Mule Variations. This was an obvious homage to the 20+ year history of Haynes’ band Gov’t Mule, and, while it wasn’t the most energetic of show closers, it sent the crowd off pleased at such a spectacular night of musicianship.
—