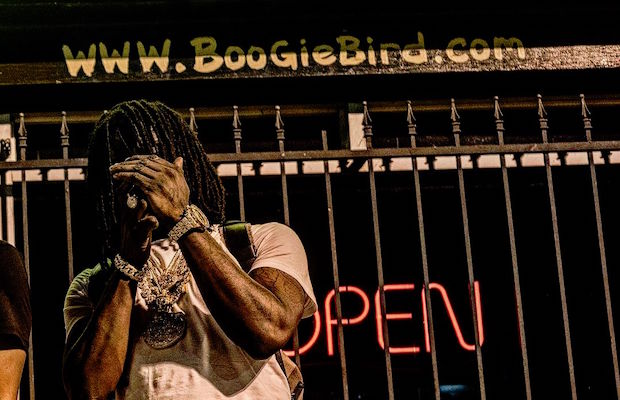 This fall, plenty of artists have made their first appearance in Nashville. Joining them on the list now is Chicago rapper Chief Keef and his right hand man Fredo Santana, coming from the Windy City all the way to Limelight, with Chicago up-and-comer Shorty K opening up. Whatever this show might entail, one can only imagine the amount of debauchery that will take place. Tickets are $25 here or at the door, and the belligerence starts at 11 pm with doors at 10. This is going to be nuts. Find out why after the jump!

Chief Keef. Almighty So. Chief Sosa. Monikered menace, Glory Boyz Entertainment leader, and Chicago rapper. After making a name for himself with his 2012 Interscope Records debut Finally Rich, Chief Keef reached surprising commercial success with his blend of low-key, vicious hip-hop and auto-tuned club bangers. His most recent release, Bang 3, Pt. 2, demonstrates his refusal to change, or (like his song with Andy Milonakis) get too serious. His sets are known to get wild, and we might just see a few more GBE members make an appearance on stage with him.

Fredo Santana is Chief Keef’s right hand man. He’s been with him through his ride to the top, now Fredo is cashing out and generating a fan base of his own. He just released his first album, volume 1 of Ain’t No Money Like Trap Money on Savage Squad records, and it features some big names (Ty Dolla Sign, Gucci Mane), and some of his fellow GBE members, including a song with Chief Keef. What it may lack in originality it makes up for with pure MEAN. Chief Keef said “Fredo in the cut, that’s a scary sight,” and man, if he plays “How You Want It,” Limelight will be a scary sight.

I haven’t heard much about Shorty K, but it’s clear that some people have. Born Leader Entertainment rapper on the rise, Chicago’s Shorty K is under the wing of Chief Keef, and you can definitely hear the Chicago rap in his mean, dirty instrumentals, but what sets him apart is his vocal approach, louder and more aggressive with some West Coast influence. Definitely worth showing up “early” for.