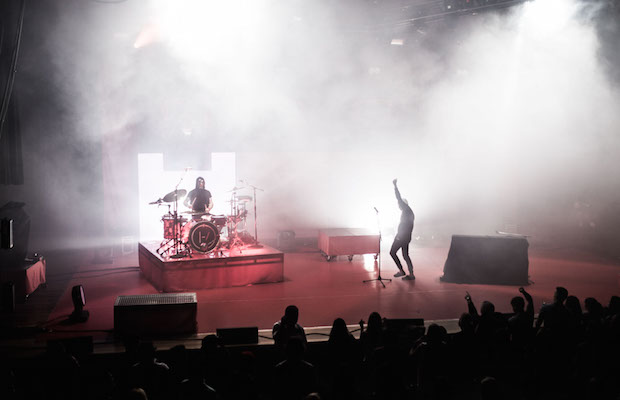 Last Monday, undefinable musical sensations twenty one pilots played to a sold out Ryman Auditorium with breakout indie rockers Echosmith and the Bay Area’s Finish Ticket. After hitting Nashville at Marathon Music Works just over a year ago, excitement for the returning creators of one of this year’s hottest albums was at an all-time high. And let me tell you, they did not dissapoint.

For shows, sometimes you just have to be there. But if you weren’t, reading about it is the next best thing. Check out our full review and and some amazing photos from Nolan Knight below!

After, admittedly, getting through doors five minutes late, Finish Ticket had already kicked off their set, and were recieved better than almost any opening act I’ve seen. Everyone in attendance was excited, and the six members that make up Finish Ticket fed off the energy. Even though they delivered some pretty low-key tunes, they felt fresh and rejuvinating. They sounded like an American version of The 1975, but hey, I like The 1975. The key point here being that they perform like more than an opening band. Yes, even the keyboard player hanging out and playing air guitar. 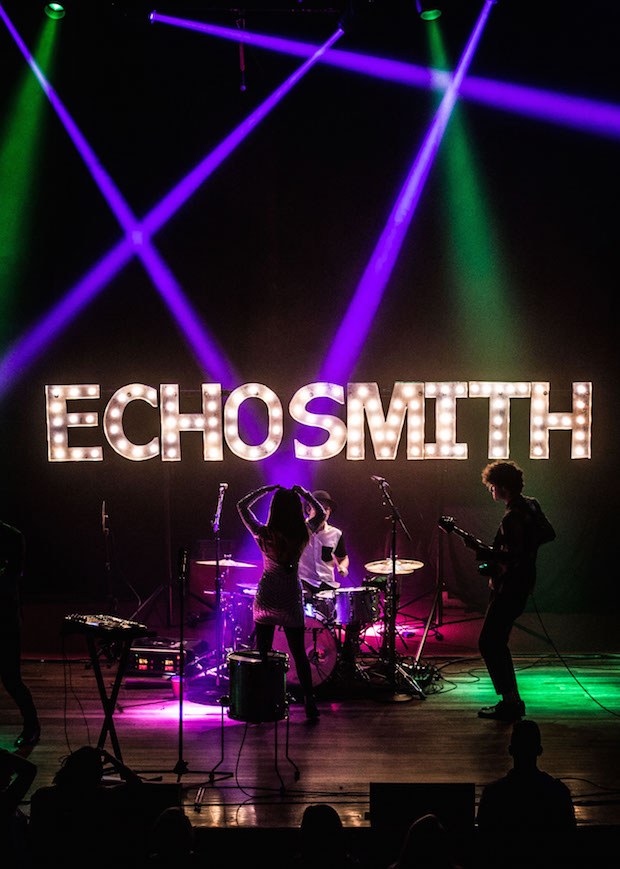 Then Echosmith came on. Yeah, you know them. The “Cool Kids” band. I’m clearly in the minority here (obviously, it achieved massive success and radio play), but I just couldn’t get into it. Then, I heard the rest of their debut album, Talking Dreams, and it was great! Songs like “Bright” and “Tell Her You Love Her” were exquisite, and live they were truly highlights. It’s easy to draw the conclusion that some of the people in attendance had purchased a ticket just for Echosmith, and there was a lot of love and a lot of energy directed at them on the stage. However Echosmith, despite a solid effort, just couldn’t match it. Maybe it is just because they are still such a new band, they need to grow into their position a little. Speeches between songs felt a little awkward, even funny at times, like when they took a picture on stage with an iPhone. And they sort of just stood and played.

This, they actually did very well. Echosmith can afford to be less energetic in the presentation because they really nail the content. Not a note out of key, not a hiccup, and no dull moments. Maybe it was just the venue, but their more country side came out on slower tracks like “Bright,” especially on the spontaneous three-part harmony at the end that everyone (myself included) went nuts over. They came back with high energy for a Modern English cover and closed with “Cool Kids,” and, overall, I think they really nailed their whole set despite a few things that didn’t sit well with me, a glorified nit-picker. When Echosmith left the stage, there was just as much tangible excitement as when they came on, maybe even more. 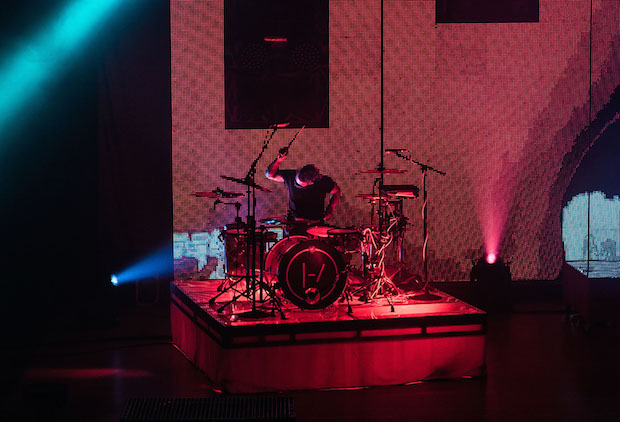 twenty one pilots. Independent, genre-crossover conglomerate duo from Columbus, Ohio. Cemented into the mainstream by their most recent album Blurryface, twenty one pilots are in a state of rapid growth right now and, despite what anyone might say, are doing something completely new, something impossible to pin down. It’s a bipolar disorder, a confusing case of whiplash. But they pull it off. From rapping in a verse on “Stressed Out” to sing-alongs over ukulele in a chorus on “The Judge,” they are unpredictable and exciting, two things that pop music never are. They’re just getting started, and that’s what was so exciting about this night.

Packed to the brim with screaming fans, The Ryman Auditorium was in a state as such I’d never seen as they opened with Blurryface opener “Heavy Dirty Soul,” decked in skeleton outfits. It was like the conservative old man that is The Ryman Auditorium was replaced with his 16 year old grandchild, heart pounding from the thrill of sneaking out for the first time. I’ve seen my share of two-piece acts, but none ever filled the room like Twenty One Pilots did, not only in sound but in performance. It could only be described as unique. From the live drum ‘n’ bass duo to the medley to the dancers in hazmat suits, the tone of the stage shifted from thrilling to warm to dark and back again. Frontman Tyler Joseph commanded the stage and hypnotized the crowd with his massive amount of charisma. Yet, despite leaping onto and off of props, sprinting side to side, he still sounded phenomenal.

It needed to be, too, because holy shit did they play a lot of songs! They played almost every track off Blurryface, as well as a five+ minute medley of eight songs from their other releases and an Elvis cover. A brief cover of “Lean With It, Rock With It” managed to work its way into their set, too. I saw their setlist ahead of time and the number of songs made me nervous; that makes for a pretty long set. But each song was met with more enthusiasm than the last, and I found myself upset when the set was finally over. Luckily enough, they graced the Ryman with a two-song encore of “Goner” and “Trees,” but they could have easily picked any song to close with. 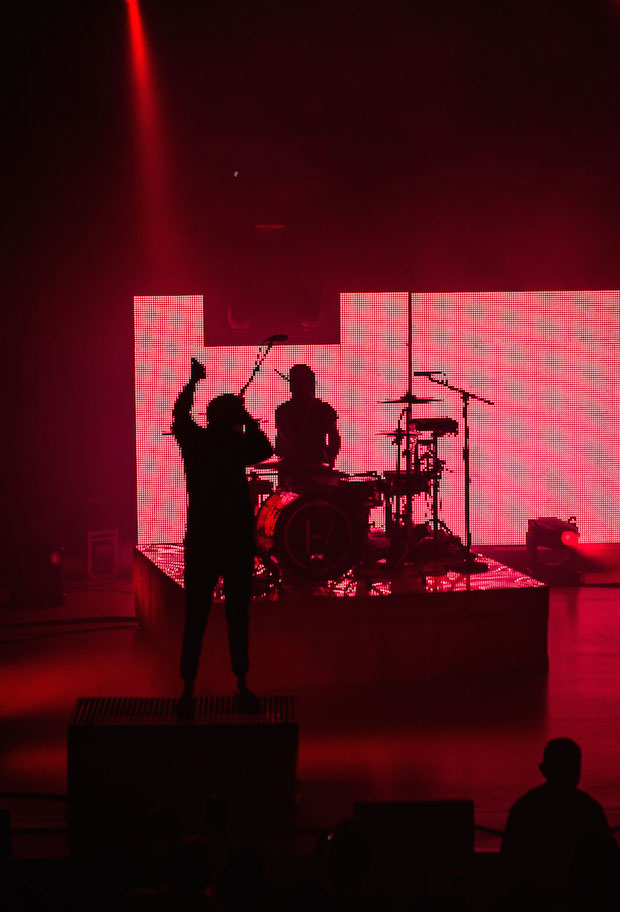 I could B.S. on and on about the aesthetics or the lighting or the way the band presents themselves, but what it really comes down to, what really makes the band? It’s the fans. Someone that scoffs at a lot of trends, someone like me, could easily hear a twenty one pilots song and scoff. But this is a band that have captivated a massive audience that connects deeply to the songs they play. A resonance like that is powerful, and it may seem dramatic, but hearing 2,361 people scream the chorus of “We Don’t Believe What’s On TV” is intoxicating, goose-bump-inducing. The likes of which I haven’t seen since Fall Out Boy came to power. twenty one pilots blew up this summer, but they are already on their way to bigger and better things.