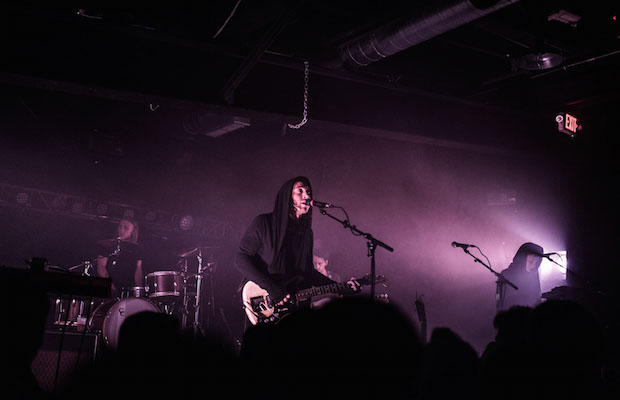 Seattle singer-songwriter Noah Gundersen took an artistic leap with his latest album, Carry the Ghost. The folkier feeling of his debut release was stripped down to a grittier sound that helped relay the feelings of uncertainty that had been weaved into each lyric. When he took the stage at Cannery Ballroom, concertgoers were introduced to this new era of hard-edged artistic experimentation. Those in attendance enjoyed a mix of old and new favorites during a set that consistently kept the crowd wondering what would happen next.

If you didn’t make it out on Friday, don’t worry. We have our full review, along with photos from Nolan Knight, right after the jump.

It seemed like all of Nashville was packed into Cannery Ballroom on Friday night. Usually, these types of shows are filled with concertgoers ready to drink and party before they head out to the bars. Instead of rowdy screams and loud talkers, the Ballroom was filled with a silent and attentive crowd that could have been plucked from the Bluebird.

When Christopher Porterfield of Field Report took the stage, he was noticeably impressed by the crowd’s engagement. Between songs, he referenced an article he read about an unruly crowd at a recent Angel Olsen show. “Silence is a currency exchanged between the crowd and the performer,” he noted. “Thank you for listening.” His short but sweet set only featured his vocals and an acoustic guitar, but that was all he needed. The acoustic performance was the perfect setting for Porterfield’s voice, which soared during the heartfelt tracks “Michelle” and “I Am Not Waiting Anymore.” 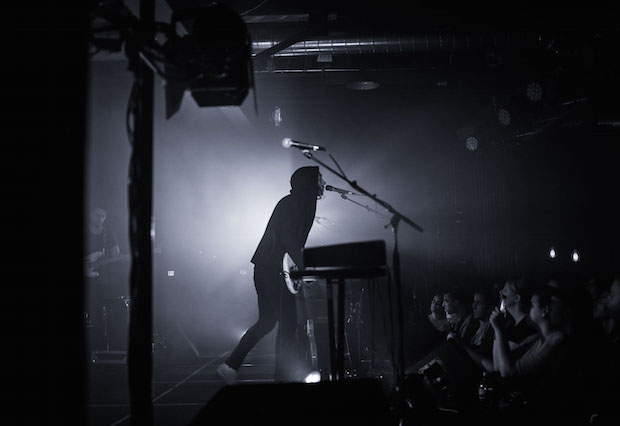 As he took the stage, Noah Gundersen was shrouded by a black hood that kept the audience from getting a clear view of his face. He stood in front of a grey, fog-filled backdrop that created an aura of mystery, which molded the vibe of the entire performance. Gundersen’s latest album, Carry the Ghost, follows a darker and much grittier musical highway than his previous, more Americana-friendly releases. For those older fans who love the folkier sound of his breakthrough debut album Ledges, the performance probably seemed a little hard to take at times.

The sound was purely grunge-rock during the breakdown in “Halo (Disappear/Reappear),” which showed off Gundersen’s true star power. Midway through his set, a pounding base line accompanied with a sparse electronic beat filled the room. This was the intro to one of his most beloved tracks, “Ledges,” but the song was almost unrecognizable. As I scanned the crowd around me, there was a mixture of open mouths, furrowed brows and entranced grins.

Although I applaud Gundersen for trying to tweak the track in order to make the set sound more cohesive, this version just didn’t work for me. I wasn’t the only one who felt disappointed, as the once cheering crowd only allowed a smattering of applause once the song ended. In the awkward silence, a couple next to me shook their heads at each other disapprovingly. “That was just bad,” the man said. While I didn’t disagree, there’s a lot to be said for Gundersen’s choice to change things up and take a risk. 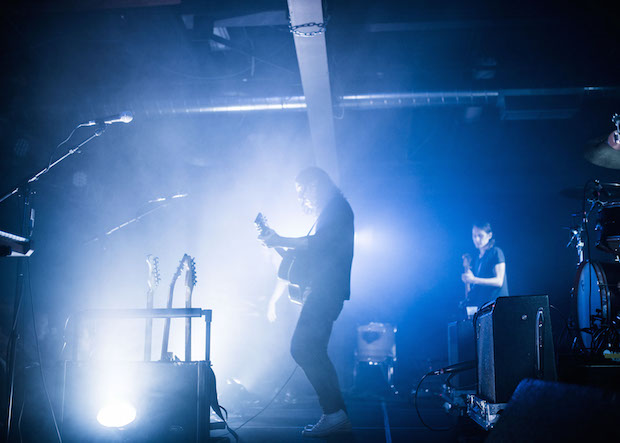 “Ledges” was the only semi-sour note hit in a set full of incredible moments. After reeling through a good chunk of his latest album, he revisited some older favorites, much to the crowd’s excitement. After singing the tear-inducing cut “First Defeat,” Gundersen let out a chuckle and asked the crowd, “Does anyone know Taylor Swift? I’m trying to sell her that track.”

Other high points in the night included his show-stopping cover of the Deftones’ “Change,” a special dusting-off of his fitting but somber song “Nashville,” and a simple yet haunting rendition of “Topless Dancer.” Those who stayed for the encore enjoyed a special appearance by Butch Walker, who came in for the second verse of “Cigarettes.” After just a few lines of the song, I heard the whimpers of a girl standing behind me who had burst into full-blown tears. That’s the kind of power that Noah Gundersen lends during a live performance. His ability to make you feel, even if it’s a feeling you don’t like, is unquestionable.

Noah Gundersen is in that strange, uncharted territory that comes after releasing an album that is far evolved from his previous works. Both albums feature incredibly strong tracks that translate well live, thanks to Gundersen’s incredible voice and artistry beyond his years. Although he may not have quite figured out how to bridge these two works into one cohesive show, he’s damn close.