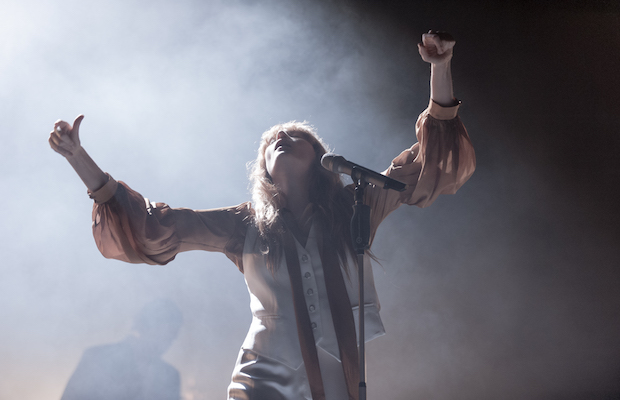 Even though Florence + The Machine just played Bonnaroo over the summer, it still felt like it had been forever since they played Nashville proper – the last time they were here, in 2011, they were opening for U2 at Vanderbilt’s stadium. This year they kicked off their US headlining tour in support of their latest release, How Big, How Blue, How Beautiful, with a sold out show at our newest concert venue, Ascend Amphitheater. The anticipation for HBHBHB‘s release was pent up for nearly 4 years following 2011’s Ceremonials, so needless to say, fans were pumped and ready for this show, and Florence & co. certainly lived up to the expectations. Read on for our full review of the magical night here along with some photos from Johnny Giles.

While I’ve been a diehard Flo fan since I first heard the eclectic pop sound of their debut album Lungs in 2009, I can’t say that I’m the biggest champion of outdoor concerts, mostly because I fear the unknown. By that I mean I fear the possibility that the show could get rained out, which started to look like what was going to happen when a downpour came out of fucking nowhere that afternoon. But as big of a baby as I am about weather, I was going to stick it out for Florence no matter what, so I put on a hat and shoved an umbrella in my purse and went on my way. Plus, I hadn’t been to Ascend before this point, so I was ready to check it out and see what the fuss was about.

I found out en route to the show that the scheduled opener, a folk/hip-hop oriented youngster from Atlanta by the name of Raury, was no longer appearing due to “unforeseen events.” Rumor has it that he got a last minute opportunity to play one of the late night shows, so I can’t say I blame him for peacing out. As a result of the last minute lineup drop, I hung out with some friends and drank a $16 beer to kill the hour until Florence’s grand arrival. 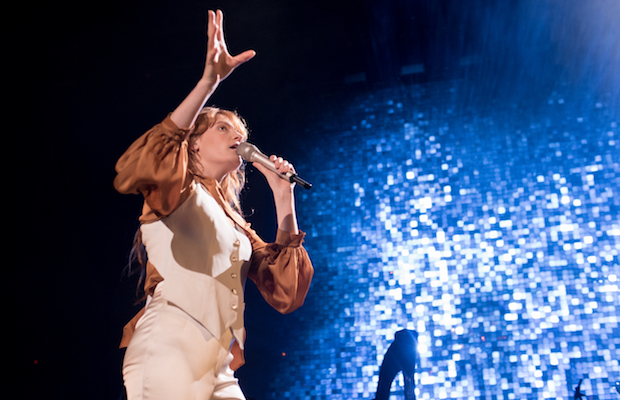 I made my way over to my seat about 15 minutes before showtime and holy shit, y’all, my seat was good. I’m talking 7 or 8 rows back in the very front center. I’d just assumed that I would be watching the entire thing from the jumbo screens, but nope. I had a perfect view.

After a few minutes of waiting on the edge of my seat, the lights started to go down and the glittery silver backdrop lit up. The crowd cheered as the band members entered the stage: Isabella Summers (keyboard), Robert Ackroyd (guitar), Chris Hayden (drums), Tom Monger (harp), Mark Saunders (bass), and Rusty Bradshaw (keys) all walked out first and began the intro to “What The Water Gave Me.” After a few measures, Florence emerged in all her vintage glory, wearing a white silk pantsuit and a golden red blouse that matched her hair almost exactly. 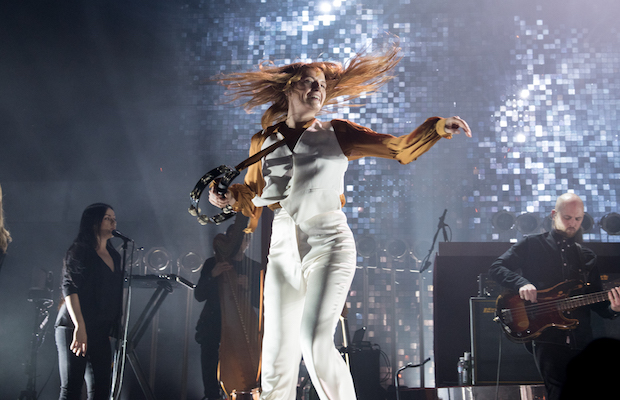 After an extended, dramatic play of “What The Water Gave Me,” they jumped straight into one of the newer singles, “Ship To Wreck.” As you can probably tell from the pictures, there was hardly a moment where Florence was standing still – and even if she was standing at the mic, she was still participating in some kind of elaborate hand gestures. Between all of the jumping and zipping back and forth across the stage, and even some real ballet moves, I was amazed that her voice still sounded as strong as it did. Seriously, she never skipped a beat. There was energy oozing from every inch of that stage, and you could feel it floating out into the crowd.

Before introducing the next song, she told us how much she loves choirs and how badly she wanted to bring one out with them on tour, but that it just wasn’t possible, so she asked us to help pick up the slack. With a singing voice as powerful as hers, it was surprising to hear her speak in such a soft, demure tone; it was almost like she transformed into an entirely different person when she performed. As she started singing the opening verse to “Shake It Out,” the crowd was right behind her, and you could distinctly hear the chorus of thousands singing along with every word. And to top off what was already top notch fan engagement, Florence jumped down off the stage during “Rabbit Heart (Raise It Up)” and sprinted out onto the lawn, where she climbed up on what I’m assuming was part of the sound board. Either that or she had people holding her up – not entirely sure since I could only see the top half of her. But, either way, she was out amongst the fans, being lifted up as if she were the queen and we were just her subjects, which I don’t think anyone objected to. 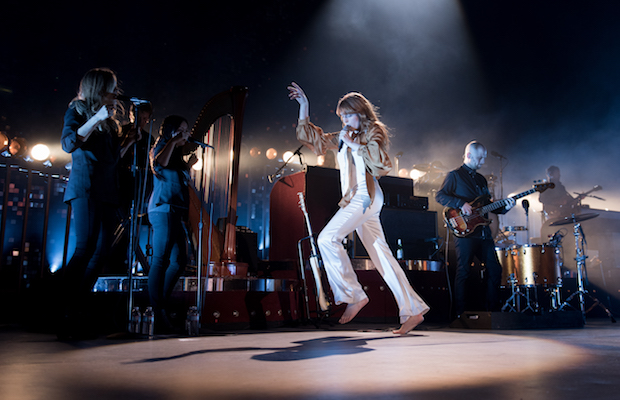 Flo tore through several songs from the new album, including the title track “How Big, How Blue, How Beautiful,” which she said was written during her last US tour and commented that she was happy to see it come full circle by singing where it was originally inspired. She transitioned into a beautifully stripped down version of “Cosmic Love,” which she introduced as one of the first songs she’d ever written, and it just happened to be during a terrible hangover but Isa told her she had to plow through it and write something. She twirled around like a ballerina inside a jewelry box, a connection that was hard not to make as the harp played in the background. Most of the set was made up of newer songs from HBHBHB, but they started breaking out the older hits towards the end of the set, and ended with the anthemic, tribal-like drumming of “Drumming Song” from Lungs.

Although I’ve technically seen Florence + The Machine once before, back in 2012 at Music Midtown in Atlanta, this honestly felt like the first time because it was so much more intimate and intense. I tend to have a flair for the dramatic, but I’m absolutely not kidding when I say that this was one of the best shows I’ve ever seen in my life. I danced, I cried, I laughed, and I sang along to songs I’ve had memorized for years. And it barely even rained! I truly could not have asked for a better evening or for a better first experience at the new amphitheater. So if you missed out and by some miracle they come back to Nashville in the near future, do not sleep on your chance to witness this incredible group live.

What The Water Gave Me
Ship To Wreck
Shake It Out
Rabbit Heart (Raise It Up)
Third Eye
Delilah
How Big, How Blue, How Beautiful
Cosmic Love
Long & Lost
Mother
Queen Of Peace
Spectrum
Dog Days Are Over