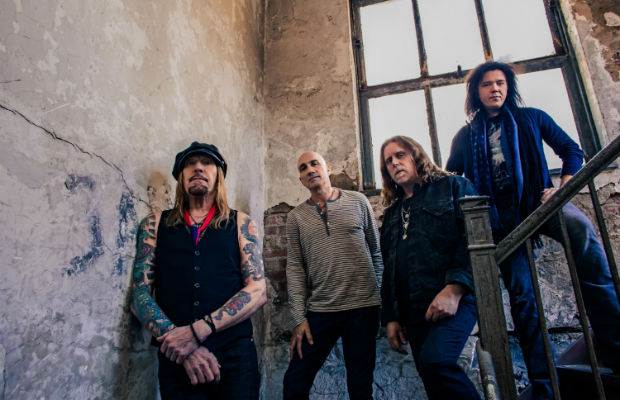 Well it may still be 80 degrees out, but it is fall in Nashville. This means an outstanding lineup from one of our favorite venues, the Ryman Auditorium. Tonight renowned blues and rock guitarist Warren Haynes brings his “Ashes and Dust” tour to the Mother Church with Gill Landry and Chessboxer. Haynes is known most of all for his work with The Allman Brothers and his own band Gov’t Mule. However, tonight finds him in a setting very appropriate for Nashville. He will be backed by popular bluegrass band Railroad Earth while they perform songs from his new acoustic album named after the tour.

As of now, the show hasn’t sold out. Tickets are still available for $37 and $45. Keep reading after the drop for our full preview on tonight’s show. Make sure you don’t wait until curtains to buy tickets because chances are that there won’t be any left at the door.

Warren Haynes hails from just four hours east of here in another burgeoning southern city Asheville, North Carolina. He grew up on a mix of blues heroes and classic rock icons such as Muddy Waters, Jimi Hendrix, Elmore James, and Eric Clapton. These influences led Haynes to a career as a guitar player. Today he is an unstoppable force in American music. He first started playing with The Allman Brothers Band  in 1987 when Dickey Betts recruited Haynes to join the group upon their reunion. In 1994 Warren started his own band called Gov’t Mule and while the Allman Brothers aren’t playing anymore, Gov’t Mule still maintains a busy schedule 21 years later.  Haynes has also occupied his musical career by playing with members of The Grateful Dead, and his solo project which now finds him with Railroad Earth as his backing band.

Warren Haynes claims that he teamed with Railroad Earth because of he wanted to give the album a folk/americana feel as opposed to his normal blues style. He has known the band for quite some time, encountering them at various festivals and collaborations across the country and occasionally collaborating with them at these events. Their recent effort, Ashes and Dust, has a faithful devotion to a story-like song structure that still brings the improvisational bond these artists share to life. It will definitely be quite a ride to sonically experience the collaboration in the best room Nashville has to offer.

One might not be familiar Gill Landry, yet know who Frank Lemon is. Well they are one in the same as Frank Lemon is a stage name that Landry occasionally uses. He is most well known for his time with hometown heroes Old Crow Medicine Show. Landry got his start from his own band called The Kitchen Syncopaters, who recorded a few albums before Landry joined OCMS in 2004. After developing a solo career apart from the band he parted ways from them earlier this year. His self-titled third LP contains such as “Just Like You” and “Funeral In My Heart” that contain soothing melodies and calmer and more relaxed approaches to the folk style OCMS so zealously pursues. Check out “Just Like You” below.

Chessboxer are compromised of Matt Menefee, Ross Holmes, and Royal Masat. The group aims to push the boundaries set in the americana genre. Their songs contain an eclectic range of all sorts of stylistic influences combined with intricate and detailed rhythms. The list of artists the group has played with range everywhere from Bela Fleck to Edward Sharpe and the Magnetic Zeros, and now Warren Haynes. We are very excited to see how they open up the show tonight! Watch the live video from Nashville’s own Stone Fox below.