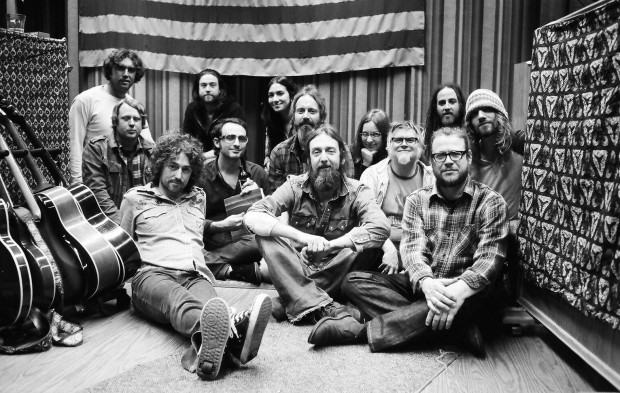 In the same way that the Black Crowes gained notice–and suffered backlash–for wearing their influences on their sleeve, The Chris Robinson Brotherhood, frontman Chris Robinson’s new project, expertly recreate the moves of their classic rock forebears. But where The Crowes mined the ideas of Sticky Fingers-era Stones and Humble Pie, The Chris Robinson Brotherhood walk the well-worn paths of The Grateful Dead. But, what is perhaps most notable about this shift is that, among the hundreds gathered for a sold out show at Nashville’s 3rd & Lindsley on Tuesday night, I think I was the only one to give a damn about influences. The rest just wanted to see the former Black Crowes frontman doing what he does best: sing rock and roll.

The place was packed with the most diverse crowd I’ve seen in years: aging hippies, frat brothers, would-be Deadheads, and middle-aged guys with office jobs and families who presumably retain fond memories of the days when “Thorn in My Pride” was on heavy rotation on MTV. They all went bananas when the Chris Robinson Brotherhood–or CRB, as they are known among fans–took the stage and dove into a rollicking cover of Roy Brown’s “Good Rockin’ Tonight.”

The setlist was a nice mix of old, new, borrowed, and blue, with songs from the trio of official CRB releases: Big Moon Ritual, The Magic Door, and last year’s Phosphorescent Harvest. The air got especially fragrant during a cover of Slim Harpo’s “The Music’s Hot,” which then led into a pair of spacey CRB originals (“Star or Stone,” “Meanwhile in the Gods…”) before Robinson busted out “Like a Tumbleweed in Eden,” a mid-tempo rocker from his New Earth Mud days.

The years have done little to diminish Robinson’s voice. Soulful yet mellifluous, he sounds almost exactly like he did on 1990’s Shake Your Money Maker. Lead guitarist and avowed Deadhead Neal Casal does a stellar Jerry Garcia imitation, playing tasteful leads that go a long way toward defining the CRB sound. But it was keyboardist and former Black Crowe Adam MacDougall who came closest to stealing the show outright, rounding out these tunes with clavicle and Hammond organ but taking solos on whatever instrument Prince played to create that squeaky hook on “Delirious.” (Google tells me it’s an Oberheim synth, but I’m not a synth guy.) It all sounded pretty excellent, but I daresay this is music better suited to the out-of-doors.

Following a short intermission, the band returned noticeably looser, ready to get down and dirty. Casal went into slide guitar mode, lending extra oomph to his leads on tunes like “Ain’t It Hard but Fair” and “Beggar’s Moon.” Then it was time for “Hard to Handle,” probably the Black Crowes’ best-known song even though it’s an Otis Redding cover, and while Robinson appeared to be spitting the lyrics by rote, he managed to make it fresh with a wah-wah guitar solo of his own.

The show ended the way it began, with a cover from rock and roll’s Old Testament: Slim Harpo’s “Got Love If You Want It.” This was arguably the high point of the night, as the tune morphed from a country blues number to Yardbirds-style raveup to AC/DC-style stomper. The band returned for a single encore, with Casal and Robinson coming together in striking harmony for John Russell’s country-gospel chestnut, “Catfish John.” It made for a fitting end to an evening that was half Cosmic American Music, half old-time rock n’ roll.