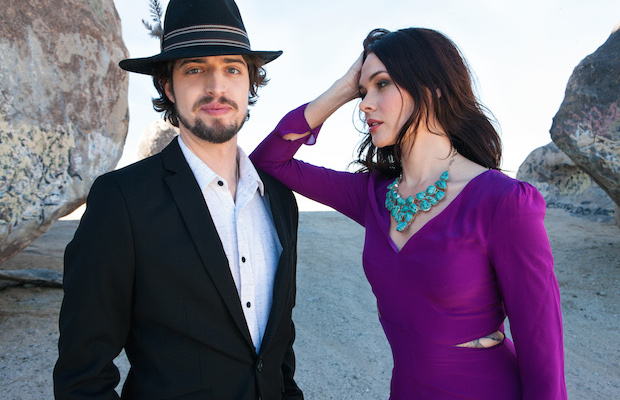 If you’re still kicking yourself for missing out on AmericanaFest last month, you can partially make up for it by seeing two of the event’s standout acts, HONEYHONEY and Kelsey Waldon, this Sunday, Oct. 11 thanks to Lightning 100’s Nashville Sunday Night at 3rd & Lindsley. HONEYHONEY, who recorded their latest album here in Nashville with award-winning producer Dave Cobb, are a dynamic duo that combine painfully honest songwriting with music that is sometimes slow and dark, sometimes fast and loud, but always sultry. Tickets are still available and are only $12, so read on for a full preview and make plans to spend the evening with some incredible performers.

The last time we caught HONEYHONEY at 3rd & Lindsley, they were teasing us with new songs from their upcoming album, which we’ve since been blessed with. 3, appropriately titled for the LA-based duo’s third full-length endeavor, is full of beautifully crafted tunes in typical HONEYHONEY fashion, going from full-fledged southern rock anthems (“Bad People”) back to heartfelt ballads (“Father’s Daughter”) and everything in between. The on-stage chemistry between the two gifted songwriters is something to behold, as well as the smokey voice of lead singer/banjo player/violinst Suzanne Santo. She and guitarist/vocalist Ben Jaffe pride themselves on being able to make audience members go from crying to laughing in under 10 minutes, so don’t miss your chance to personally witness the magic of their show.

Born and raised in Kentucky in a town called Monkey’s Eyebrow (no, seriously, it’s a real place), country singer-songwriter Kelsey Waldon moved to Nashville a few years ago to kickstart her career and released her debut album The Goldmine last year, in addition to stints at Music City Roots and AmericanaFest. She’s been heralded by the likes of Rolling Stone and Billboard as one of the best new voices of country music, so be sure to get there early to check out one of Nashville’s rising stars.