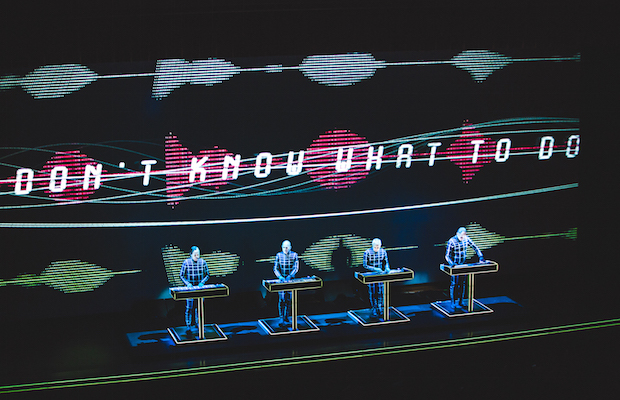 For a good idea of just how ahead-of-their-time Kraftwerk was in their late-1970’s heyday, go to Pandora and create a Kraftwerk playlist. Chances are excellent that for every selection by a similarly hallowed experimental outfit (Tangerine Dream, Can) or New Wave oddity (Devo), you’ll be subjected to three tunes by some “cutting-edge” artist who came along decades after Kraftwerk had found international fame: Orbital, Aphex Twin, Sterolab, LCD Soundsystem.

It is this lasting influence that made Kraftwerk’s performance at the Ryman Audiotirum last Sunday night such a heady and disorienting but ultimately joyful eperience. There we were, witnessing a band of self-identifying German-made machine men playing decades-old tunes that still sound like the future of pop music, in the former home of the Grand Ole Opry. While wearing 3-D glasses. 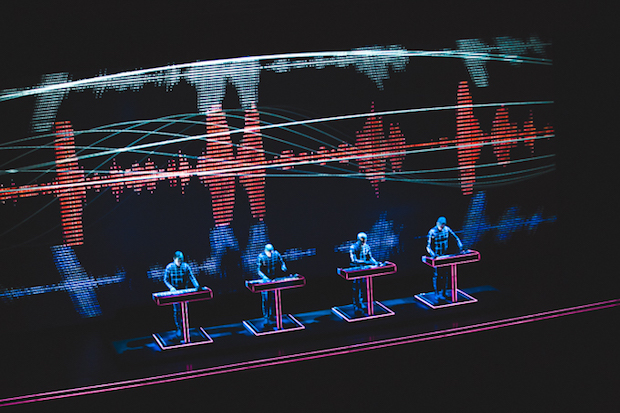 Not to say we didn’t know what we were in for. Kraftwerk is a band whose reputation very much precedes it, as tributes and parodies from the likes of “The Simpsons” and “The Big Lebowski” have piled up over the years, to say nothing of the artists who have sampled their work, including Afrika Baambaataa (“Planet Rock”), Dr. Octagon (“Blue Flowers”), and Beck (“Get Real Paid”). 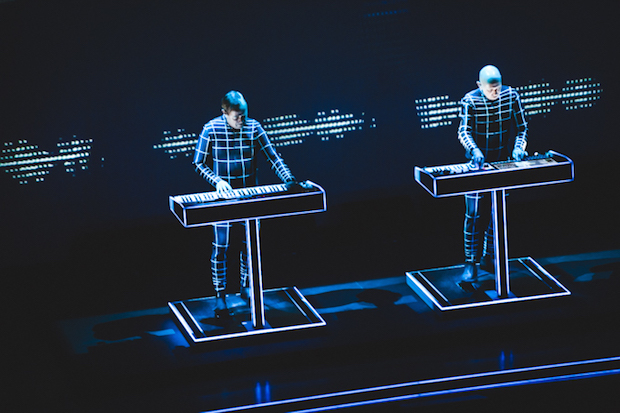 But about the 3-D stuff: Paper glasses encased in tasteful red sleeves were handed out upon entering the venue, and it was made clear from their opener, “Numbers,” that this was an immersive experience. The four bandmembers were dressed in Tron-like uniforms and stood at blinking podiums. As they worked their synthesizers to create those familar, otherwordly grooves, digits on the screen directly behind them pulsated and jumped. 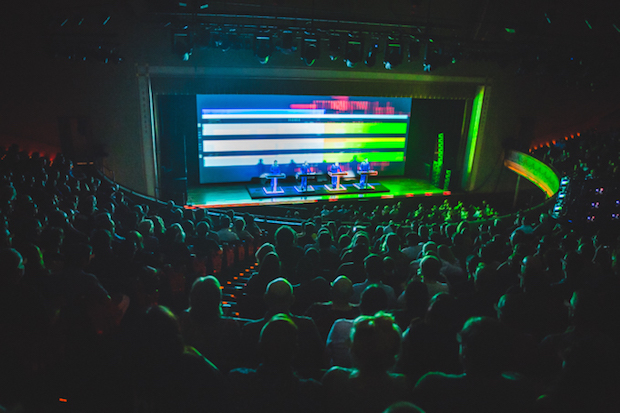 “Laser Zeppelin” this was not. Each song and its attendant 3-D film worked a straightforward theme–“Neon Lights” replicated the experience of a late-night walk through vintage Times Square, “Spacelab” had the audience conducting deep-space maneuvers–but the quality of the filmed images was all over the map, adding to the evening’s unstuck-in-time feel. “The Model,” for instance, displayed a series of black-and-white footage of a European fashion show from the mid-20th century, while “Pocket Calculator,” with its gigantic hand sweeping across a gigantic calculator, was reminiscent of an educational film strip from 1978. Notably, the only hint of technophobia came with “Radio-Activity,” as the screen projected the names Chernobyl, Harrisburg (home of Three Mile Island), Sellafield, and Hiroshima in large calculator font. 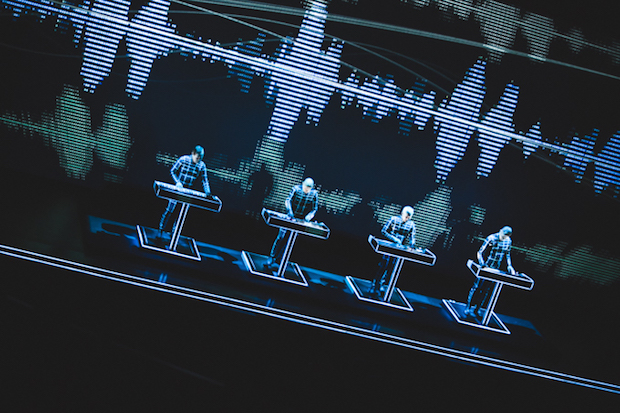 The most entrancing, hypnotic parts of the show came via Kraftwerk‘s longer numbers: “Trans-Europe Express,” a “Tour De France” medley, and their 1974 masterwork, “Autobahn” (with its Beach Boys-like chorus, “fahr’n fahr’n fahr’n auf der Autobahn”). It was here that the happy marriage of man and machine was most apparent, as every 3-D Volkswagen to pass us on our 3-D journey did so with a perfectly timed whooshing sound.

The first of two encores, “The Robots,” was performed by the bandmembers’ robot replacements, who turned their heads and raised their hands in time, sort of, to the music. After a second encore, which included “Aero Dynamik,” “Planet of Visions,” and “Boing Boom Tschak,” each (human) member of the band treated us to a little synthesizer showboating before exiting stage left. Before too long, only founding Kraftwerk member Ralf Hütter was left onstage, taking in the rapturous applause, his hand over his heart. So I guess they’re human after all.

As the lights went up, the spent, Ryman crowd spilled back into downtown Nashville, where all the bloops and bleeps of the evening were quickly replaced with twang, twang, twang. It felt good to be home, wherever–and whenever–we had just been.