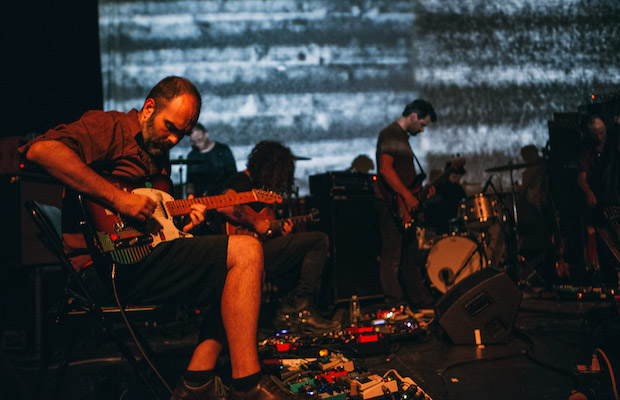 Over the weekend, post-rock legends Godspeed You! Black Emperor brought their tour with experimental duo Xylouiris White to Marathon Music Works. With half of the room blocked off, the crowd was small. However, as everyone made their way into the venue, they were certain that something incredible was going to happen, and those not in attendance were surely missing out.

We have a full review below with some great shots from Amber J. Davis. Check it out and if you weren’t there, hopefully you’ll think twice about missing something like this again.

The plethora of musical equipment was the first thing noticeable upon looking at the stage. Amp heads, cabs, drums, pedals, and cables galore covered the space. Concern over how well Marathon would be able to handle Godspeed’s immense sound was justified. Amidst the crowd were gear geeks speculating on how each amplifier was going to sound in the room and where the best place to stand was going to be. I made my way up front and positioned myself in what I thought would be the best place to sonically and visually experience the show. 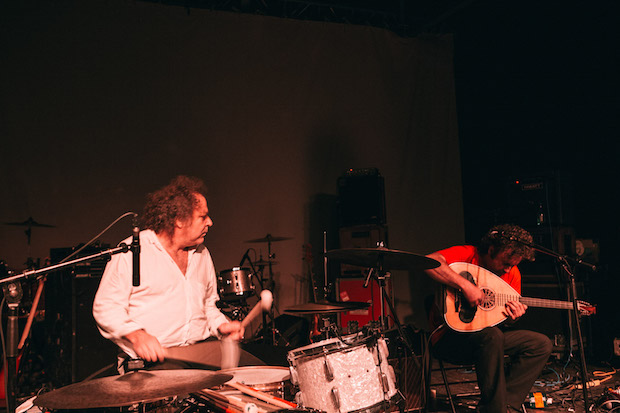 First up were Xylouiris White. The duo are comprised of renowned Cretan lute player George Xylouiris and Jim White (Dirty Three, Cat Power, Nick Cave). Opening for a band like GSYBE can be a daring task, but these two handled it with such charisma and ingenuity. From the very first note, they presented a sound that was so unique and refined. George Xylouiris utilized the lute to every extent possible, procuring such a wide variety of appealing sounds. He handled the instrument great such precision. Xylouiris would play a handful of notes, producing a blast of atonal sound that still maintained detail and quality Jim White played the drums in a manner that both looked and sounded very distinct. His ear for the toms was phenomenal. White used them not only as a force of rhythm but also as a source of tone and texture. Every so often he lifted his left drumstick in the air and glanced at it as if to signify the next section of the song.

The set bounced back and forth between compositions that were rhythmically and melodically rich and sections of noise that were loud and strong. They held the attention of the crowd the entire time. One glance around showed heads moving with the music, trying very hard to follow the direction that the duo was taking. The crowd gave a roaring applause after each song, loving this unusual pairing that perhaps brought about the first time a lute had ever been used at Marathon Music Works. Xylouiris White finished off their set by bringing up Thierry Amar, one of two bass players for GSYBE, for a couple of musical explorations that ended the set on a very energetic note. As they walked offstage the crowd braced themselves for what was to happen next 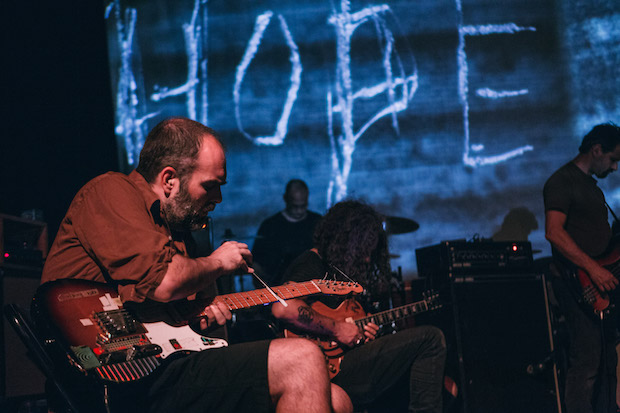 A monotonal bass hum played on the speakers. The band were finished setting up their own equipment. It was obvious that the show was about to start. One by one the members of Godspeed You! Black Emperor walked on stage. They began their set with “Hope Drone,” a blast of looped noise from all of the members. David Bryant, Efrim Menuck, and Mike Moya were very creative and experimental in achieving this power by using such techniques as hitting their fretboards with pencils. All of a sudden everything came down, but not for long. Aidan Girt and Timothy Herzog launched into “Peasantry or ‘Light! Inside of Light!'” with a beat that seemed to punch each and every audience member in the gut. And before we could even recover, the rest of the band joined in for a massive blast of distortion and fuzz.

When the band continued into “Lambs’ Breath” it was pretty evident that they were going to play the entirety of their most recent release, Asunder, Sweet and other Distress, and the crowd seemed to be just fine with that. The new album showcases their ability to bring the listener through a dynamic ride filled with textural layers that are extraordinarily pleasing. Godspeed’s show at Marathon upheld this standard. It was especially amazing to pick out particular parts in the wall of sound they were creating and try to pinpoint where it was coming from. It was all blending together, however each note from each guitar, bass, drum, and violin remained important and distinct. 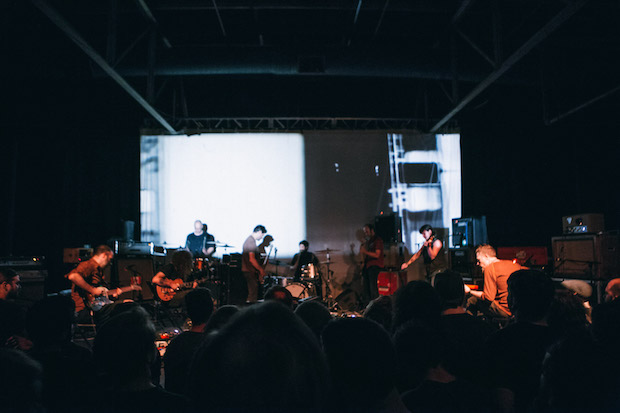 As many GSYBE fans know, the visuals are an important part of the band’s live performance. This show was no exception. Karl Lemieux did a perfect job coordinating the film projections to the music. There was everything from two deers in the headlights to a procession of police cars down a main street strip, which created a visceral and eerie feeling amongst everyone in the crowd. I marveled at how unique and special of a performance this was shaping up to be. Upon leaving the front of the stage and moving to the middle of the crowd, the sound was even stronger. It was a perfect place to listen to the band tear through “New Song 1,” a 15 minute odyssey that featured a strong presence from Sophie Trudeau on violin and a variety of heavy rhythms from Girt and Herzog. The band ended their set with a song from their first album, “The Sad Mafioso.” As they walked off the stage one by one I stood there, shocked and overcome with a rush of all sorts of emotion over what I had just witnessed. I have been to a lot of different shows from many different bands. But I have never seen anything like what Godspeed You! Black Emperor gave Nashville last Saturday. It was an experience to remember and it will be hard to separate it as its own entity and not compare it to any future live performances I see.