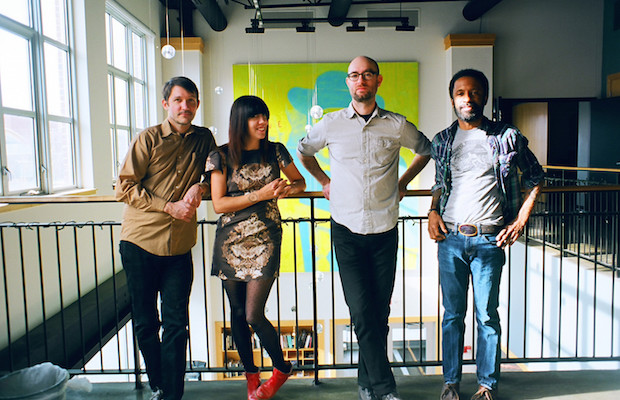 Out in support of their first new full-length in eight years, Everybody’s Coming Down, Omaha indie rock/folk outfit The Good Life return to Nashville for the first time in years to perform TONIGHT, Sept. 4 at The High Watt. Out with Big Harp, the side project of their own bassist Stefanie Drootin-Senseney, the band are channeling a more energized, rock-leaning sound these days, and, along with virtually every other artist on the Saddle Creek roster, are modern day indie legends in their own right. With a ticket price of only $10, you’d be crazy to miss this. Read on for details!

What began as a solo outfit for Tim Kasher, the frontman of beloved emo/indie/post-hardcore outfit Cursive, a place for him to funnel softer, folkier sensibilities into very personal songwriting, The Good Life quickly morphed into a full band after forming 15 years ago, really settling to their sound by breakout 2003 third effort Album of the Year. A part Omaha’s Saddle Creek Records, a label that also doubled as something of a musical collective in its early ’00s heyday, and continues to thrive, The Good Life have maintained their core lineup over the years, while employing a rotating cast of guest players, and definitely channel a sound in line with many of their label mates, such as Bright Eyes. After a bit of an extended hiatus, during which the foursome occupied themselves with various other projects, The Good Life returned earlier this year with their fifth full-length and first in eight years, Everybody’s Coming Down. Something of a musical departure, the new LP is decidedly more rock-influenced, though still has the eclectic, melding of sounds the band are known for. It’s definitely a new era for The Good Life, a reflection of a band with years with a new experiences, and we can’t wait to see how their latest tunes translate live (and, of course, relish in some old favorites).

Big Harp are a Los Angeles band formed by The Good Life bassist Stefanie Drootin-Senseney and her husband, Chris Senseney, during her other group’s time off. The duo began as a more low-key, folky project, before embracing a more indie, rock-skewing influence on their sophomore effort. Big Harp’s latest, this year’s Waveless, essentially sounds like a whole different band; fuzzier, louder, faster, and more confident, and undoubtedly their best album yet.