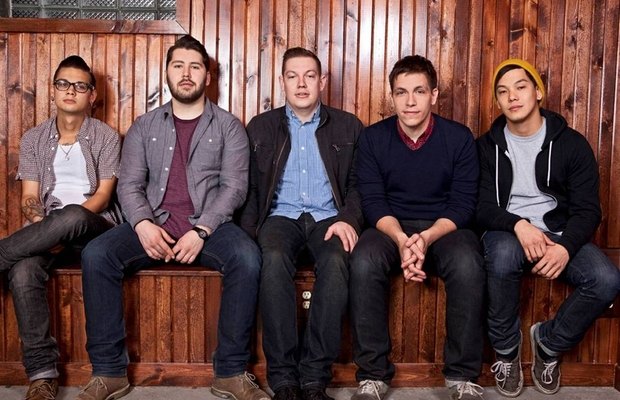 Nearing the end of what might be their last tour ever (or, at least, last tour for the foreseeable future), Detroit pop punk group Fireworks are stopping through Nashville for one last hurrah TONIGHT, Aug. 24 at The End. Sweetening the deal, the band are out with a wonderful lineup of Weatherbox, Souvenirs, and Dryjacket, making this all ages, $14 show a no-brainder for the discerning indie punk/pop punk/emo fan. Read on for details!

Detroit’s Fireworks exploded (no pun intended… ok, some pun intended) onto the pop punk scene nearly a decade ago with their Run For Cover Records backed EP We Are Everywhere, before jumping to tastemaking indie label Triple Crown Records for their first LP, the Chad Gilbert-helmed All I Have to Offer Is My Own Confusion in 2009. Blending elements of pop punk, power pop, and alternative, the band cemented their status as one of the scene’s most promising up and comers with 2011 instant classic Gospel, before maturing and flexing their range on last year’s Oh, Common Life. Veterans of the Vans Warped Tour, Fireworks have toured with acts like New Found Glory, The Wonder Years, and Polar Bear Club, and have amassed a reputation for being one of the most capable, consistent artists among of the recent crop of pop punk revivalists. Unfortunately, this tour marks the group’s last for the foreseeable future, so if you’ve ever wanted to see them live, it’s now or (possibly) never.

Indie punks Weatherbox have forged a reputation over the last decade for crafting smart, genre-bending, lyrically-dense rock in the vein of celebrated acts like Say Anything and Manchester Orchestra. While not exactly a household name (which, frankly, is a damn shame), they’re beloved within the scene, and they’re a nice compliment to Fireworks’ more pop-derived sound. Weatherbox’s latest, Flies In All Directions, was one of last year’s best under the radar releases.

“Emo revival” be damned, we’re just stoked to see so many artists in recent years calling back so heavily to the ’90s heyday of emo and emo-influenced indie rock (and hey, the resurgence of national media covering it is nothing to scoff at either). California’s Souvenirs are definitely pulling from that scene, but also fusing their sound with modern pop punk sensibilities, and the results are spectacular.

Hailing from New Jersey, emo-influenced indie rockers Dryjacket recently signed to Hopeless Records, and are celebrating the release of their debut EP, Lights, Locks, & Faucets. They’re an excellent fit to kick off this show, so be sure to show up early and show them some love.

Fireworks, Weatherbox, Souvenirs, and Dryjacket will perform tonight, Aug. 24 at The End. The show is all ages, doors open at 6 p.m., and tickets are available for $14.