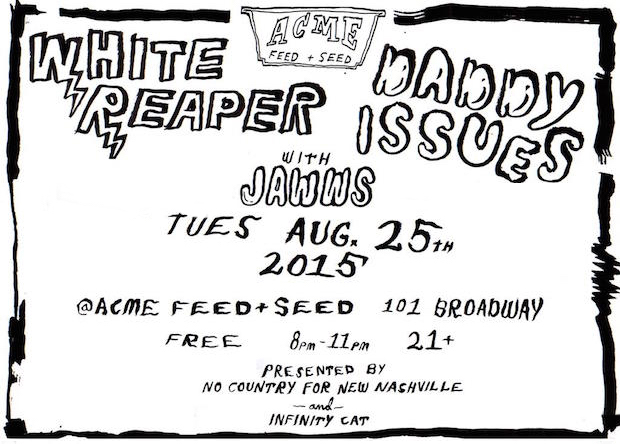 As we announced a couple weeks ago, we’re teaming up with tastemaking local label Infinity Cat to curate an extra special edition of our FREE, weekly, showcase at Acme Feed & Seed, hosted by our live events production wing, No Country Presents. Usually on Acme’s first floor, we’re moving up the the fourth floor rooftop for the occasion, and we’re incredibly excited to bring you Louisville rock and roll upstarts White Reaper, along with local grunge pop trio Daddy Issues and hardcore teenage punks Jawws. This 21+ showcase starts just a little later than normal, at 8 p.m. and should run until around 11. We’re beyond excited to mix things up with a louder, amped up lineup this week, and we hope to see you there! Read on for a full preview.

Fresh off an epic performance at Forecastle Festival in their hometown of Louisville, KY, and celebrating the release of their explosive, debut full-length, White Reaper Does It Again, young rock and roll upstarts White Reaper, whose fuzzy, indie, garage rock sound straddles genre lines just enough to defy classification, are set to return to Nashville for the first time since an in-store appearance last summer at Grimey’s. The foursome have been drumming up quite a bit of buzz in recent months, and right fully so; their LP absolutely rips, and their energetic live show makes them an absolute must watch artist on the rise. It’s no surprise that our amigos at Infinity Cat dig them just as much as we do, and for the price of free, you have no excuse to miss their Nashville return! Check out White Reaper’s new video for “Pills” below!

Local grunge pop trio Daddy Issues have had an interesting path to the spotlight. Unlike many Nashville bands, they haven’t been honing their skills for years with extensive familial pedigrees. In fact, they only decided to try to write music a little over a year ago, and then had to teach themselves how to play instruments. However, one of their singles, “Ugly When I Cry” (below), caught the ear of Infinity Cat, and, a few months later, they found themselves showcasing at SXSW; from there, things have moved fast. Celebrating the June release of their debut album, Can We Still Hang, through the 2nd annual Casey Weissbuch-curated Infinity Cat Cassette Series, Daddy Issues have been popping up on local bills left and right, and are quickly becoming one of Nashville’s most celebrated new artists.

Despite the fact that some members aren’t even out of high school, hardcore punks Jawws have been ripping their way though the local scene, kicking some serious ass in basements, houses, and clubs around town. The string of singles and 7-inch records they’ve dropped over the past year or so just keep getting better and better, and we have no doubt that they’ll be ruling the Nashville punk scene before you know it.

White Reaper, Daddy Issues, and Jawws will perform Tuesday, Aug. 25, at Acme Feed & Seed. The show is 21+, music begins at 8 p.m., and, per usual, it’s totally FREE. Downtown PARKING can sometimes be an issue. However, if you’re willing to walk a few blocks, street parking is typically easy to find on the numbered avenues south of Broadway, or along Korean Veterans Blvd. Metered spaces are often free after 6 p.m.