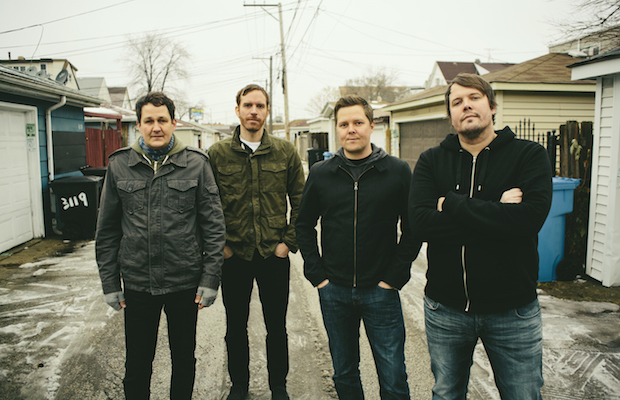 Nostalgia can be a difficult thing to navigate. When nostalgia is simply a byproduct, and not a driving factor in creating art, however, it can provide a wonderful, symbiotic energy, and fuel progress by embracing the strengths of the past. Seminal emo rockers Braid reformed before the so-called “emo revival” really hit its stride (perhaps even helping kickstart the resurgence, rather than awaken because of it), and have, over the past few years, managed to find a balance between the nostalgic, never-fully-appreciated-in-its-time appeal of their earlier days, with the forward-pressing, sincere need to pick up and keep creating. Nostalgia is also what forged the complex, throwback punk updated-for-a-modern-era sound that makes Beach Slang so buzzworthy, and so hard to pin down. Likewise, local up and comers Free Throw, one of Nashville’s most promising punk bands, rely on not only golden era emo and early ’00s pop punk to inform their earnest sound, but litter than music with pop culture references to their younger days. It seems nostalgia might also be the thing that binds these three very different, but very skillful artists, who stopped by Exit/In last week to deliver one of our favorite shows of the year so far (unfortunately, our photographer seems to have disappeared; apologies for the lack of photographic evidence).

While Free Throw have become something of the go-to local for warming up pop punk and emo tours passing through town, their presence is always a welcome one, and I never get tired of sing-screaming along to their angsty, emotional tunes. The band’s full-length debut, Those Days Are Gone, is something of a vastly under appreciated modern scene masterpiece, and, while their earlier days were definitely characterized by a more carefree, party mentality, their serious approach to crafting good songs has finally yielded a stronger, more refined live show to match. Free Throw have been touring a lot lately, and it shows. While some noticeable hiccups occurred throughout (they’re settling in with a new drummer, I’m told), frontman Cory Castro has never sounded better; confident, relaxed, and welcoming while spilling his guts though deeply personal lyricism. Like local peers Better Off, Free Throw’s trajectory seems endless, and I can’t wait to see them become Music City’s next pop punk success story; for now, though, it’s always a treat watching them kick off these types of shows.

After a quick changeover, Philadelphia’s Beach Slang erupted into a set I had no real preconceived expectations for, but one that near-instantly won me over.  I think I was a little late to the Beach Slang party, or else they seriously did just explode over night, because after hearing about them every once in awhile in passing, I quickly noticed every punk-minded friend’ obsession, not yet having listened for myself. Though they only have a handful of tracks to their name, frontman James Snyder has spent years playing in various other pop punk projects, growing up in the scene Braid helped influence, and funneling his years of experience into something with a strong footing in the past, while maintaining an edgy, exciting eye towards the future. The trio’s set was explosive, and, largely, consisted of songs I didn’t know; no matter, it just built up my anticipation for their upcoming LP (and hopefully a quick return to Nashville). A humble, likable frontman,  Snyder filled awkward silence with inside jokes, rants, and meandering stories, giving us a glimpse into the mind that makes such eclectic, extraordinary music. The band I knew the least about in advance, Beach Slang left me endlessly excited about their (sure to be long-lived) career by the end of the night.

Inching towards late night status, Braid took the set to a humble but enthusiastic audience (it seems a lot of would-be Nashville attendees had already booked it to Atlanta, where the tour was headed next for The Wrecking Ball fest), in front of a simple backdrop that just broadcast their name in a larger than life font. Though the group have been back together for a few years now, their touring has only recently ramped up; since I was a bit too young to catch them the first time around, this marked my first ever Braid show, and I was ecstatic. This was Braid’s first time in Nashville in 11 years; a fact we trumpeted it advance, and they proclaimed from stage, only to discover a handful of diehards who were there more than a decade ago as well. I first got turned on to the band through 1998’s Frame & Canvas, an album I missed when it was new, but rediscovered a few years later when emo and pop punk became my unquenchable obsession. As masterful as their back catalogue is, I’m also a huge fan of last year’s No Coast, and that’s coming from someone who would generally rather see nostalgic acts leave their legacy untouched (again, back to Braid reuniting for the right reasons; themselves, as much as fan demand).

Looking remarkably spry for a band more than two decades into their existence, playing songs that capture the trials and tribulations of youthful experience, Braid absolutely captivated with a solid mix of new and old tunes. No Coast tracks “Bang,” “East End Hollows,” and, of course, the mesmerizing title track, brought Braid’s relevance full-circle, showing they can still hang with the talented, younger crop of bands they’ve directly influenced, while “Killing a Camera,” “First Day Back,” “Breathe In,” and the rest of the Frame & Canvas heavy set instantly transported me back to my teenage days, discovering a band with such emotional complexity and otherworldly ability to distill and express feelings in a universally digestible and relatable way. In the nuance and assuredness of Bob Nanna and Chris Broach, Braid felt as authentic and relevant as ever, and, while in different places and many years removed from the feelings that fueled their most influential period, they’re still able to recapture it with a genuine spirit of emotion, not a forceful reinterpretation. Easily one of the best, most important bands of the emo/indie scene of the late ’90s, Braid’s influence is immeasurable, and seeing them live, in 2015 no less, was an absolutely surreal experience. Check another one off the bucket list.