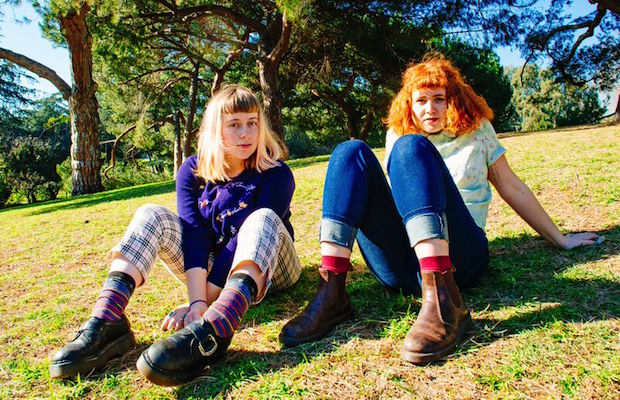 Two rising starts in the indie world, Girlpool and Frankie Cosmos, are set to perform at The Stone Fox tonight, Aug. 10 with support from local rockers Study Hall. Philly by way of LA duo Girlpool are out in support of their minimalist, introspective punk debut, while New York’s Frankie Cosmos are still riding high on the buzz from last year’s Zentropy. For only $10, this is an absolute can’t-miss, so grab your tickets here and read on for details!

Born and raised in Los Angeles, the members of buzzworthy indie duo Girlpool, Cleo Tucker and Harmony Tividad, relocated to Philadelphia late last year for a change of scenery, following the overwhelmingly positive response from the blogosphere to their (initially) self-released debut EP. Picked up by Wichita Recordings, the duo re-released their EP last November, and their debut full-length, Before the World Was Big, just arrived in June. With a minimalist, stripped down, approach (only guitar and bass, a few chords, and straightforward harmonies), the duo have developed a unique blend of earnest, punk informed indie pop, with a dash of folk influence. Personal and intimate, the musical simplicity yet emotional complexity of their sound is hypnotic, and the young group seem poised to transcend the indie world before you know it.

What began as something of a solo alias and has since morphed into the moniker for a permeant band, Frankie Cosmos is the brainchild of New York singer-songwriter Greta Kline, who also previously made music as Ingrid Superstar. The daughter of actors Kevin Kline and Phoebe Cates, Kline’s sound draws inspiration from New York’s famous anti-folk scene, and is informed by the contemporary arts community of the city, as well as the pockets of diverse musicians that surround it. Though she’s been prolifically releasing self-recorded collections of songs for several years, exploring elements of indie rock, indie folk, and lo-fi pop, Greta debut her most concentrated, full band, label-backed effort Zentropy last year, with a followup on tap for 2015.

Hailing from right here in town, Study Hall refer to themselves as “the most nervous band in Nashville.” Featuring members of Dirty Dreams, Fox Fun, and Weekend Babes, the group’s dynamic, lo-fi sound has earned them spots supporting  Bully, Pujol, Juan Waters, and more, and they’re a great pick for kicking off this show right. Be sure to show up early to catch them!

Girlpool, Frankie Cosmos, and Study Hall will perform tonight, Aug. 10 at The Stone Fox. The show is 18+, begins at 9 p.m., and tickets are available for $10.