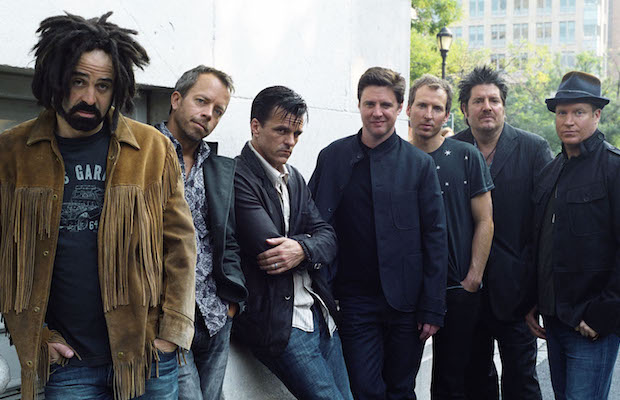 The past week has featured tons of great shows at the brand new Ascend Amphitheatre downtown, but, if you have yet to check it out yet, Counting Crows’ Somewhere Under Wonderland tour makes a stop there tonight, Aug. 7 along with Citizen Cope and Hollis Brown. We recently curated a block of music for Counting Crows’ singer Adam Duritz’s Outlaw Road Show, which took place at The High Watt and Mercy Lounge, where the beloved band played an intimate secret set. Duritz and the boys only left us wanting more, so we can’t wait to check them out as Ascend tonight. Tickets are still available and will run you $25-$99.50. The show begins at 7 p.m. with doors at 6  p.m. and it will be an all ages event.

Released 13 years ago, the Counting Crows’ first album, August and Everything After, almost instantly connected with fans all over the world, and quickly sold millions of copies. Over a decade later, they’re still radio mainstays and still churning out great new music. They recently made public their love of Nashville when they chose our city to host to this year’s Outlaw Road Show and played a stunning, scaled back, several hours long set to the fans who were lucky enough to find out about, or stumble upon, the free late night set at Mercy Lounge. Whether playing in a small room or at an amphitheater like Ascend, their shows are always memorable and feature classics we all know by heart, as well as newer material.

Citizen Cope has been playing his acclaimed blend of bluesy soulful alternative style since the 1990s, and found significant acclaim with his dubby hip hop influnced style, as evidenced in his 2002 hit “Let The Drummer Kick” from his self titled album. His songs have retained the same style over the years, and have led to high profile collaborations with Santana and Sheryl Crow to name a few. His live show is always entertaining, and tonight will be a sort of homecoming for Citizen Cope, who was born in Memphis.

Hollis Brown formed in 2009 and since then have released several albums, the latest of which is called 3 Shots. While Hollis Brown may have started off like many New York rock bands, they’ve become a distinctive, impressive group who make sure to keep the songwriting at the front and center of their sound.  They weave together electric and acoustic sounds to create something new, a modern band with a classic sound. Their most recent album features a duet with Nashville’s Nikki Lane called “Highway 1.”

Counting Crows, Citizen Cope, and Hollis Brown will perform tonight, Aug. 7 at Ascend Amphitheater. The show is all ages, begins at at 7 p.m. (doors at 6 p.m.), and tickets are available for $25-$90.