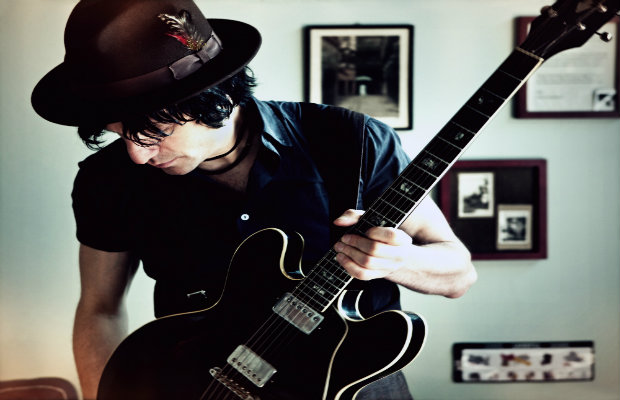 If there’s one thing you walk away from a Jesse Malin show believing, it’s that he appreciates each of his supporters, and that he’ll never let the size of an audience dictate his performance. Though Malin’s show at The High Watt was woefully attended, he put on a performance befitting an arena. It was an upbeat show that had people dancing almost the entire time, with Malin making frequent trips into the audience, and even dragging his microphone cord halfway across the room to stand on the bar. Malin band member Don DiLego, rootsy singer Michaela Anne, and local favorites Blackfoot Gypsies started the night off. Read the full review below.

After an opening set from Jesse Malin band member Don DiLego, and Michaela Anne’s rootsy band (who weren’t originally billed), there came another surprise. Local bluesy, country-tinged rockers Blackfoot Gypsies, also not originally billed, took the stage to debut several new songs and perform a few from their last album, Handle It. They wasted no time trying to fit as many songs as possible into their 30 minute timeframe, and as they ripped through song after song, people in the crowd were shouting and singing along. After an enthusiastic round of applause at the end of their set, multiple people were heard thanking their friends for dragging them out and asking just who IS that band. They were the perfect opener to liven up the mood before Jesse Malin played.

While Blackfoot Gypsies put on an awe-inspiring show, they were not to outshine the headliner. Malin was a complete showman on stage, and in the least cheesy way possible. He was energetic, enthusiastic, and excited to tell the stories about his songs. As he regaled the crowd with stories about growing up, traveling, and writing songs, he included character voices, including a perfect impression of Tom Waits, and went into all the little details that make his stories so interesting. In one of his asides, Malin explained how he’d never tried drugs, and it was evidenced in the performance that the music was the only high he needs.

The audience was riveted throughout most of his set. Malin mostly covered material from his latest album, New York Before the War, with just the right sprinkling of older songs and classic covers that had the audience singing along. He’s one of the highest energy performers around and he led his stellar band, including trumpet and sax players who played from atop speakers near the stage, through songs that kept everyone moving, including Malin.

Malin took multiple trips out in the audience to move around with them and sing directly to different people. He climbed atop the bar to lead the crowd in song, and close to the end of his performance he slowed down the set by walking out into the middle of the floor and asking everyone to sit down. The crowd gathered in around him, sitting like school kids in a circle, turning the club into a hushed, intimate, church-like experience.

And though Malin said he rarely does encores, at his Nashville show, he came back and played three more songs to an audience who still wanted to hear more.