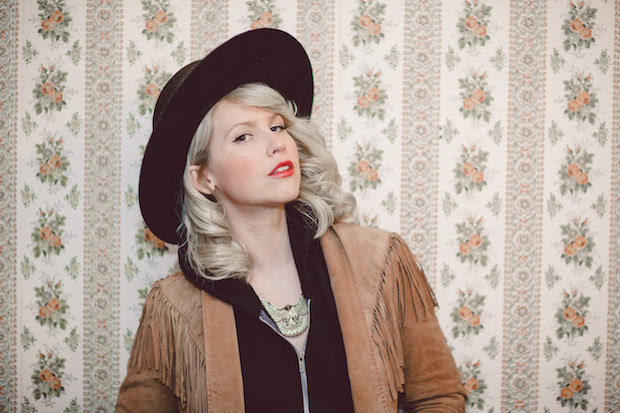 Pony Boy is a very cool girl, real name Marchelle Bradanini, who is about to release a full-length LP’s worth of her western-tinged alt-country and punk influenced material that we got but a taste of with her 2014 EP The Devil In Me. The record, Blue Gold, which was produced by Adam Landry (Deer Tick, Diamond Rugs), sees the partially Nashville-based singer-songwriter looking back on her time spent living in southern California, where she studied politics and poetry. She’s referred to her music as “junkyard country,” a style rooted in country music but throwing all kinds of other junk from punk rock to the blues to soul to southern gothic Americana to alternative into the pot with it. She’s country enough to have had her music featured on Nashville and she does wear lots of fringe, but with even the smallest peek into her oeuvre, it’s obvious she’s no Nashville major label product.

The debut single “Metal Dreams” is a slow, moody burner with tremulous guitar. The video is set in Los Angeles’ Chinatown neighborhood and co-stars comedian Chris Crofton, whose name you might recognize from the hilarious advice columns he pens for the Nashville Scene. You can watch it after the jump, and catch Pony Boy’s record release show at The Basement August 29.