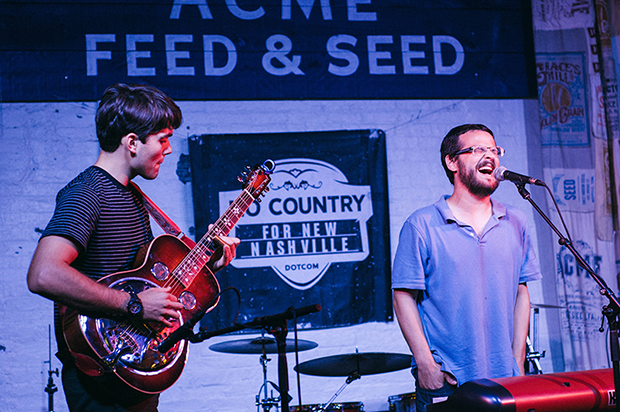 We would like to continue to welcome all of you reading this out there in Music City and beyond to Acme Feed & Seed every Tuesday night, for the weekly showcase from our live events wing, No Country Presents! This past Tuesday’s bill featured seasoned songwriting troubadour Johnzo West, Southern style rock ’n’ rollers Willie and the Giant, and indie popsters Orlinda. Read on for a recap, and for some great shots from contributing photographer Amber J. Davis.

Behind on writing, this past Tuesday I was forced to bring my laptop along to Acme Feed & Seed to get caught up while I enjoyed the performers. I want to take a second to apologize for being ’that guy,’ before continuing on with this post. Usually plugging in the head phones for my writing session, my iTunes library wouldn’t be needed, because I had amazing live background tunes all night long. Before the night’s entertainment was through, I’d downloaded some new tunes to add to my library as well, courtesy of our stellar line-up. 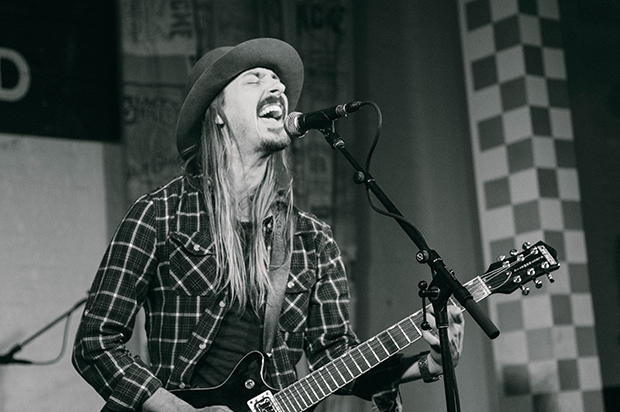 Starting off the night was Indiana bred singer songwriter, and rock guitar guru, Johnzo West. He’d brought along his backing band, The Wayward Souls, who also happen to be from Indiana, even though the band was formed in LA; where they currently rest their heads. West’s voice reminds me of a slightly more polished version of Phosphorescent. His arrangements have a chill blues rock vibe with an upbeat tone. Think Tom Petty riffs with Eric Clapton level solos. All his originals were wonderful, including my favorite “Heart Of Stone.” In addition to working with the Cyrus family, West seems to have plenty of famous local friends, as Clare Bowen of the ABC’s Nashville was spotted in the crowd. However, the highlight for me came during a cover song, as is usually the Broadway tradition.

“Hang on a sec,” West told the crowd at about the halfway point. “We’ve got a strange feeling, and we gotta go with it. Please feel free to sing along.” They then launched into a random ass cover of Robert Holmes’ song “Escape (The Piña Colada Song),” sung by the band keyboardist. Definitely a No Country Present’s first, and we must thank Johnzo and his homies for that. 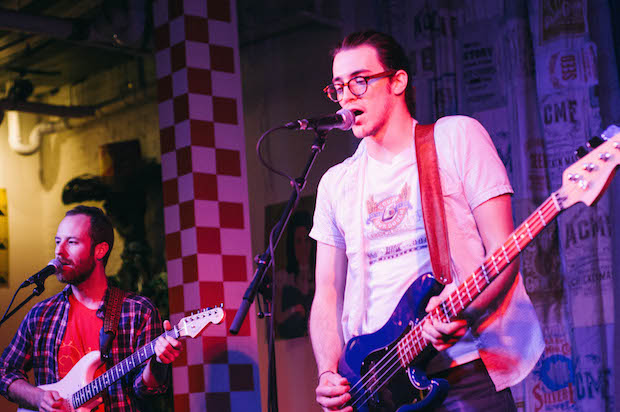 Willie and the Giant. Photo by Amber J. Davis.

Our next performers were back for a second tour of duty, and once they started their set, I remembered why we were so eager to have them back. Willie and the Giant first graced Acme’s stage in the infancy of our partnership with the hip downtown hang out. Since then, the band seems to have only gotten tighter, playing cleaner and hitting all the right notes. Of course touring and giging around town is only going to help, and that’s exactly what WATG have done since releasing their awesome full-length debut back in April. Their now familiar set was a perfect mess of Southern rock and pop polished blues. With lyrics like “best mother fucker around,” and “you like that big boy lovin’,” the track “The Best” is hands down may favorite. Get it, and the rest of their record in your life ASAP. 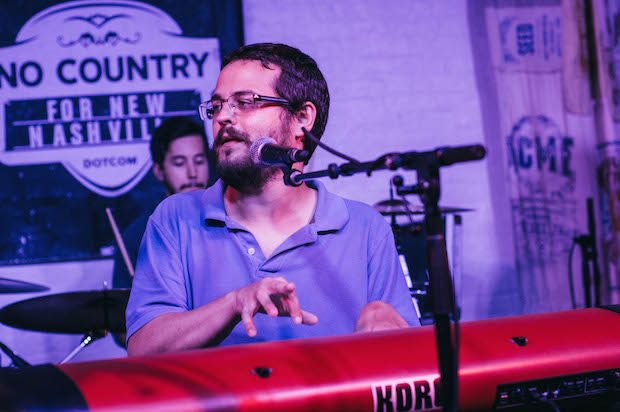 Closing out the night was the recently re-branded band Orlinda (formerly Wabash). They got their new name from the tiny Tennessee town where they got their start, and it’s a little tonge-in-cheeck. Apparently the rural town was not pleased to have musicians practicing late night, and the cops were frequently stopping by their pad. Good thing they moved to Nashville.

They have a grittier Decemberists feel, with a young Elton John-esque vocals. Their duel guitars add wonderful layers to unique arrangements, that sometimes channel elements of The Beatles. At times they’re equally rock and funk with pop sensibilities. Orlinda certainly touch a lot of bases. Stand out songs include “Hey Jack,” and the radio ready lead single, ”Caroline,” from their new EP, Something Borrowed. They can also strip it down to dramatic effect, as they did with a song with just vocals and resonator guitar I recognized from their Silo Sessions Youtube video. Versatile performers that need to be in your music rotation.

After their set I was able to say I’d finished all my work and enjoyed yet another Tuesday at Acme with my friends and fellow music loving strangers alike. The weekly get-together rolls on July 21st, when we welcome Jake McMullen, Pilot Rouge, and Future Thieves. Also, be sure to check out the great photo gallery below form Amber J. Davis. Hope to see you Tuesday!