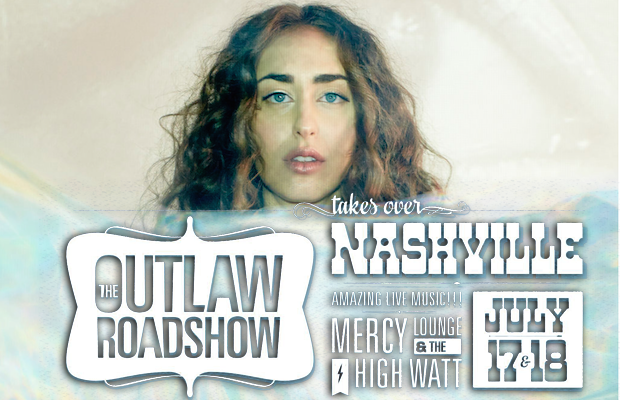 Co-founded by Ryan Spaulding (radio host and founder of the popular Ryan’s Smashing Life blog) and Adam Duritz (of Counting Crows fame), The Outlaw Roadshow is a curated musical showcase (similar to Communion) which is, for the first time, hosting an event in Nashville on July 17 and 18 at Mercy Lounge and The High Watt. Totally FREE and boasting an incredible, growing lineup, the Music City installment is presented by Lightning 100 and Native, among other talented partners, and we’re thrilled to announce that we’re also curating a block of our own as part of the 30+ artist set. As they’re announced over the next few days, we wanted to make sure you really got to know our hand-selected artists. Following yesterday’s exciting addition of indie pop songstress CAPPA, we’re bringing you another local rising star we can’t get enough of, dreamy, synth pop singer-songwriter Fleurie!

The live moniker of Michigan transplant Lauren Strahm, Fleurie is an artist we first experienced live at a recent Cause a Scene show with Foreign Fields. To put it mildly, we were blown away. Like CAPPA, Fleurie has seemingly undergone something of a musical transition of of late. While she has plenty of material floating around already, specifically from her 2013 EP Fear & Fable, the bulk of it takes a more straightforward, piano-driven, pop rock approach, a la Regina Spektor. Even then, with the occasional layered instrumentation and atmospheric production, there were hints the Flurie to come.

With her new single, “Fire in My Bones,” out ahead of the Sept. 4 release of her upcoming EP, Arrows, Strahm finally showcases to the world the sound we experienced at her recent show. More experimental, dreamy, and ethereal in nature, Fleurie’s new direction melds her piano pop background with sweeping synths, electronics, and stylized production, all stitched together by her enchanting vocals and earnest, introspective lyricism. The explosive, confident sound of an artist transcending from unique talent to decisive trailblazer, Fleurie’s lush new sound, at once profoundly layered and tastefully minimalistic, benefits from her own co-production, and just begs for the world to take notice.

Primed to garner attention from fans of artists like Banks, Lorde, and FKA twigs,  the budding singer’s tunes are translated live, at least when we witnessed them, with the help of only a skilled drummer and keyboard player, Strahm handling vocal duty (something she admitted was a new experience for her, having previously performed from behind a keyboard). With her EP release looming, we expect tons of new tracks to be on full display at The Outlaw Roadshow, and encourage you to catch Fleurie now, before her inevitable forthcoming fame takes to her bigger places.