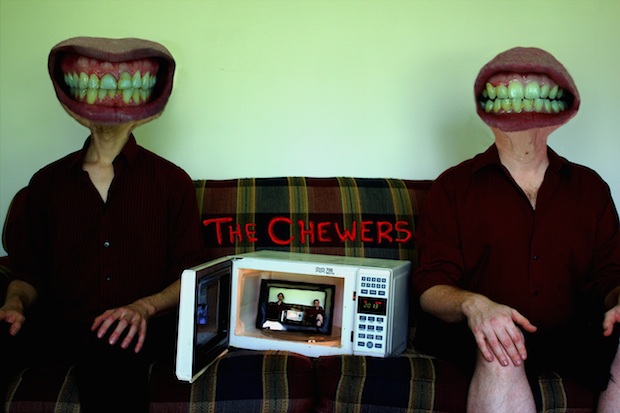 We’ve been loving The Chewers’ super weird new album Dead Dads, which comes out officially on June 13. The avant-garde punk duo hail from the woods of West Virginia to make strange punk that I would believe was by some Television-esque group from the ’70s, if someone told me they were rejects from the NYC punk scene rather than a new band working in Nashville’s underground. They’re throwing an album release party at their house venue Mouthhole located at 397 Oakview Dr. in East Nashville tonight, June 12! Everyone who comes gets a CD copy of Dead Dads and gets to participate in the filming of their film “Need to Feed” and music video for “Rot Gut.” Punks bands Heinous Orca, Cuntalopes, and The Strumms are also on the bill to help The Chewers celebrate the release of Dead Dads, and the show is FREE. Find out more about The Chewers and the other bands after the jump.

The duo The Chewers are like a noisy, weird mix between punk á la the Talking Heads and Television and experimental rock and roll like Captain Beefheart and Frank Zappa. While recording the music for their latest album, both of the Chewers’ dads died, and that skewed their already strange music in a darker and also more poignant direction. Dead Dads is irreverent and often darkly hysterical, with songs lamenting current trends (“It’s All the Rage”) or sung from the perspective of a cockroach waiting for humanity to end so he can take over (“King Cockroach”). This band is bizarre, and, if to you that’s a positive adjective, then you’ll probably love them.

Heinous Orca relocated to Nashville from Bloomington, IL, and make punk-New Wave with a female singer that sounds like a major throwback to Blondie or X during those bands’ primes.

The Strumms are another punk group, making this a show anyone with a fondness for the genre should definitely consider. They describe their music as political post-punk, and take strong anti-consumerist, rebellious stands.