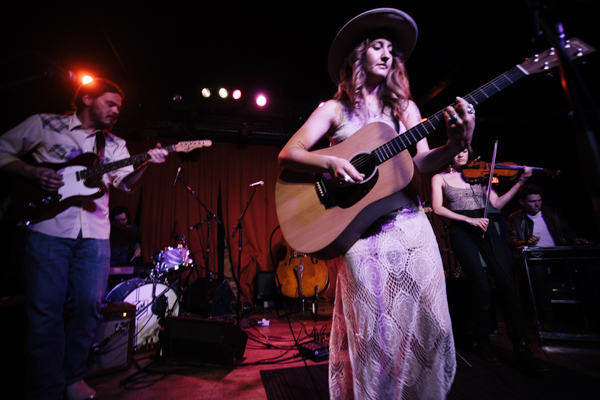 If you haven’t checked out the new Basement East yet, this Thursday night one of Nashville’s best country acts Margo and the Pricetags are headlining a show with a killer lineup of locals that includes guitar virtuoso William Tyler, singer-songwriter Josh Farrow, and folk-pop band Great Peacock. This lineup consists completely of great Nashville-based acts that you’ve heard us talk about before, so it’s the perfect night to head to the newest venue on the east side and check out some of the talent that earns this town the name Music City. The first few lucky people at door will get a pretty badass Hatch Show Print poster for the gig with their admission, so come early. Click through to pick up your tickets (we’ve heard they’re going fast) and read more about the bands.

You might recognize Margo Price from her former rock outfit, Buffalo Clover, but she has now focused her efforts on her classic country project Margo and the Pricetags. Her voice and songwriting are reminiscent of the great women of country like Dolly, Patsy, Tammy, and Loretta. Price is an authentic outlaw in style and substance, and has the same ability to be simultaneously a badass, deeply sad, and strong as hell like those legendary women she calls to mind. The mournful “Since You Put Me Down” is a great country heartbreak ballad in the vein of Hank Williams Sr. That’s real country, folks, not that poppy garbage this city gets rich off. Check out an interview we did with Price a while back and Margo’s recent Daytrotter session here.

William Tyler is a local guitarist — and known around town for being part of The Stone Fox family — who makes impressive instrumental soundscapes with a single instrument. I caught him most recently opening for Jack White at his Bridgestone Arena spectacle, where Tyler took the arena stage alone and filled the huge space with layers and layers of guitar sound that felt like the soundtrack to a trippy old movie set in the South. This show promises him playing with a band, so the sound should be even more lush.

The folk-pop band Great Peacock just released their debut full-length album Making Ghosts this spring, and they’ve gained a lot of good attention from that release. The group of southerners call Nashville home and see their music as a combination between authentic Americana roots music and arena pop-rock. The record is sort of like a pop-rock album with country instrumentation, heavy on the harmonies.

Margo and the Pricetags, William Tyler, Josh Farrow, and Great Peacock will perform Thursday, June 4 at The Basement East. The show is 21+, begins at at 8 p.m. (doors at 7:30 p.m.), and tickets are available for $7.