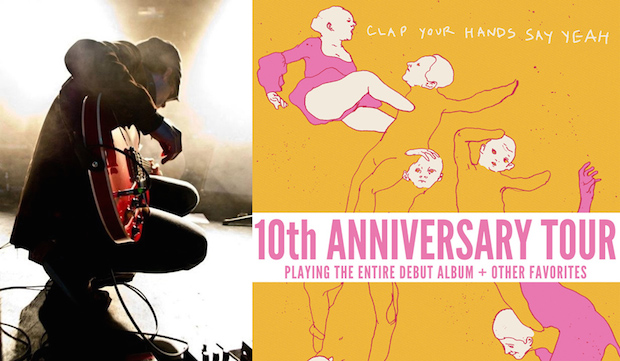 In celebration of the release of their debut self-titled self-released album, Clap Your Hands Say Yeah is embarking on a tour this summer to fulfill the fantasy of all us fans that weren’t lucky enough to catch the indie rockers in their early heyday.  Tickets are still available for their show tonight at Exit/In, and you can snag those here.  Things get started at around 9pm with Teen Men.  Head below to find out more about this not-to-miss evening.

It’s been 10 years since Clap Your Hands Say Yeah first burst out in the NY scene with their highly acclaimed self-titled debut, which subsequently blew up the internet after critical acclaim from a then relatively young music blog community.  This hype led to multiple pressings and more full length recordings.  However, fans of the initial album will always hold a special place in their heart for the debut, and the long awaiting repressing of the vinyl copy (which just dropped yesterday) is on most of those fans shopping lists this week.  Why not just grab a copy while listening to the band perform Clap Your Hands Say Yeah in it’s entirety at Exit/In on Wednesday night?

Comprised of Nick Krill and Joe Hobson (of The Spinto Band) along with Albert Birney and Catharine Maloney, Teen Men play a unique blend of experimental indie rock. Their music is a mix of melodic-psychedelic guitar, keyboard, samples and electronic/ambient tones. They jumped on this tour with CYHSY to support their self-titled debut, which drops next week.  You can get a taste of what they are all about with their first single, “Hiding Records (So Dangerous)”, below.