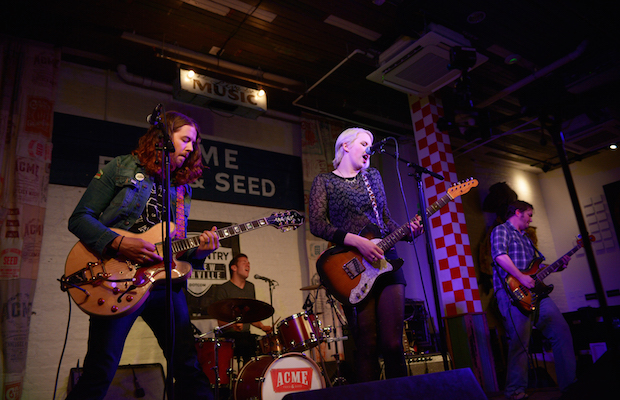 Every single Tuesday since last summer, we’ve been teaming up with hip downtown restaurant and performance space Acme Feed & Seed to host a free showcase of some of our favorite emerging local and national talent. For our latest installment, we were thrilled to bring you local rocker and longtime friend of the site Lauren Strange & The Pretty Killers, along with buzzworthy local indie pop up and comers CAPPA (the guest on our latest No Country For New Nashville Podcast) and Trenton. Read on for more about it! 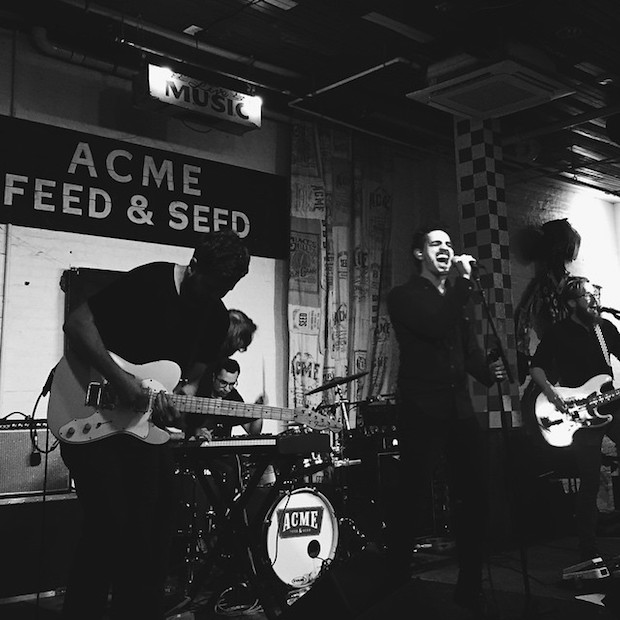 I’ve long heard lots of buzz surrounding Ryan Courtney, the musical mastermind behind Trenton, but hadn’t yet had the opportunity to see him live- yet another reason I love curating these Acme showcases. Curious to see what his live setup would be, I arrived early, only to discover one of our biggest, most enthusiastic Acme crowds of purposeful showgoers (as opposed to dining patrons or tourists who happened to wander in) ever. Deck out in black, Trenton took the stage with a confident and seasoned swagger, backed by a pretty conventional guitar/bass/drum setup of backing players. Making use of a healthy dose of electronics, the performance employed the use of a lot more organic instrumentation than I would have guessed, from the dense, sweeping material of the singer’s back catalogue. Now three albums deep with a fourth on the way, Courtney is already a seasoned performer, and his polished, tight, and skillful style helped perfectly bring to life the moody, poppy, ambient atmosphere of his genre-bending style. At his core, Trenton is a simply a strong songwriter, and one whose songs can surely hold up to any arrangement or instrumentation, both live and in-studio. I can’t believe it took me so long to finally see his live show, and I definitely and wholeheartedly expect 2015 to be the biggest year yet for this skilled up and comer. 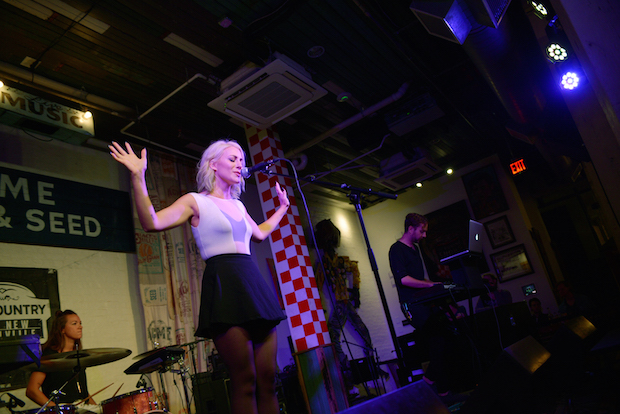 While Tuesday was supposed to be CAPPA’s first show ever as CAPPA (the new live moniker of Carla Cappa, who recently pivoted her style and sound to this wonderful, moody, poppy new direction), a pop up set Sunday evening with Fancy ended up taking that title. That show, a sold out performance at The High Watt, provided an excellent preview of what this budding starlet is capable of, but her Acme outing, benefitting from more balanced sound, really provided the full picture: CAPPA is poised to explode, and, if the amount of early buzz she’s already conjured is any indication, this is going to be a wild year. Celebrating the release of her new EP (which dropped the same day as the show, and can be purchased here), platinum blonde hair and white top glowing angelically and in contrast to her band’s black attire, CAPPA performed with a poise and confidence beyond her years, capturing the crowd from the first note, and forcing a usually seated room to stand and push their way to the front.

Breezing through the tracks of her self-titled debut, the singer’s set was anchored by lush, synthy, and rhythmically dense backing from her band (including members of local pop punk outfit Summertime), capturing the nuance and sweeping nature of her studio work, while allowing the songs to breathe and resonate with a live energy and air of unpredictability. From dance-ready and enchanting breakout hits in the making “Hush” and “Killin’ It” to the more somber and experimental “Rain” and “In the Morning,” Carla showcased not only her unique artistry and vocal skill, but also her unbelievable knack for connecting with a crowd, and channeling a raw energy and reliability in her delivery. Humble, sweet, and charismatic (she encouraged the room to join in on her and the band’s “goofy dance moves”), CAPPA exhibited all of the qualities (and, most importantly, the talent) necessary for broader success and mainstream appeal.

In a noisy, wide open, and unfamiliar bar, the songstress still managed to fill the room with an unparalleled energy and warmth, sinking a genuine earnestness and emotional weight into every note. While her production is currently minimal, being a brand new artist (or a brand new chapter of an artist, at least), imagining what this show would look like in a packed theater, backed by professional stage lightning and bigger sound, is basically like looking into the near future. Only just getting started, Carla Cappa is, without a doubt, the most important new figure in Nashville pop, and I couldn’t think of a better candidate to become the catalyst to help bring national attention to the vastly underrepresented pool of talented indie artists our city plays host to. Whether or not she knows it yet, CAPPA is well on her way to becoming the next big thing, and we’re just happy to have witnessed the beginning of her journey. 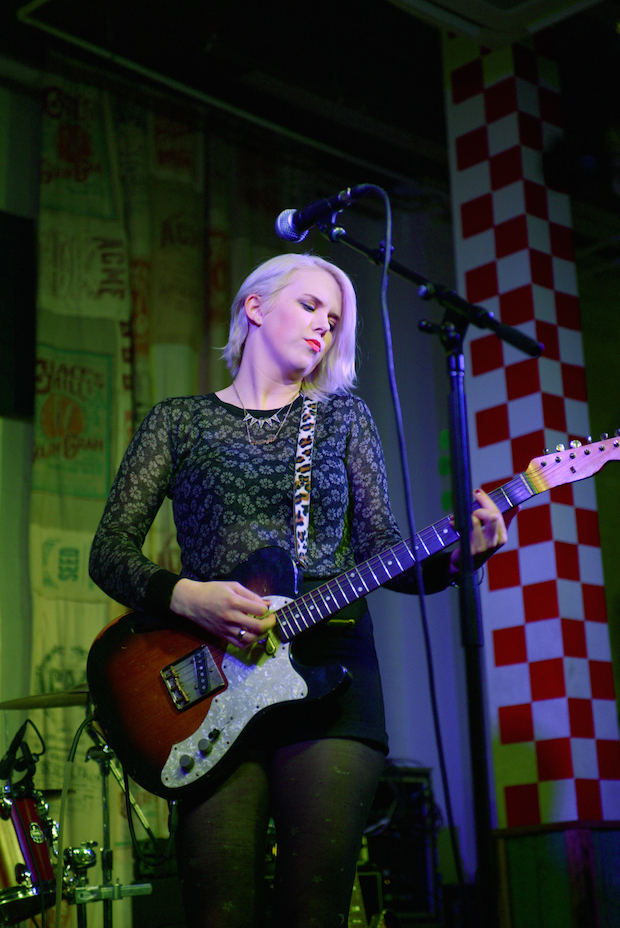 Closing out the night, Lauren Strange, a longtime friend and former contributor to this very site, and her skilled backing band, The Pretty Killers, brought a much-needed rock and roll bite to the evening. An unbelievable songwriter and powerful performer, not to mention an all-around badass, Strange has been a fixture in the local rock scene for several years now, and her band, made up of Adam Reszenski, Samuel Roberts, and Chad Rogers, are a perfect compliment to her alt-rock sound (they’re a guitar band through and through, definitely giving the evening a welcomed punch in the gut). Trudging through a wide gamut of tunes, including standouts from last year’s fantastic Say Yes EP, Lauren performed with an unbelievable polish; a flawless singer, skilled guitarist, and confident frontwoman, she’s more than earned all of the positive praise she’s amassed locally and nationally, and, in a musically just world, would be a certifiable rockstar by now (she certainly performs like one already, at least). I can’t think of many local performers who can so perfectly capture angst, and deliver it in such a digestible package, but Strange definitely excels at tapping into her core emotions and funneling them into hard-hitting, straightforward, damn good rock songs. As the crowed began to thin a little (an unfortunate symptom of weeknight shows), Lauren poked fun at a couple up front who left mid-song, and that’s one of my favorite things about her- no bullshit. Graciously shouting out CAPPA’s EP release (thanks Lauren, for turning us onto her in the first place!), Lauren and The Pretty Killers exemplified what I love about hosting these Acme shows; Nashville has so much to offer, and bringing some of the city’s best acts downtown and in your face is not too shabby of a pastime.

Our free, weekly Acme showcase continues this Tuesday, June 2, with Floralorix, My Bubba, and Kyowa then moves up to the rooftop for our special Bonnaroo edition on June 9, featuring Road to ‘Roo winners Sol Cat, Future Unlimited, and Chrome Pony. We hope to see you there!