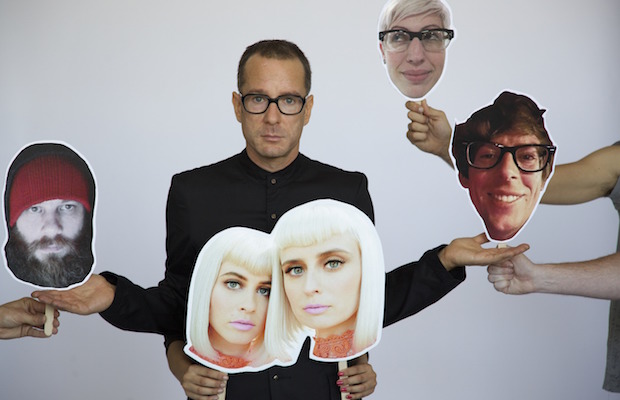 For the first time in right years, Matt Sharp-led The Rentals will return to Nashville, celebrating the release of their first album in 15 years (and third-full length overall) with a performance tonight, May 25 at Mercy Lounge with Rey Pila and Radiation City. Boasting something of a supergroup lineup in the studio these days (and not a shabby live band either), we can confidently say that the long running group are experiencing something of a second wind, and encourage you to grab tickets now to see their sure to be triumphant return to Music City. Read on for details!

When last we checked in on The Rentals, the power pop project of ex-Weezer bassist Matt Sharp, the group were gearing up to release their first album in 15 years, 2014’s Lost in Alphaville, boasting a new supergroup lineup of Lauren Chipman, Jess Wolfe and Holly Laessig of Lucius, Ryen Slegr of Ozma, and The Black Keys’ Patrick Carney. The Rentals’ new live lineup is set to include Sharp, Chipman, Slegr, Starfucker’s Shawn Glassford, Ted Gowans of Tegan and Sara, and Patti King and Lizzy Ellison of openers Radiation City. Best we can tell, this marks the group’s first Nashville date in eight years, and, while the last decade or so hasn’t managed to match their ’90s commercial apex, the band are nonetheless a wonderful staple of the indie/alt/power pop scene, and a live powerhouse you don’t want to miss!

Combining electronic and synth sounds into an indie rock informed flavor of garage rock, Mexico’s Rey Pila are a dynamic group, and recently got a much deserved bump in recognition by signing to Julian Casablancas’ (of The Strokes) Cult Records. It’s been five years since the release of the band’s eponymous debut, but their latest EP, Alexander, is a moody, indie gem that you should listen to immediately (if you haven’t already).

Rounding out the bill, Portland’s Radiation City veer more heavily into the realm of indie rock, with soaring pop sensibilities and a flair for synthy, sweeping instrumentation. They erupted onto the scene with 2011’s The Hand That Takes You, and most recently dropped Animals in Median in 2013. Show up early, or miss out.