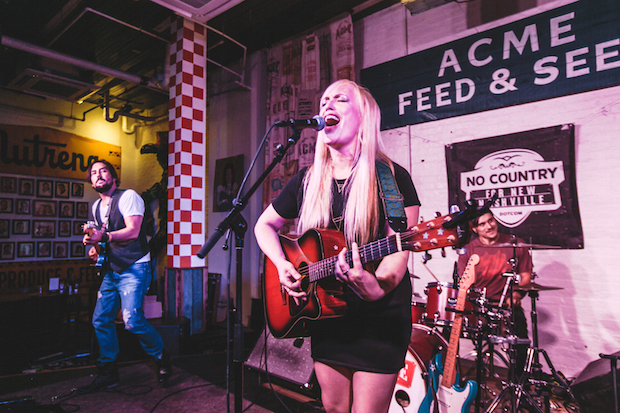 We would like to continue to welcome all of you reading this out there in Music City and beyond to Acme Feed & Seed every Tuesday night, for the weekly showcase from our live events wing, No Country Presents! This past Tuesday’s bill featured genre bending singer-song writer Jennifer Sullivan, powerful alt-rockers Aura, and indie pop up and comers All Deeds Done. Read on for a recap, and for some great shots from photographer Jake Giles Netter.

If you live in Music City for long enough, you’re are bound to make some friends who are musicians. If you write for a music blog in your free time, the chances of this happening increase exponentially. So it only seems natural that I would eventually wind up covering a band that I was well aquatinted with as people first and performers second. Also, for the same reason really, it ended up being a pretty wild/crazy night for me at Acme Feed & Seed! 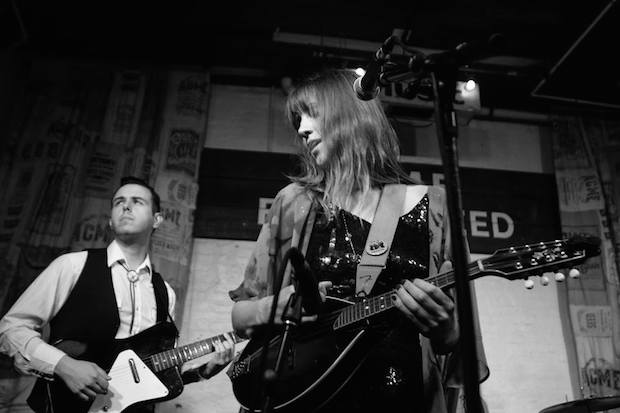 Kicking things off on a high note, local (via NYC, originally TX), singer songwriter Jennifer Sullivan’s sound is hard to tie down. Equal parts blues and jazz with Americana/folk undertones; a sound all her own. The band and her danced through genres effortlessly, and even spiced in some heavy circus organ at times for good measure. We loved her live performance of her latest single “Proof”, which we recently premiered, and she owned the stage in her sultry, possibly Catwoman inspired, minus ears/tail, outfit. She’s been no stranger to No Country coverage. We hyped her set at Bonnaroo 2014, look forward to seeing her around town, and hearing more music from her in the near future. 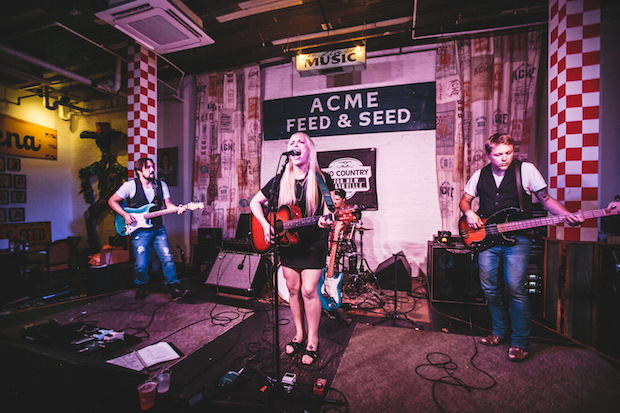 Next up were power punch packing alt-rockers Aura. Lead singer, and co-founding member Maura Murphy, is a former co-worker of mine, and we got along smashingly before I’d ever seen her perform. Now I couldn’t be more stoked to see her putting it down live and in person … in a showcase I’m directly involved with none-the-less! Her and lead guitarist, Nick Johnson, got their start performing together around Berklee College of Music, moved to LA for several years, but now call Music City home.

This new incarnation of their project together, with a new bassist and drummer, was an even bigger sound than the recorded work I’d heard. Loud in all the right ways for their new, less ballady, more early ‘90s pop grunge leanings. Nashville has a way of changing all band’s sounds, usually for the better. Her booming, powerful, and clear voice, with Nick’s extremely technical and polished guitar work, is something to behold. Highlight’s included their radio ready single “Chosen,” a cover of Radiohead’s “Creep” that nearly brought the house down, and closing out on super groovy extended jam session. This new version of the band is really cooking live, and as they perfect their sound, tweaking it as they play together more, there seems to be no limit to what they can accomplish. 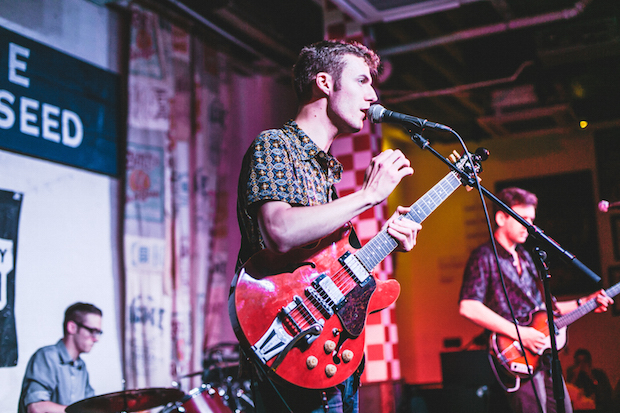 After some job well done shots of Jameson with my pals in celebration of their finished set, it was time for the All Deeds Done to close out the night of free tunage. The Bowling Green, KY, natives brought a super likable, familiar indie pop sound that immediately reminded me of Arctic Monkeys, minus the ultra-Brit accents. It was fairly obvious that they are pretty young dudes, ready to make a big splash on the a growing collaborative scene between Nashville and BG (see Cage The Elephant, Sleeper Agent, Buffalo Rodeo, Morning Teleportation, etc). They blasted through their set, which it appeared they spent a lot of time practicing, carrying themselves like professionals. Old souls, who seemed to have experience that didn’t match their years. They keep playing shows like that here in town, and you’ll be hearing them on Lightning 100 soon enough.

As the guitar fuzz faded, and my buzz got cranked to 10, it was time to head back east. Another success from No Country Presents at Acme Feed & Seed.  Enjoy the spread from Jake Giles Netter, and join us next Tuesday, when we do it all over again with Lauren Strange and the Pretty Killers, CAPPA, and Trenton.