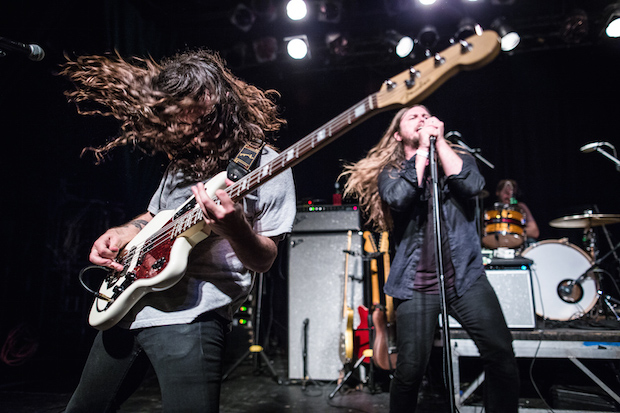 If you missed this show on Thursday night, you not only missed a chance to see three of the great rock ‘n roll bands of our day, but you also missed a chance to truly live the rock ‘n roll lifestyle. Switching your shift for the morning, or walking out early only to make enough money to buy your ticket and a couple brews at the show is worth every moment when bands like The Black Cadillacs, Avers, and J Roddy Walston & The Business are on the bill. We guaranteed you a great show and 20/20 hindsight says we underestimated how thrilling this was going to be. We understand living busy lives and trying to make ends meet. So if you could not make it, click below to get a glimpse. 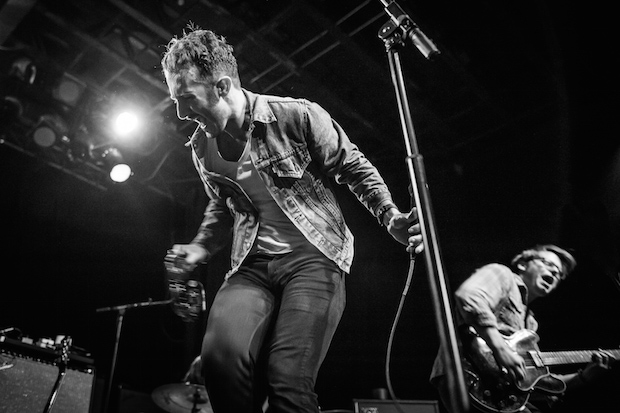 The first band to take the stage down at Exit/In was none other than Knoxville transplants The Black Cadillacs, and these guys are doing it right. After spending the last year on the road in the U.S. and in Europe, the Cadillacs were welcomed home to Tennessee with many fans and friends in the audience. This well stacked band of young men are talented, groovy, and surprisingly great dancers. The eye-catcher for this was bassist Phillip Anderson, in his Fleetwood Mac t-shirt and brown dress shoes with the soles worn thin from sliding his legs the entire set. Dancing was not the only talent Anderson shows great skill in, but rather, his slapping and driving bass lines are the accelerator pedal the ’60s/ ’70s rock of The Cadillacs. This was displayed in songs like “Shade,” from their 2012 full-length Run, that could be the song playing as the getaway car pulls out in front of the cops, after just robbing the bank off main street.

Another crowd favorite was “Methadone,” off the band’s 2015 self-titled EP, with its great vocal work performed by founding member Will Horton. This track can be heard on the radio as you and your lover flee from the fuzz and take the long and winding coastal highway to sweet freedom. The heaviest hitting song The Cadillacs performed was “100 Guns,” off the album Run. It showed the chops of both guitarists, Matthew Hyrka and John Phillips, flipping back and forth with the main melody and crescendoing into alternating solos that melted hearts and faces alike.

If The Black Cadillacs have been on your list to see for awhile, officially move them to the top. Support local and these guys will deliver a sensational show that you cannot be disappointed with. 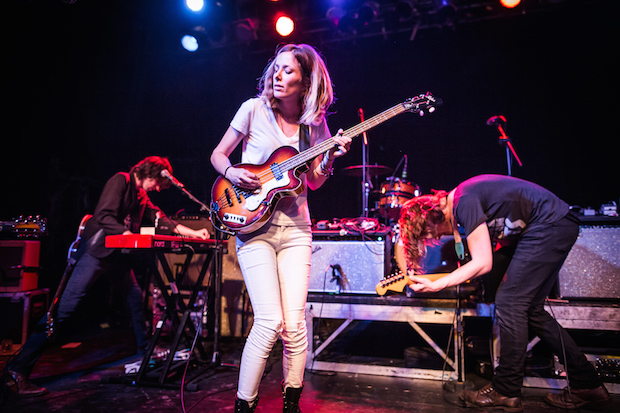 Coming out of Richmond VA, Avers are chock full of frontmen and creative geniuses from other bands such as Hypercolor, Farm Vegas, The Mason Brothers, and even The Head and the Heart. With this much talent on one stage, it is expected that creative musicianship and inspiration come from many directions. Therefore, we were not surprised to see guitars, bass, mics, and the keys responsibilities passed from member to member. With the exception of Tyler Williams, drummer of The Head and The Heart, who was fairly stationary but nevertheless the driving force behind the set, the stage was a kaleidoscope of psychedelic surf rock and fuzzy reverb guitars that sent us time traveling.

From tracks like  “The Only One,” with Hawaii 5-0 guitar licks that would even make The Beach Boys’ knees weak, to the repeated melodic grooves of “Evil” with Alexandra Spalding’s smooth reverbed vocals, Avers took us on a trip through emotions and enlightenment, all while shaking our long hippie hair to and fro.

Empty Light is the band’s only LP, and was recorded and produced by the entire band themselves in 2014. It is a soundscape of everything from ’50s rock to deep ’80s synth ballads. Be on the lookout for the all-star band Avers to see much more light in next few years. Also, according to Mr. J Roddy Walston during our soon-to-be-posted backstage interview(!!!!!), keep an eye on Richmond and anything that comes out of this up and coming city. 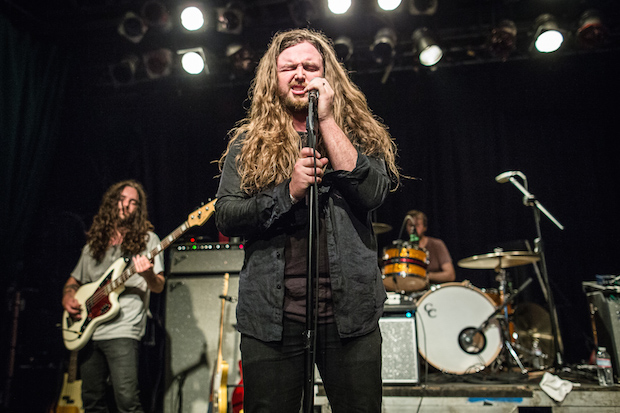 Tennessee natives J Roddy Walston & The Business took the stage to an ecstatic crowd that was actually warmed up by the youngest member of the band’s fan base. This young man, about six or seven years of age, took on the responsibility of checking all the mics while being held up by tour manager Pat Ball. Draped in an oversized J Roddy american flag shirt, he screamed “Check 1,2 Check 1,2” into every mic, and even placed his hands in the proper position on the piano suggesting that he has played before, and could be the next J Roddy.

As the next pair of hands to touch the piano were those of J Roddy himself, the bouncing and catchy 50s piano intro to “Dont Break The Needle” incited screams from the anxious crowd. One of the most astonishing things that we noticed were the high harmonies of bassist Logan Davis and guitarist Billy Gordan in songs like “Full Growing Man,” off the band’s self-titled album from 2010. J Roddy and his Business show a full spectrum of musical styles ranging from deep southern country jams like “Caroline” to newer rock ‘n roll tracks like “Sweat Shock” that hint at Led Zepplin with the signature J Roddy twist. As a good southern soul, J Roddy was raised on gospel music by the influence of his grandmother. This is exhibited in much of 2015’s album Essential Tremors during tracks like “Midnight Cry” and “Take It As It Comes.” Although each song played could be an article in itself, this was not the only note-worthy part of Thursday night. Did we mention all the hair? J Roddy himself, along with the Business, look like they have an approximate 42 inches of hair combined, and as our photos show, it was rarely stationary. J Roddy plays a Yamaha piano from the 1970s and it gets a hair whippin’ almost every song in every set they play. We would venture to say that the toughest member of this band would have to be that piano, taking a beating every night and still creating sounds like that, night in and night out.

The most emotional moment of the evening came during the encore’s second song where these southern gentlemen played their most popular ballad “Boys Can Never Tell.” Even people who have never seen J Roddy & The Business felt a little choked up during this honest confession of the male efforts in love and parental relationships. Sending us off into the night to fight The Man, work hard for little pay and come back to see them again, J Roddy & The Business closed their set with the spectacle of “Heavy Bells.” This being their most distorted and grungy song, we thought the stage was going to break before the band could finish. However, they hit their last note, thanked us for coming out, and engraved their music in our heads for weeks to come. Make sure to check out J Roddy Walston & The Business. We know your time is precious, and we would never waste it by steering you wrong.