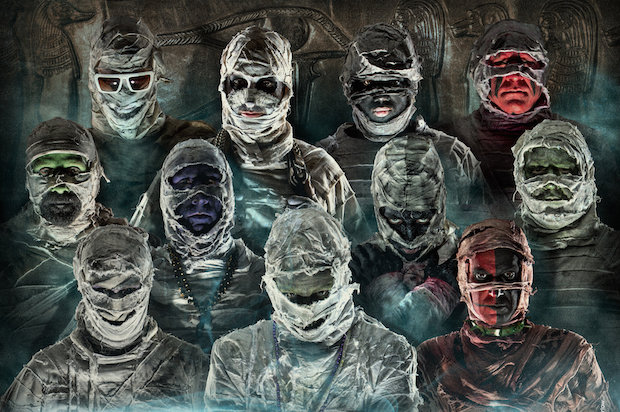 Rising from their crypts, and now back on tour; a one-of-a-kind, out of this world, super group, are planing a Music City stop. No, this post isn’t talking about the Rolling Stones, we’re talking about Here Come The Mummies announcing a show at Marathon Music Works on Halloween night! What surely started as a Halloween joke, or something goofy a group of musician friends did for kicks in the early ’00s, has proven to not just have legs, but kick fucking ass. A sometimes rotating line-up, of up to eleven musicians (none of which have ever been unmasked) blast mummified funk, rock and blues that is no laughing matter. We know they’re based in Nashville, possibly under contract studio musicians, who have to hide their identities to keep from the breaking the “rules,” but that’s about it. It’s also rumored that there are several grammy winners and possibly even a really high profile name or two, among the undead. Best part? You can download their entire catalog for free at their website.

We know it’s a long way out, but you better jump on this Marathon Music Works show for your Halloween hijinks, because we have a feeling it’s probably going to be one of the top bills in town. Explore HCTM more after the jump, and stay tuned to No Country for further details.