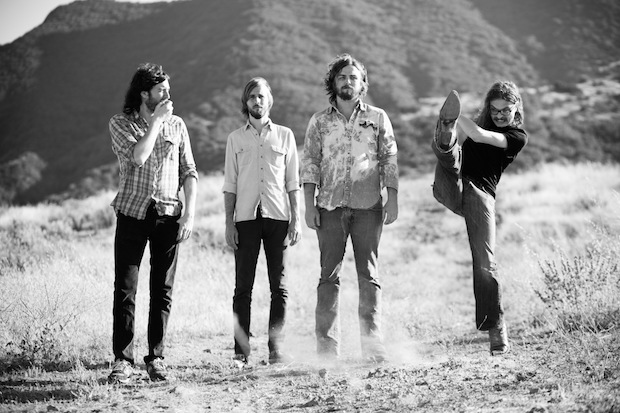 Attention all music purists: J Roddy Walston & The Business play Exit/In with Avers and The Black Cadillacs TONIGHT, May 21! They are rock ‘n roll at its finest. No filler. No bullshit. Along with Exit/In being a very intimate venue, it also gives you the best shows for a price that will never break the bank. Come down to see all three bands for just $20, and let loose the rock ‘n roll soul in all of us. Be there or be square, as they say. Read on below to find out more about the lineup.

From J Roddy’s country and gospel roots in Cleveland, Tennessee to the smashing of boat windows in Baltimore, these guys have been pleasing crowds everywhere. We caught their last show at Exit/In way back in October 2013, and we’ve been anxiously awaiting the group’s return. With the combination of the southern rock and parlor-hop vibes of The Business with the scratchy voice and pounding piano lines Walston jams out, you will inevitably find yourself dancing and jumping.

Born from a fascination with psychedelic records, Avers are a Richmond band consisting of members from The Head And The Heart, The Mason Brothers, Hypercolor, Farm Vegas, and The Trillions. The band swap instruments throughout their set and pass around the mic like a joint, creating some fuzzy trip-rock jams over reverbed voices. They performed at The Stone Fox last March, and we’re excited to see what they can do on a bigger stage like at Exit. Check out the video for “Evil” from their stellar 2014 album Empty Light.

Knoxville sextet The Black Cadillacs have been seen tearing up the Nashville stages quite frequently. Time and time again, they’ve shown us a high energy set that has been refined and perfected by their tireless days on the road throughout Europe and major festivals like Bonnaroo, SXSW, and Hangout Fest. An effortless blend of modern grunge and indie-rock, these guys are a prime example of an opener you’ll want to show up early for.